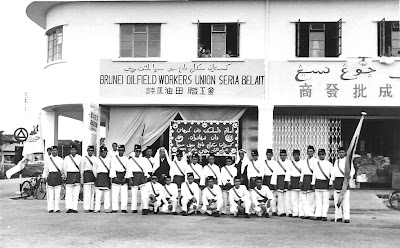 I did an article on Maulidur Rasul in my Golden Legacy column yesterday on Brunei Times, about a month behind the actual Maulidur Rasul celebrations. This time my editor was accomodating and put up about 5 of the 6 photographs which I gave him. Normally I get only about 1 photo per article. BT does pay for each photograph and the more BT publishes the more they have to pay. Though to accomodate all those photographs, I lost about 1/4 of my article - the controversial bits. You see, Maulidur Rasul has not always been celebrated throughout the world.

Anyway, this particular photograph strike me. This is typical of the uniform that was worn in the 1950s and 1960s when taking part in Maulidul Rasul. Typical cara Melayu but with a sash. I don't know why the sash. I have a number of photographs and guess what? They all have sashes. And this photograph has that interesting background - a Workers Union shop. BSP is the only organisation nowadays which has a workers union. I don't know whether there is still a union shop.