Before Oil: Cutch in Brunei

April 21, 2008
[Note: My article below was published yesterday on the Brunei Times in the usual Golden Legacy column.] 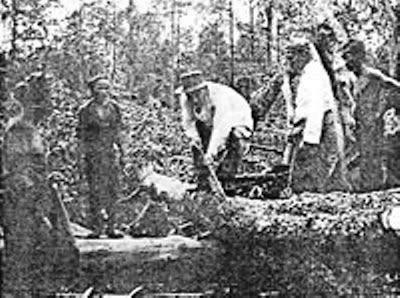 At the turn of the 20th century, Brunei's main export was neither oil nor gas. There were a number of industries then contributing to Brunei's economy. Brunei then exported among other items, livestock, hides and tallow as well as some local produce such as sago which was one of the major export items produced at Kuala Balai, Belait District's capital then.

But the most important items being exported were coal, rubber and cutch.

Coal was produced in Brooketon (today's Muara) through an open cast method. During the period of 1888 to 1924, more than 650,000 tonnes were produced. Even during World War II, the Japanese tried to reopen the mine but very little was produced then.

The coal production fluctuated depending on the world's demands but by 1924, the price fell so low that the coal mine had to be closed although it was the main source of employment opportunities and hence commercial opportunities for those living in Muara.

Rubber was first introduced into Malaya before coming to Brunei. In 1906 the then British Resident government approved a number of applications from European to open up land to be planted.

The biggest plantations were the Batu Apoi Estate in Temburong which was owned by the Liverpool (Brunei) Para Rubber Estates Limited and the Labu Estate owned by the British (Borneo) Rubber and Land Company. These produced the largest output but by the 1920s, it was the plantations around Brunei Town which did better.

Many parcels of land were handed out by the British Resident government with several large estates of over 100 acres to the big plantations. Medium sized ones of about 25 to 100 acres were handed to Chinese owned plantations and Malay owned ones were mostly small holdings.

It is estimated that by 1942 more than 15,000 acres of state land had been handed out to these plantations both big and small. The peak of production was around the mid-1920s before dying out completely by the 1950s.

Surprisingly, it was a product called "cutch" that formed the major export of Brunei before the discovery of commercial oil in 1929. What on earth is "cutch"?

Cutch is a sticky substance obtained from the wood of mangrove trees and sometimes referred to as catechoo. Cutch is obtained by boiling mangrove barks. This process produced a liquid known to Bruneian as ubar and used by local fishermen to dip their nets so that their nets became stronger and lasted much longer.

Cutch was therefore used to dye nets, sails and cloth and for colouring leather. So it is much used in the tanning or leather industry as well as in the fishing industry. Since this is obtained from mangrove trees and mangrove formed a large proportion of Brunei's coastal and riverine vegetations, this easily became Brunei's main export earnings then. Brunei had economic potential to be a large producer of cutch and hence raised commercial interests from Western companies to produce it.

Barks were easily obtained from the plentiful mangroves along Brunei River. These trees were cut down and their barks were stripped off. These barks were collected and brought up river by boat to the factory. These barks were then cut into pieces and crushed before being boiled. The liquid was evaporated to produce cutch which was a brownish red sticky substance. This substance was further hardened into large blocks or balls to enable it to be exported.

Despite the many commercial interests, only one company emerged and was given monopoly rights by His Majesty Sultan Hashim to collect mangrove barks and produce cutch in Brunei. The company was the Island Trading Syndicate. Peter Blundell, the author of The City of Many Waters, the only known book written about Brunei, was at first the engineer for the company when he arrived in Brunei at the turn of the 20th century.

The company was established in Brunei Town in 1900. It opened its cutch factory the following year in Subok by the banks of the Brunei River. Some said that the current location of the Brunei Handicraft Centre is where the factory used to stand.

Before the oil industry emerged, the cutch factory hired the largest number of labour in Brunei. Many villagers living in Kampong Ayer worked for the company. According to estimates, as many as 1,000 people worked for the company, about 700 of them collecting the barks from the mangrove trees and about 200 processing the cut barks at the factory. With such a large workforce, it is no wonder that cutch was the largest export at that time.

At the same time, there was a number of services industries as well that sprang up around cutch exports. The best opportunity was in the shipping industry where a number of Bruneians were recruited.

Brunei's cutch was sold mostly to Britain but some was also sold to Japan, China and the United States. The Americans halted the cutch exports in 1907 by imposing high tariffs. By 1911, the company produced its highest export of almost 3,000 tonnes. The demands kept on increasing but unfortunately the company was unable to produce supplies to keep up with the demand.

By the 1920s and 30s, barks had to be collected from mangrove trees outside Brunei Town. There were not enough mangrove trees around the Brunei River as there was insufficient control of cutting down of trees around Brunei Town leading to wasteful felling. This reduced the supply of barks. Supplies had to be obtained from North Borneo (Sabah) as well as Tutong and Belait.

Despite being the largest employer, the company was unable to get people interested in being employed there. There was inadequate workforce as other industries opened up. This included fishing as well as the other industries such as rubber and oil by the 1920s and 1930s. These other industries brought more income.

The company also depended on shipping through Labuan. At first the company relied on the Sarawak Government, which ran a steamer from Brooketon to Labuan but that stopped in the 1920s. It relied on other vessels plying between Labuan and Brunei but that was not enough. WWI also imposed restriction on cutch output.

By 1917, cutch production declined and by 1918, it declined even further. In 1921, coal brought in more revenues than cutch and by 1923 even rubber exports brought in more revenues than cutch. By the 1930s, oil became Brunei's main export revenue earners. Despite the setback, cutch production continued and stocks continued to pile up by the 1930s.

However, by 1938, production was drastically reduced. It was no longer feasible or profitable for the company to continue as by then all its barks came from North Borneo.

The company concentrated on its new factory outside Brunei in Rajang Sarawak and thus ended Brunei's export of cutch.

The only remnant of the cutch industry is an old rusting boiler used by the company now being displayed at the Malay Technology Museum in Kota Batu.