Showing posts from March, 2016
Show all

The Sireh Leaf and Betel Nut Culture in Brunei 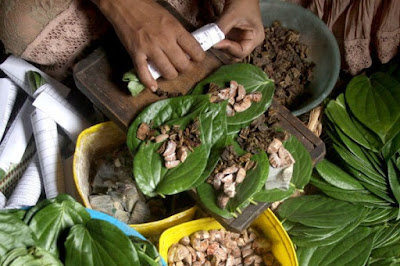 File photo of elderly Malay-Dusun community about to enjoy a chewing session as they fill their ‘sireh’ leave with condiments from a ‘celapa’ during a traditional wedding showcase. Picture: BT file Rozan Yunos Bandar Seri Begawan Sunday, March 27, 2016 IT WAS not that long ago that Bruneians’ mouths were red from chewing their ‘sireh pinang’, which a mixture of ‘sireh’ leaf mixed with tobacco, slaked lime and areca nut. WH Treacher in his book ’British Borneo: Sketches of Brunai, Sarawak, Labuan and North Borneo’ (1891) wrote that in Brunei, “both before, during and after a day’s work, the Malays, man and woman, boy and girl, solace and refresh themselves with tobacco and with the areca-nut, or the betel nut as, for some unexplained reason, it is called in English books, though betel is the name of the pepper leaf in which the areca-nut is wrapped and with which it is masticated.” It was a common practice, not just among Bruneians, but throughout the region to chew
Post a Comment
Read more 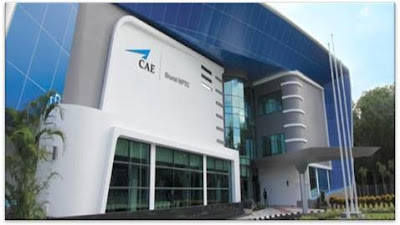 The multi-purpose training centre, a 60:40 joint venture between Montreal-based simulation and training provider CAE and Brunei Darussalam’s Ministry of Finance, represents a significant non-energy investment, valued at just over $100m. Royal Brunei Airlines historic all-female flight deck from Bandar Seri Begawan to Jeddah The Oxford Business Group had this report on Brunei:- +++++ Brunei Darussalam Transport Economic News Update 16 Mar 2016 The aviation industry in Brunei Darussalam is looking to expand its contribution to the economy, with a new code-sharing agreement and ongoing investment in flight training facilities expected to increase passenger figures and stimulate employment. In mid-February Royal Brunei Airlines (RBA) finalised a code-sharing agreement with Turkish Airlines (THY) that is expected to increase passenger demand for flights into the Sultanate. Network reach Under the agreement, which came into force on February 22, passengers of
Post a Comment
Read more 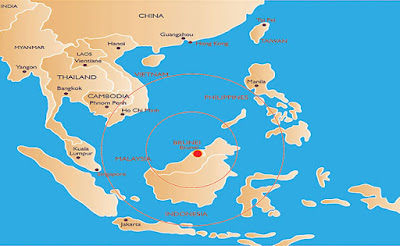 If Asean were to be considered as a single country, it would be the 7th largest economy in the world, with a population of 622 million people. Brunei Darussalam is at the centre of Asean The next stage of integration for Asean was agreed last year through the AEC 2025 Blueprint, with the focus for Asean economic integration set out through five key characteristics Local products have benefitted in terms of product design and packaging techniques from programmes provided for SMEs through the third pillar of AEC. PHOTOS: MOFAT AEC 2015: What it means for Brunei on: March 20, 2016 THE Asean Economic Community (AEC) has been formally established by the countries of the Association of the Southeast Asian Nations (Asean) on December 31, 2015. But what exactly is the AEC, and what does it mean for Brunei Darussalam? According to a press release from the Ministry of Foreign Affairs and Trade (MoFAT), the creation of the AEC in 2015 is simply another milestone, albeit an im
Post a Comment
Read more

Si-Tanggang and The Theory of Human Origins 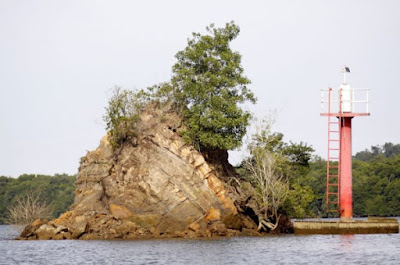 Brunei's Jong Batu resembled the keel of a ship said to be transformed to rock because the son was ungrateful to the mother and he was punished Rozan Yunos BANDAR SERI BEGAWAN Sunday, March 20, 2016 IN THE book “Malay Magic” (1900) written by Walter William Skeat, there were many descriptions of the Malay world-view and of techniques – Malay magic – for dealing with its uncertainties. The Journal of the Malayan Branch of the Royal Society of Arts (JMBRAS) which reprinted Skeat’s 1900 book in 2005 commented on his book that in describing the Malay magic, Skeat begins with the Malay traditional picture of the world, the creation of it and man’s place in it. Then comes an account of the supernatural beings with whom the Malay villager, often using the services of the local magician (pawang), had to deal, in order to conciliate or even manipulate them. After putting Malay village life in this context of tradition and belief, Skeat comes to his main subjects, which take up about t
Post a Comment
Read more

March 20, 2016
The World Policy Institute posted an interview with YB Pehin Dato Lim Jock Seng, Brunei's Minister at the Prime Minister's Office and Minister of Foreign Affairs and Trade II on 16th March 2016. Founded in 1961, the World Policy Institute, a non-partisan source of informed policy leadership for more than four decades, develops and champions innovative policies that require a progressive and global point of view. Here is the published interview: +++++ Brunei, a Southeast Asian nation with a population of only 400,000, ranks among the world’s wealthiest nations per capita due to its extensive oil and gas resources. Situated strategically on the South China Sea and a member both of APEC and ASEAN, it is also a central player in the Trans-Pacific Partnership trade pact now awaiting Congressional action. David A. Andelman, editor emeritus of World Policy Journal, sat down with Yang Berhormat Pehin Dato Lim Jock Seng, Brunei’s Second Minister of Foreign Affairs and Trade and a cl
Post a Comment
Read more 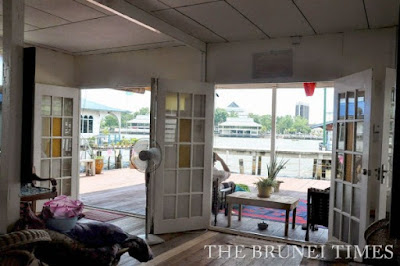 Azli Azney BANDAR SERI BEGAWAN Sunday, August 30, 2015 IT WAS a desire to share her beloved childhood and heritage that drove Dk Kemariah Pg Hj Duraman to open up her grandfather’s house and convert it into a cosy bed and breakfast for locals and tourists alike. Hearing about it from a friend, I decided to pay Kunyit 7 Lodge a visit by making a short boat trip to the house, less than one minute from the Yayasan jetty in Bandar, where I met the gregarious owner of the lodge, who is also known as Kem for short. The house, located right behind the No 2 jetty of Kampung Bakut Berumput at Kampong Ayer, has a mixture of classical Bruneian architecture – there since the 1920s and was last rebuilt in 1988 – and modern with the recycled wooden furniture, the decking and the French doors. Named after her late grandfather, Pg Tujoh, which means seven in English, and the fact that he loves the spice Kunyit, or turmeric, the lodge is both a homage to her late grandfa
Post a Comment
Read more

The Missing Kingdoms of Borneo 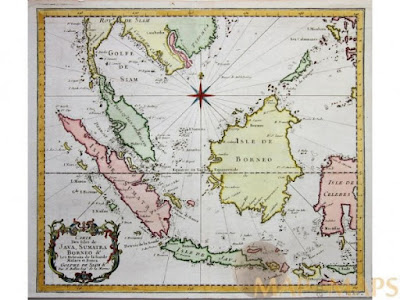 Rozan Yunos BANDAR SERI BEGAWAN Sunday, March 13, 2016 IN most history text books, one will find that many areas around the Borneo Island to be littered with ancient kingdoms and sultanates. Most of the well-known ones obviously are Brunei or Bo-ni or Po-ni or the various ancient names of Brunei; Kutei, Bolongan, Pasir, Banjarmasin, Sukadana, Pontianak, Mempawah, Landak and Sambas. Other than Brunei, most of these kingdoms were found in the southern and western parts of the Borneo Island. However, in the north and north east, other than Brunei, there are no ancient states or kingdoms stated. Sarawak and North Borneo as separate states were in the maps only towards the end of the nineteenth century. One answer could be is that the Brunei Kingdom had been in control of these areas for so long that in most maps, only the Brunei kingdom was ever known. However if we go deeper, we will find that there are other kingdoms or states which existed in these areas in the past which had been p
Post a Comment
Read more

From Oxford Business Group on 29 February 2016: +++++ Competition heats up in Brunei Darussalam’s telecoms industry Brunei DarussalamICT Economic News Update 29 Feb 2016 Faced with an increasingly competitive marketplace, Brunei Darussalam’s telecoms operators are working to broaden their services as they look to attract new customers and gain market share. The coming months are expected to bring significant developments across the Sultanate’s telecoms industry, in the form of infrastructure advances and a regulatory overhaul. Expansion strategies, which include overseas link-ups and the rollout of competing 4G coverage, should improve service and speed, and generate cost benefits for mobile customers. Market foundations Although a relatively small market, Brunei Darussalam benefits from substantial telecoms penetration; the country reached 100% digitalisation of the phone network in 1995, while mobile penetration surpassed the 100% mark in 2008. According
1 comment
Read more 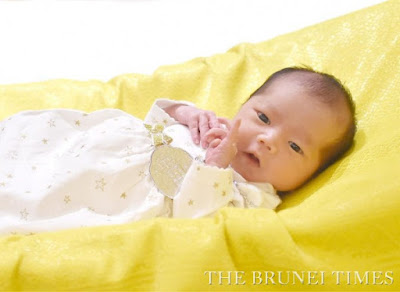 BANDAR SERI BEGAWAN Thursday, March 10, 2016 By the command of His Majesty Sultan Haji Hassanal Bolkiah Mu’izzaddin Waddaulah, the Sultan and Yang Di-Pertuan of Brunei Darussalam, the Office of His Majesty yesterday announced that the monarch’s newborn granddaughter has been named Yang Amat Mulia Pengiran Anak Muthee’ah Raayatul Bolqiah . His Majesty’s granddaughter was born at 1.09pm on March 2, 2016 to His Royal Highness Prince ‘Abdul Malik and Yang Amat Mulia Pengiran Anak Isteri Pengiran Raabi’atul ‘Adawiyyah . Their royal wedding was in April 2015, 11 months ago. His Majesty and Her Majesty Duli Raja Isteri Pengiran Anak Hajah Saleha expressed their gratitude to all those involved during the delivery of the monarch’s granddaughter, and for the messages of congratulations received following the royal birth. Picture: Infofoto The Brunei Times
Post a Comment
Read more

Closing the Gender Gap in Brunei 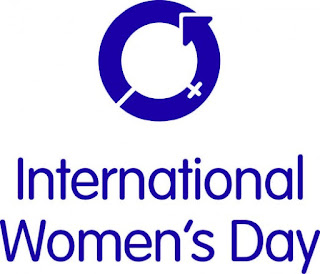 Quratul-Ain Bandial BANDAR SERI BEGAWAN Tuesday, March 8, 2016 WOMEN all over the world continue to contribute to economic, social, cultural and political growth. But based on the World Economic Forum’s (WEF) Global Gender Gap Report 2015, today’s observance of International Women’s Day is dimmed by the fact that progress towards gender parity has slowed in so many places. While Brunei has made remarkable strides in achieving gender equity, it has only managed to close the gender gap by 4.5 per cent in the past eight years, according to the WEF’s latest report. In the WEF’s Global Gender Gap Report 2015 – which measures the level of disparity between men and women – the sultanate ranks 88 out of 145 countries, moving up 10 places due to more female legislators, senior officials and managers, as well as professional and technical workers. Brunei has a near perfect score for gender parity in education and health, and also ranks highly in women’s participation in the economy,
Post a Comment
Read more 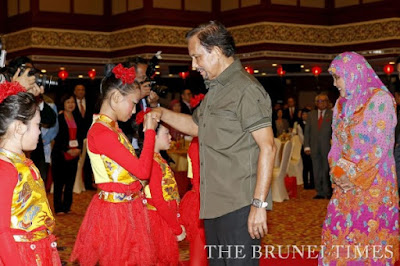 The Relationship Between Brunei and Minangkabau 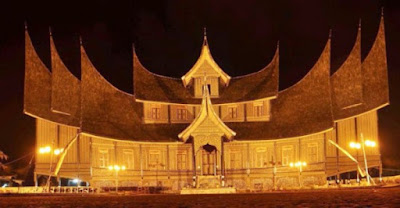 A replica of the Istano Basa Pagaruyung or Pagaruyung Grand Palace seen during the night. The original building was burnt down by the Dutch in 1804 and it was later rebuilt in 1976. The Bagonjong roof is used on most of houses and government buildings in West Sumatra. Picture: Courtesy of Rozan Yunos Collection, www.istanobasapagaruyung.com Rozan Yunos Bandar Seri Begawan Sunday, March 6, 201 BRUNEI Darussalam is associated with some of the former sultanates in Indonesia. Two in particular was the Sultanate of Sambas and the Sultanate of Matan. The Sultanate of Sambas connection can be attributed to Sultan Tengah, the first Sultan of Sarawak and the younger brother of Sultan Abdul Jalilul Akbar, the 10th Sultan of Brunei who married the sister of Sultan Muhammad Safiuddin, the Sultan of Sukadana. After Sultan Tengah left Sukadana to go to Matan, his eldest son, Radin Sulaiman carried on his father’s work in propagating Islam, and eventu
1 comment
Read more
More posts