Showing posts from November, 2011
Show all

[The Oxford Business Group on 14th November 2011 reported the following news.] +++++ Brunei Darassalam: Flying high Brunei Darassalam’s skies are set to get more crowded and its international airport busier, with an increasing number of airlines looking to serve routes to the Sultanate and the country’s own flag carrier positioning itself to maximise returns by sharpening its focus on the regional market. Having built up an enviable reputation for quality and service since being founded in 1974, Royal Brunei Airlines (RBA) has encountered some difficulties in recent years, coming under increased pressure on some of its more lucrative long-haul routes and seeing lower returns on some of its less frequented runs. In particular, soaring fuel costs have reduced the airline’s earnings, prompting a review of operational practices and routes earlier this year, after which it was decided that RBA would cut a number of its well-established routes – including to Auckland, Brisbane and Ho C
Post a Comment
Read more

November 08, 2011
[The Oxford Business Group reported the following news on 7th November 2011.] +++++ Brunei Darussalam: Building bridges Brunei Darussalam’s construction sector is set to benefit from a number of new infrastructure projects coming off the drawing board in the next year, two of which will have particular significance for the Sultanate’s domestic economy and integration with its neighbours. On September 13, officials from the Sultanate and Malaysia signed a series of agreements that laid out the terms and conditions for the construction of a bridge spanning the Pandaruan River, which forms part of Brunei Darussalam’s border with Sarawak, Malaysia. Though the river is just 20 metres wide, those travelling between Temburong and the Limbang district of Sarawak must use a ferry service with limited capacity, which causes long delays during peak hours. The joint committee established to oversee the project should be calling tenders for the construction in December, with five contr
Post a Comment
Read more

November 07, 2011
[I first wrote about Hari Raya Aidil Adha way back in 2008. I thought I will rewrite it with fresh material and published it in my Golden Legacy column on The Brunei Times edition 7th November 2011.] +++++ EID UL Adha (Aidil Adha) is Hari Raya Haji to Bruneians. Moon sighting at various locations in Brunei would be held at the end of Zulkaedah to determine when the beginning of Zulhijjah would be and hence would also affect when Aidil Adha will be celebrated in Brunei. In the past the moon sighting for Zulhijjah was not practiced and Zulhijjah was determined using hisab or calculation. However the Aidil Adha celebrations in Brunei are not widespread compared to Eid ul Fitr or Hari Raya Aidil Fitri to mark the end of the Ramadhan fasting month. Aidil Adha celebrations in Brunei are rather muted compared to most other Muslim countries. Nowadays, after the Aidil Adha prayers at the mosque, many do not do anything. In most other Muslim countries, the Aidil Adha celebrations would be
Post a Comment
Read more 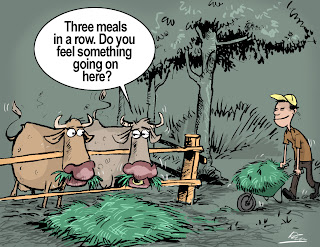 It has been a while since I last showed Cuboiart's cartoon. Cuboiart is probably the single Bruneian I do know that can make this caricature come to life. The subtlety of his drawing is just unprecedented. This one depicts the Hari Raya korban. The one he did for Thursday's is even hilarious. Catch cuboiart on www.cuboiart.blogspot.com .
Post a Comment
Read more

Ketupat Basing at the Empire 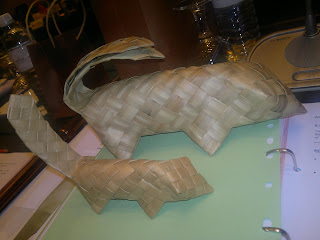 This was sold by a village in Tutong. For those wondering what this is, this is ketupat made in the shape of a squirrel or tupai in standard Malay or basing in Brunei Malay. There are a number of sellers selling their village's products currently at Level 4 at the Empire Hotel outside the Indera Kayangan Ballroom. They were invited to do that as a showcase to how they can help transform their lives. The ASEAN Meeting currently taking place inside the ballroom is the ASEAN Ministerial Meeting on Rural Development and Poverty Eradication. Currently the Senior Officials are still meeting. The Ministers will meet tomorrow after the opening ceremony done by the Crown Prince. I was searching for this ketupat when I did my article on the history of ketupat. I knew this kind of ketupat existed. I wrote this paragraph for my article  Ketupat is also used as a religious offering for some of the indigenous races. Elderly Dusun people called it "tebuu". However the ketupat
Post a Comment
Read more
More posts