Showing posts from September, 2012
Show all

The SEA Write Award for Brunei

I had an interesting day yesterday. I chaired two panels at Dewan Bahasa identifying potential writers and poets in Brunei Darussalam to be the next worthy recipient of the Southeast Asia Writers Award or SEA Write Award as it is always known and the MASTERA Awards. I have to admit that the meeting was literally intellectually stimulating when you have a few people who are icons and diehards of the Brunei Malay literary community discussing about books, poets and writers. Most people in Brunei have always known whenever they hear the word SEA Writer Award and MASTERA, they will know it as an award given for literary significance. Like me before joining the Ministry of Culture, Youth and Sports, most general public do not really know the awards. Most have heard about the S.E.A. Write Award, or Southeast Asian Writers Award. The late Rosli Bidin, Borneo Bulletin's reporter was awarded the SEA Write Award back in the early 2000. In fact the SEA Write Award has been presented annu
1 comment
Read more

September 22, 2012
Yogyakarta, Indonesia - Culture represents the most important factor for political and social stability, while ignorance, a lack of appreciation and intolerance towards culture and religion can result in insensitivity, misunderstandings, strife and civil disputes. This was stated by the Minister of Culture, Youth and Sports, Pehin Orang Kaya Pekerma Laila Diraja Dato Seri Setia Awg Hj Hazair bin Hj Abdullah on Tuesday while speaking at the 5th Asia-Europe Meeting (ASEM) Culture Ministers' Meeting in Yogyakarta, Indonesia. "This has been seen on recent television, how insensitivity towards culture and religion has caused violence and social chaos," he said. "We need to work together towards creating harmony and improving understanding towards universal cultural diversity. We also need to work together to handle this issue so that it is not misused by certain parties in the interest of their own agendas," he added. During the meeting, Pehin Dato Hj Hazair
2 comments
Read more 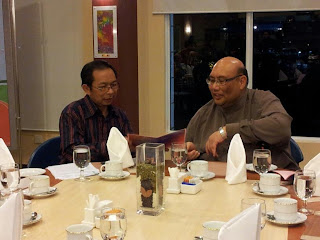 A couple of weeks ago, I was invited to be the guest of honour at the Tarindak D'Seni restaurant for Malam Bicara Sejarah. It's a new method, certainly for Brunei, to introduce history. The History Centre invited a few speakers to speak on specific topics. Three topics were chosen, one was about Sultan Hashim, an Islamic historian who apparently many people know but somehow has escaped me by the name of Ibnu Khaldun and the third was about our own historian, Pehin Jamil. The talks were interesting and certainly opened up a few minds. However the Brunei Times have captured the story as follows:   +++++ History buffs discuss historical figures Low Leng May BANDAR SERI BEGAWAN Sunday, September 9, 2012 OVER 100 history enthusiasts and academics attended the History Talk to discuss the contributions of important figures in history in an event held at the Brunei Arts and Handicrafts Training Centre yesterday. Organised by the Brunei History Centre, the talk fo
Post a Comment
Read more
More posts