Showing posts from January, 2013
Show all

Royalty at Sports Fest in 1970s 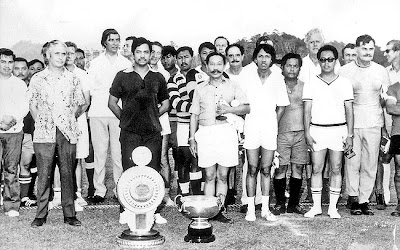 Royalty at Sports Fest in 1970s by Haji Mohd Daud Abdul Rahman Published in Borneo Bulletin on 19th January 2013 ONE can fondly remember of the days way back when royalties along with state dignitaries would embark to the Padang Besar Bandar Brunei to compete in a Sports Fest. The most favoured games were the tug-of-war, football friendly match and the sack race. Leading the sporting events were His Majesty the Sultan and Yang Di-Pertuan of Brunei Darussalam, Al-Marhum Sultan Haji Omar ‘Ali Saifuddien Sa’adul Khairi Waddien, His Royal Highness Prince Mohamed Bolkiah, His Royal Highness Prince Haji Sufri Bolkiah, His Royal Highness Prince Haji Jefri Bolkiah, along with other royal family members. The sack race was participated by Al-Marhum Begawan Sultan, heads of department and Pehin-Pehin Manteri, whereas the tug-of-war commenced with the team from His Majesty went head-to-head against heads of department led by Allahyarham Pehin Awang Haji Hussin, the Social Welfare Officer. The fo
Post a Comment
Read more

January 30, 2013
Economic Update from The Oxford Business Group on 24th January 2013: +++++ Brunei Darussalam: Islamic banking earmarked for further growth Asia | 24 Jan 2013 The Islamic banking segment strengthened its position within Brunei Darussalam’s financial services industry last year on the back of rising demand that led to the launch of a new bank and major bond issuances. Having moved early to establish sharia-compliant services, the Sultanate is now well placed to carve out a niche for itself as an international Islamic banking centre. However, the industry will need to address a number of challenges, led by a shortage of skilled workers, if it is to fully support the segment’s development. In mid-October, Standard Chartered Bank Brunei (SCB) said it was mulling plans to introduce Islamic banking products this year to meet increased demand for sharia-compliant banking services in the Sultanate. SCB’s announcement followed the September launch of the Islamic Bank of Brunei, which replaced
1 comment
Read more

Memories of the Brunei River Regatta 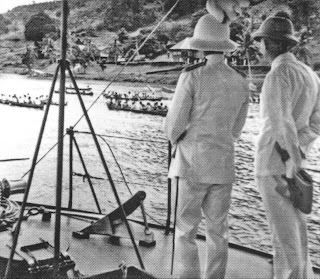 The Brunei Regatta in the 1930s watched by the British Resident (Source: Brunei Archives) Memories of the Brunei River Regatta By Rozan Yunos Published on The Brunei Times on 28th January 2013 After last year’s successful regatta, this year’s regatta at the Brunei River is expected to be an even bigger success. The Brunei Times on 25th January 2013 noted that a staggering number of competitors from Brunei and abroad have already signed up for ‘Regata Brunei Darussalam 2013’ to be held on 3 February - and even more are expected to take part including teams from Australia, Indonesia, Malaysia and the United States. His Majesty the Sultan and Yang Di-Pertuan of Brunei Darussalam will be signaling the start in the afternoon whilst His Royal Highness the Crown Prince, will be in the morning. This year there will be 12 traditional boat race events, four speed boat events and two each for water taxis and jet skis. The boat race categories include the 12, 20, 25 and 30 Rowers Boat R
Post a Comment
Read more 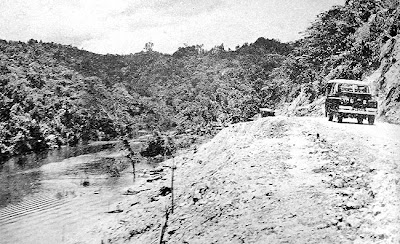 From Borneo Bulletin Archives   MAY 4, 1968 – Sappers from 67 Gurkha Independent Field Squadron have played a small but important part in launching the Brunei Government’s Temburong roading project.   Last year the squadron undertook to build the first access road for the contractors. It runs southwards for about three miles from the Bangar-Limbang road alongside the Sungai Pandaruan as far as Bukok.   And what a job it has turned out to be.   Gurkha plant operators have been on a seven-days-a-week working schedule to try to beat the bad weather. More than 50 per cent of working time has been lost through rain, which rapidly turns freshly-worked surfaces into sticky, unworkable mud if they have not been packed by rollers.   Just south of Kampong Belais a hillside section about 300 yards long has started to creep towards the river.   And on the home straight across low-lying padi land to Bukok an 800-yard stretch has to be built across soft, spongy ground, whic
Post a Comment
Read more 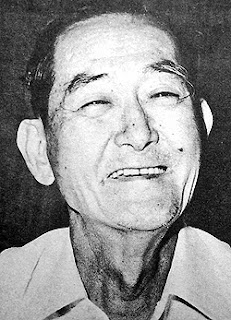 From Borneo Bulletin Archives BANDAR SERI BEGAWAN (December 16, 1972) – If Brunei’s Chinese want a happy, stable life then they should learn more Malay, according to Brunei’s Chinese Privy Councillor, Pehin Datu Temenggong Dato Seri Paduka Awang Lim Cheng Choo. Earlier this week, he said he would like to see more teenagers learn the native language. Most Chinese, he said, could speak a little Malay, but few were proficient at it. “They must make a more serious attempt so they can mix more freely. Then everyone will get on better,” he said. In an hour-long interview, Pehin Lim also said he would like to see the capital’s commercial centre expanded or modernised – and the State putting greater emphasis on agriculture. He said that 100 shops were far too few for a capital, but neither did he want a conglomeration of skyscrapers. Brunei should also become less dependent on other countries for its supply of food. There was plenty of available farm land which he thought could be cultivated
Post a Comment
Read more

Car Made for a King 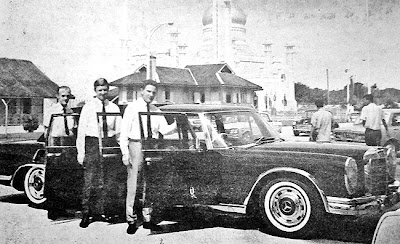 From Borneo Bulletin Archives JULY 20, 1968 - This sleek black car, the first and only six-door Mercedes-Benz 600 Landaulet built, arrived in Brunei Town earlier this week for delivery to the Sultan. Standing by its open doors are (from left) Mr Leon Gyselman, Manager of Borneo Traders, which is the Brunei agent for Mercedes cars, Mr J C Gorgels, the Daimler-Benz factory representative in Singapore and Mr Hans Hoffmann of Daimler-Benz’s export service. Mr Gorgels and Mr Hoffmann came to Brunei with the Malaysian agent’s central service manager and an assistant to carry out the final preparation of the car before delivery. Mr Gorgels said the Sultan’s car is the only six-door Mercedes 600 that has been made with a landau top, which folds back. The car was hand-made. The 21-foot-long car weights 2.8 tonnes. It is powered by a 300-horsepower V8 fuel-injection petrol engine.
Post a Comment
Read more

Coronation of the Sultan 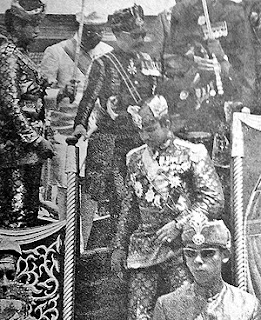 From Borneo Bulletin Archives   AUGUST 3, 1968 – Sultan Hassanal Bolkiah Mu’izzaddin Waddaulah, 22, was crowned as the 29th ruler of Brunei in traditional ceremony in Brunei Town on August 1, 1968.   He drove through the sunny streets of his capital in a state coach drawn by 50 soldiers to the newly-completed Lapau, where his father, the Begawan Sir Omar ‘Ali Saifuddien, placed the crown on his head.   Dignitaries from far and near watched the ancient ritual in the Lapau, while thousands of citizens and visitors crowded vantage points in the centre of the city, access to which (except for official vehicles) had been restricted from early in the morning.   After a traditional Muslim bathing ceremony at the Istana, heralded by a 21-gun salute, the Sultan rode in his new six-door Mercedes landaulet, with the rear roof lowered so that he was visible.   At the Fire Station, the Sultan dressed in red and gold ceremonial dress, glittering with the insignia of his decorat
Post a Comment
Read more

29th September, 2009, Brunei Darussalam's 1959 Written Constitution is 50 years old. The Brunei Written Constitution and Brunei Agreement was signed on 29th of September 1959 between Brunei Government and the British Government at the Lapau Building, in Bandar Brunei. Through the declaration, the status of the country has been glorified in the international arena and Brunei developed in all areas including programmes towards the excellence of the race and nation. Almarhum Sultan Haji 'Omar 'Ali Saifuddien Sa'adul Khairi Waddien is the person who played important roles in the realization of the existence of constitution and to clear a way towards Independent Brunei. The late monarch declared plan to set up Written Constitution for Brunei in early May 1953. Al-Marhum stated his desire and ambition in his own Syair Perlembagaan. In line with the decision of the Legislative Council Meeting on the 10th April 1953, a seven-member committee was appointed and assigned to
Post a Comment
Read more

January 11, 2013
The Oxford Business Group published the following Economic Update on Brunei Darussalam: Brunei Darussalam: Year in Review 2012 Asia | 10 Jan 2013 While overall growth in Brunei Darussalam’s economy slowed in 2012, expansion in the non-oil and gas sector suggested that some of the Sultanate’s diversification efforts are gaining traction and should pave the way for government plans to target value-added production. The Department of Economic Planning and Development (JPKE) announced in December that GDP growth contracted to 1.6% in 2012, down from 2.2% the previous year. Slower growth, the JPKE said, was due to a drop in oil and gas output, together with a fall in liquefied natural gas (LNG) production. In October, the Asian Development Bank and the IMF both revised their growth projections for the Sultanate down to 1.5% and 2.7%, respectively, based on lower output of resources. However, non-oil and gas sector growth rose by 4% in 2012, the JPKE said, driven mainly by expan
Post a Comment
Read more

A documentary by the Malayan Film Unit filmed in 1958 showing the celebrations of Sultan Omar Ali Saifuddien III with other members of the Royal Family including the current Sultan Hassanal Bolkiah at the opening of the Sultan Omar Ali Saifuddin Mosque. Also present are other regional leaders, and politicians of the newly formed Federation of Malaya, Tunku Abdul Rahman. The film shows glimpses of Brunei - Brunei Darussalam - over half a century ago - with views of Brunei Town (now Bandar Seri Begawan), Kampong Ayer and elsewhere in the country, notably the activities of the Shell Brunei Petroleum Company at Seria.
Post a Comment
Read more

Bandar Seri Begawan, January 1st, 2013 - The Permanent Secretary at the Ministry of Culture, Youth and Sports, Awang Haji Mohd Rozan bin Dato Paduka Haji Mohd Yunos during the unveiling of a logo in conjunction with the Brunei Scouts Association's (PPNBD) 80th anniversary at its building at Jalan Gadong yesterday, said, "As it is among the oldest organisations in civil society, the Scouts Association carries the potential to play a significant role in assisting the development of the country. The Scouts Association, in my eyes, can be looked at two ways - as a youth formation and as a volunteer-based organisation." Awang Haji Mohd Rozan, who himself is a former scout member of the Sekolah Melayu Datu Mahawangsa Lambak scout troop in 1971, congratulated the Brunei Scouts Association on their 80th anniversary. "The 80th year anniversary for any association is an accomplishment. It is quite remarkable. It is an achievement which has succeeded in going past th
Post a Comment
Read more

Reminiscing the Golden Era of BSB 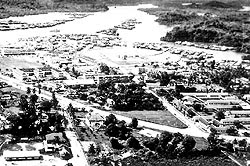