Showing posts from August, 2011
Show all

My third book "Our Brunei Heritage" will be available at The Best Eastern bookshops and will also be available at other bookshops very soon. This third volume comprises of articles that I wrote for my column The Golden Legacy in The Brunei Times for the year 2009. Limited copies are also available directly from my office. The 51 articles in the book are as follows: Sultanate of Sambas - Descendants from Brunei The Streets of Bandar Seri Begawan The British Residents of Brunei Darussalam A Short History of the Immigration Department The Historic Kampong Mentiri The Brunei National Flag The First National Day Celebrations 1984 Sultan Muhammad Hassan The Maulidur Rasul Celebrations in Brunei The Origin of Brunei's Legislative Council Dewan Bahasa dan Pustaka Brunei Through Other People’s Eyes A City of Many Waters Kampong Burong Pingai Berakas 50 years on dry land In the Aftermath of World War II The 1905 Belfeld Report The Post War Political Development Barisan Pemud
12 comments
Read more 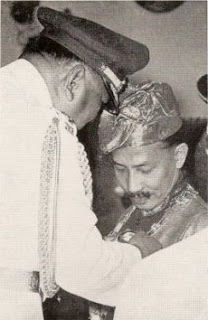 I found this interesting historical article recently. In the March 1960 edition of the 'Malaya - The Journal of the British Association of Malaya' there was a special article about the Sultan of Johore awarding to our Brunei Sultan Omar Ali Saifuddien III on the occasion of Sultan Johore's investiture as the 12th Sultan of Johore. The news read: +++++ On the 10th February 1960, in the historic throne room of the Istana Besar, Johore Bahru, His Highness Colonel Sir Ismail ibni Al-Marhum Sultan Ibrahim was crowned Sultan and Soverign Ruler of the Territory of Johore and all its dependencies. His Highness Sultan Sir Ismail, 65, thus became the twelfth member of the Johore Royal Family to rule over the State since the demise of His Late Highness Sultan Aladdin Riayat Shah II, who founded Johore at Kota Tinggi in 1540. Her Highness Ungku Tun Aminah binti Ungku Ahmad, Consort of His Highness the Sultan, was crowned Sultanah of Johore. About 420 diplomatic represent
Post a Comment
Read more 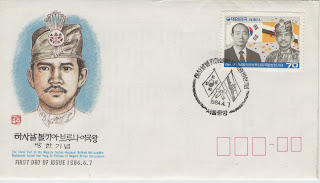 I recently acquired two first day covers. Both from the 1980s showing Brunei. Both are issued overseas. The first is: This is issued by the Korean postal authorities on the occasion of His Majesty's first official visit to Korea in April 1984, a few months after Brunei gained independence. It is interesting that the Koreans put up a drawn portrait of His Majesty on the cover of the first day cover. The stamp has His Majesty and the then President of Korea, Chun Doo Hwan. President Chun was President of South Korea from 1980 to 1988. He was sentenced to death in 1996 for his heavy-handed response to the Gwangju Democratization Movement, but later pardoned by President Kim Young-sam with the advice of then President-elect Kim Dae-jung, whom Chun himself had sentenced to death some 20 years earlier. The other one is this first day cover issued by United Nations in September 1989. I know this belong to a series of other first day cover but I don't have enough detail to te
1 comment
Read more 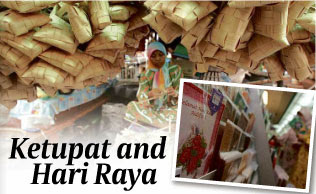 [I normally write an article during the fasting month about Hari Raya in the past but I have done a few times and decided to write about the ketupat. I was intrigued as my mother told me that when she first arrived in Brunei, there was no ketupat for Hari Raya. But nowadays ketupat is the symbol for Hari Raya. This article was published in my column The Golden Legacy in Brunei Times on 22 August 2011] +++++ WITH less than two weeks of the fasting month left, attention has now shifted towards the preparation of Hari Raya Aidil Fitri as Bruneians and other Malays around the region called it. Today, the symbol for Hari Raya is the outline of the ketupat or boiled compressed rice wrapped in a pouch of palm leaves. Everywhere you go, you will see the ketupat hanging everywhere. Nowadays, the ketupat does not have to be filled with anything. They are no longer made out of palm leaves but out of colourful ribbons. To the younger Brunei crowd, ketupat has always been there. They
1 comment
Read more 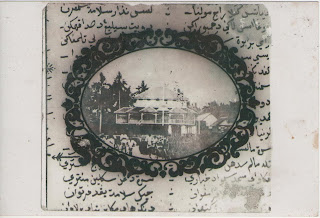 Last Friday, I was going around the tamu looking for ketupat casings and also asking the few sellers that about ketupat. That was for my Golden Legacy article on the origins of the ketupat which was published yesterday on Brunei Times. Today I am not going to talk about ketupat. While I was walking around the tamu, I came across an old man selling a lot of old stuffs including some books, old photographs, old coins, old paper money etc. I stopped to have a look and ended up buying a couple of stuffs. One of them is this photograph. Regular readers would recognise this as I have posted this Istana in the past. However I was intrigued this time round as the photograph came from some publication. So I thought $3 was worth to have this photograph. For those who do not know, this is Istana Majalis. Istana Majalis was used by Sultan Jamalul Alam, the father of Sultan Ahmad Tajuddin and Sultan Omar Ali Saifuddien. If I am not mistaken, both of them were born in this palace. The histo
Post a Comment
Read more 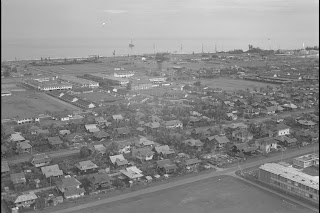 In the late 1950s and early 1960s, the shop houses in Seria were just completed. The town looks fresh and really resemble a simcity town with roads and houses nicely packaged together. This is what it looked like then. Is that AAC in the foreground in the righthand corner? Out in the sea you can see the first offshore installation. If you look closely, you can see that it is still connected to dry land via a cable car link. That was probably the first and only cable car link in Brunei.
Post a Comment
Read more 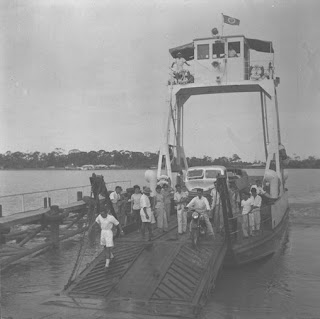 Back in the days before the bridge was built across the Baram River, this would have been one of the earlier ferries being used in the 1950s. Sometime we forget how transportation ministries on both sides of Brunei and Malaysia have helped to make travel convenient for all. We have the bridges at the Baram River, at the Belait River and also at Lawas. The final bridge would be at Pendaruan linking Limbang and Temburong. One should take photos of the ferries before they became distant memories as the bridge would be built shortly. Remember this news reported in all the local and Malaysian newspapers in April 2011: +++++ Malaysia and Brunei have agreed in principle to build a bridge connecting Sarawak's Limbang and Temburong across the Pandaruan river in Brunei, a plan that would bring major advantage to commuters from both sides. Malaysian Works Minister Shaziman Mansor told the press after taking a tour at the Pandaruan pier on Monday, that both Malaysia and Brunei go
1 comment
Read more 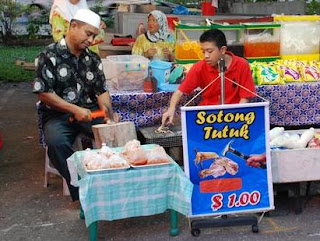 Yesterday, one of my colleagues started talking about food and the subject of Brunei's food cropped up. He was talking about the recent gerai during His Majesty's Birthday and whether that particular food is still available at the many gerai remadan's currently operating almost everywhere in the country. Pronounced by many as sutung tutuk roughly translated as hammered squids is certainly an old favourite. Not many realised that other than at the beaches, sutung tutuk is only available during the July birthday celebrations. The dried squid, heated over a barbecue, will be literally hammered by the vendor. Someone asked why must it be hammered. The only answer to that is that the red gravy sambal would not be able to penetrate into the dry squid if it has not been hammered or pummeled into smaller portions. And I doubt if anyone has a strong enough set of teeth to bite through dried squid if it has not been softened and loosened by the hammering. The squids all taste alike
1 comment
Read more

August 05, 2011
[On 4 August 2011, the Oxford Business Group reported the following news item.] +++++ Brunei Darussalam: Refined investment The downstream energy sector in Brunei Darussalam is set to get the biggest makeover in its history, with a Chinese consortium planning to invest up to $6bn to develop an oil refinery and associated chemicals plant at the Pulau Muara Besar (PMB) industrial site. On July 3 the Brunei Economic Development Board (BEDB) – the state agency tasked with advancing the growth and diversification of the national economy – announced an agreement had been reached between the government and Chinese textiles and raw materials supplier Zhejiang Hengyi Group to build a $2.5bn refinery at PMB, which the board has been promoting as the Sultanate’s main petrochemicals centre. Under the deal Sinopec Engineering, the engineering arm of China’s state-owned petroleum firm Sinopec, will carry out the front-end engineering design for the project, followed by the preparation of a deta
7 comments
Read more
More posts