Showing posts from January, 2014
Show all

January 30, 2014
The Brunei Times on 30 January 2014 had this report about Brunei: ++++ by Fitri Shahminan BANDAR SERI BEGAWAN Thursday, January 30, 2014 - BRUNEI’S economic output tumbled 9.7 per cent in the third quarter of 2013 due to a significant decline in the performance of both the oil and gas sector, and industry. During the quarter, the country’s gross domestic product (GDP) was estimated at $4.66 billion at current prices, data from the Department of Economic Planning and Development (JPKE) show. This was a decline of almost two digits from the $5.16 billion recorded in the same period of 2012. The department in its press statment did not say what sector caused the economic decline in the third quarter of last year. However, statistics released by the JPKE show that the oil and gas sector’s economic performance in the quarter decreased 11.7 per cent year on year. The industrial sector, weighed down heavily by a 17.2 per cent slump in mining, posted a year-on-year decrease of 9.7 per cent.
Post a Comment
Read more 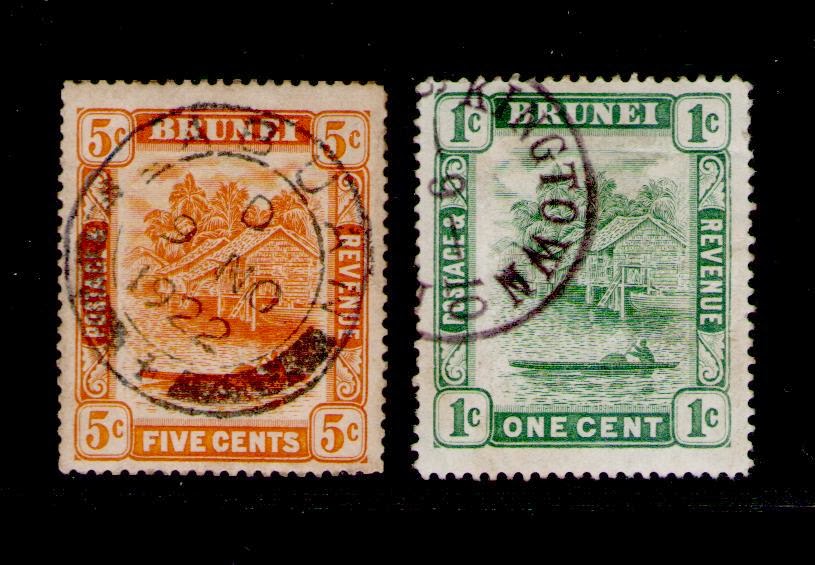 If you just take a glance at these stamps from my collection, you would not have noticed anything different. Just ordinary used Brunei stamps. They are old though. The 1 cent was issued in 1908 and the 5 cent was issued in 1916. Look closely. Look at the postmarks. Now you can see. The 5 cent stamp was postmarked Labuan on 9 November 1922. The 1 cent was postmarked Kingstown on 6 September 1910. You all know where Labuan is. Kingstown? That's somewhere in the West Indies. Theory? Probably the stamps when affixed to the envelope escaped from being postmarked in Brunei but when it landed in Labuan, the postmaster there affixed the cancellation so that the stamp can not be used. Similarly with the Kingstown postmark. The other interesting bit was that someone in Brunei wrote a letter to someone in Kingstown. If the stamp can talk, what interesting tales can it have.
2 comments
Read more

Past Maulid ur Rasul Processions in Brunei 1950s and 1960s 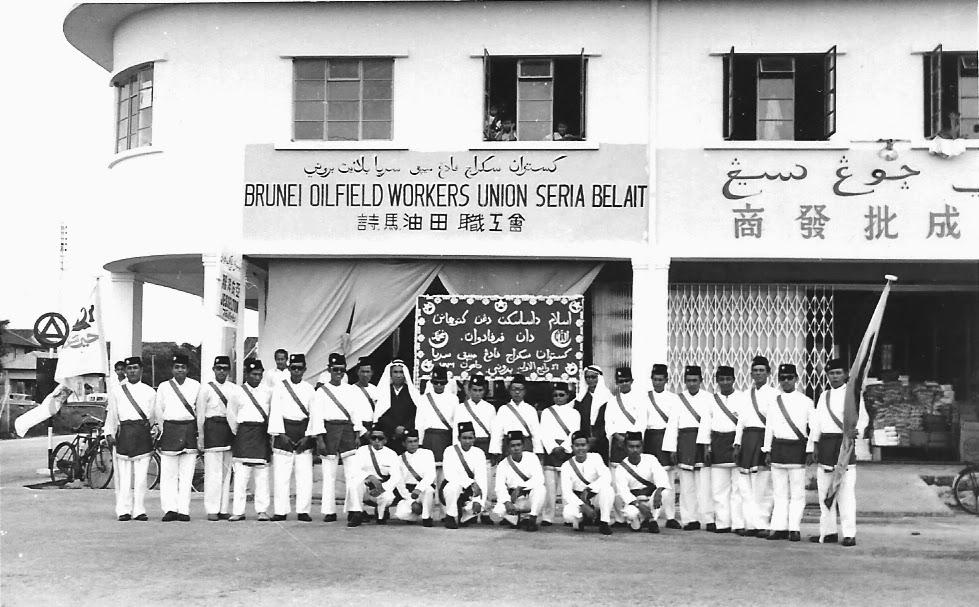 Some of my photograph collections of Maulidur Rasul processions in the 1950s and 1960s in Bandar Seri Begawan and Seria.
Post a Comment
Read more 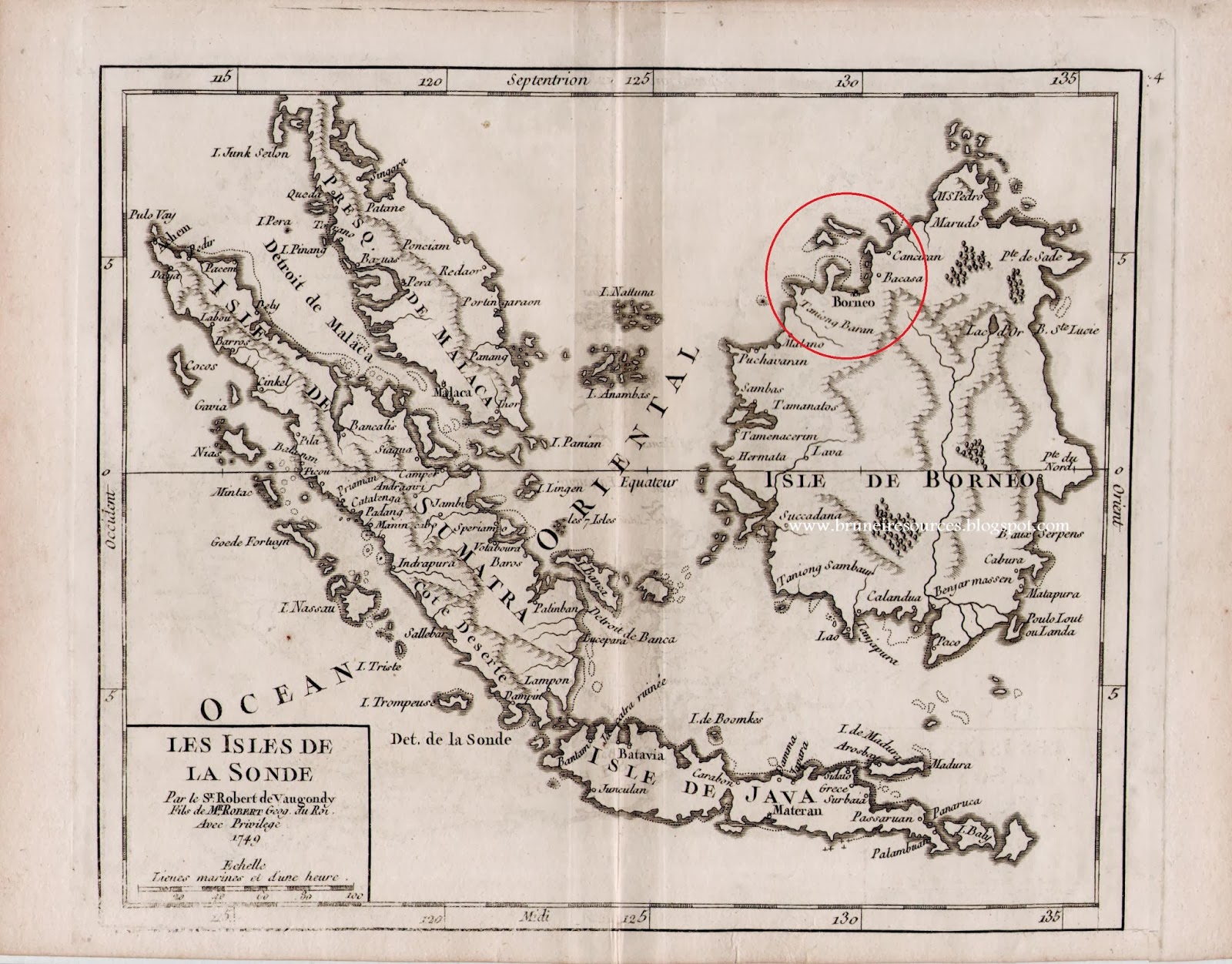 This 1749 map shows Brunei (circled red) as Borneo to differentiate it from the Island of Borneo (Isle de Borneo). Brunei was generally known as Proper Borneo in many maps around those periods. The more the mappers know of a place, the more detailed the maps are for that particular place. Hence Borneo is properly shown together with Labuan Island just off the coast of Brunei. Tanjung Baram was known but someone would have to tell me what happened to Bacasa or Canciran both very near Brunei in this map.
Post a Comment
Read more 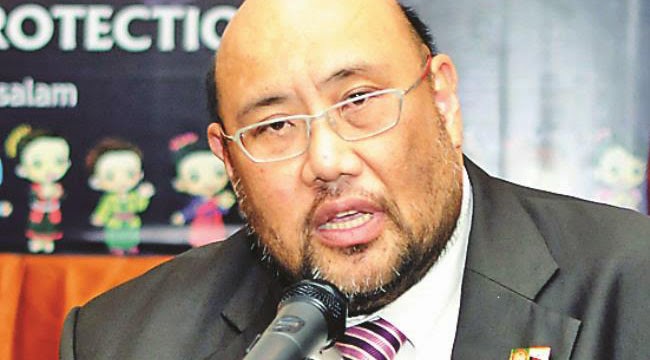 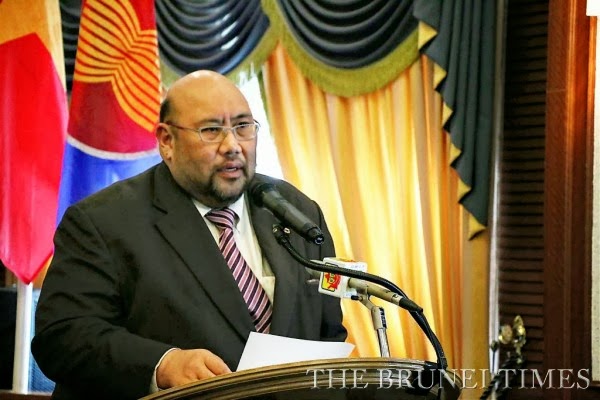 Story by Rabiatul Kamit BANDAR SERI BEGAWAN Tuesday, January 7, 2014 PARENTS were urged to take formal procedures in adopting children to deter mistreatment and neglect, following the recent death of a three-year-old toddler at the hands of her adoptive parents. Children adopted without the involvement of relevant authorities are more vulnerable to mistreatment and neglect, as such cases remain unreported, said Hj Mohd Rozan Dato Paduka Hj Mohd Yunos, Permanent Secretary at the Ministry of Culture, Youth and Sports (MCYS). Hj Mohd Rozan drew attention to a high-profile court case involving a married couple, Muhd Firdaus Hj Hamid and Masnani Hj Masri, found guilty of fatally abusing their young adopted daughter within a few days of her informal adoption last September. “The difficulty is that sometimes nobody knows about the abuse until it’s too late,” said the permanent secretary. He added that measures in formal adoption procedures were in place to detect child mistreat
Post a Comment
Read more 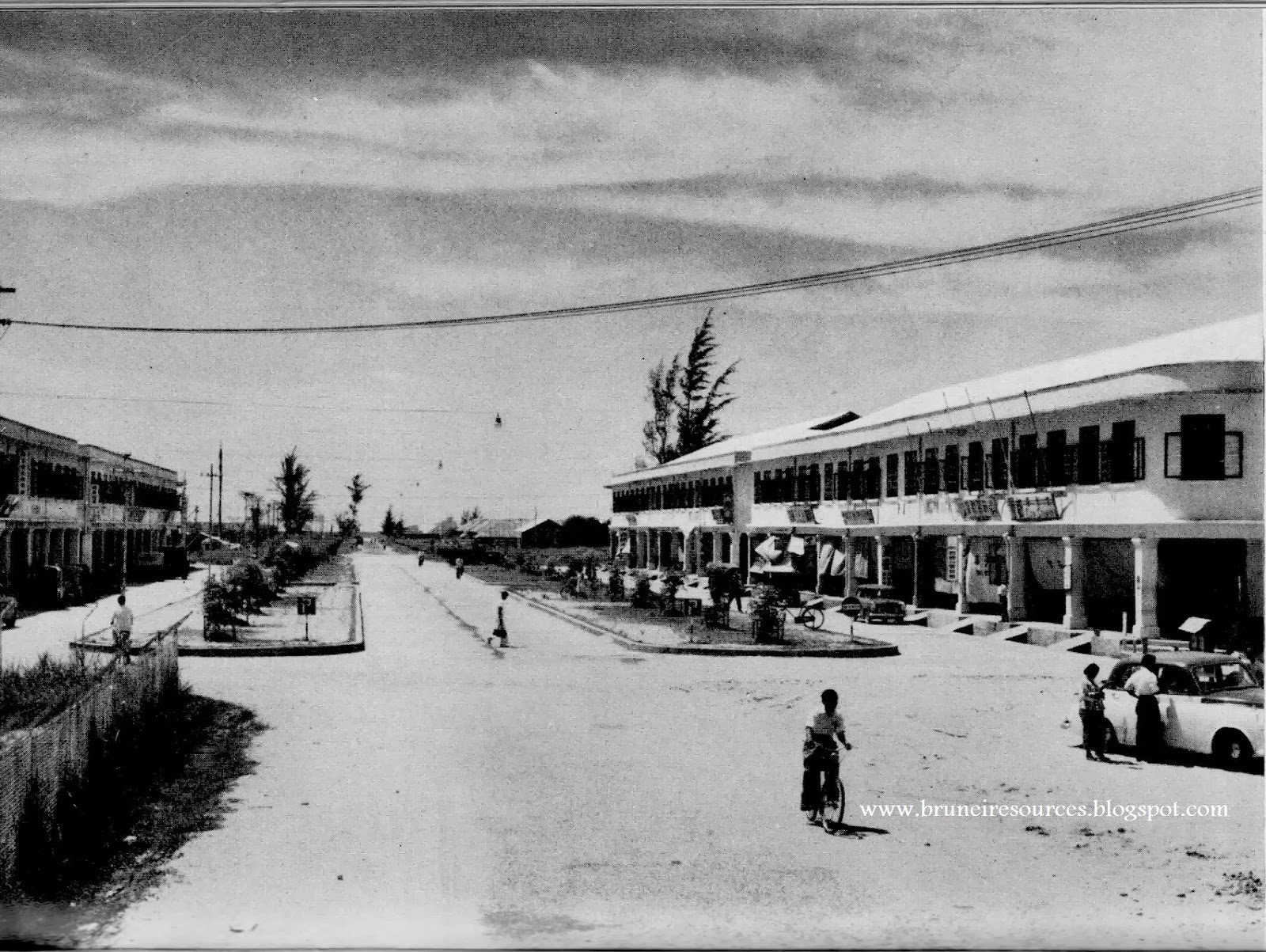 This photo is from the Brunei Annual Report 1954 showing Seria Town. Some of the shops remained till today.
Post a Comment
Read more 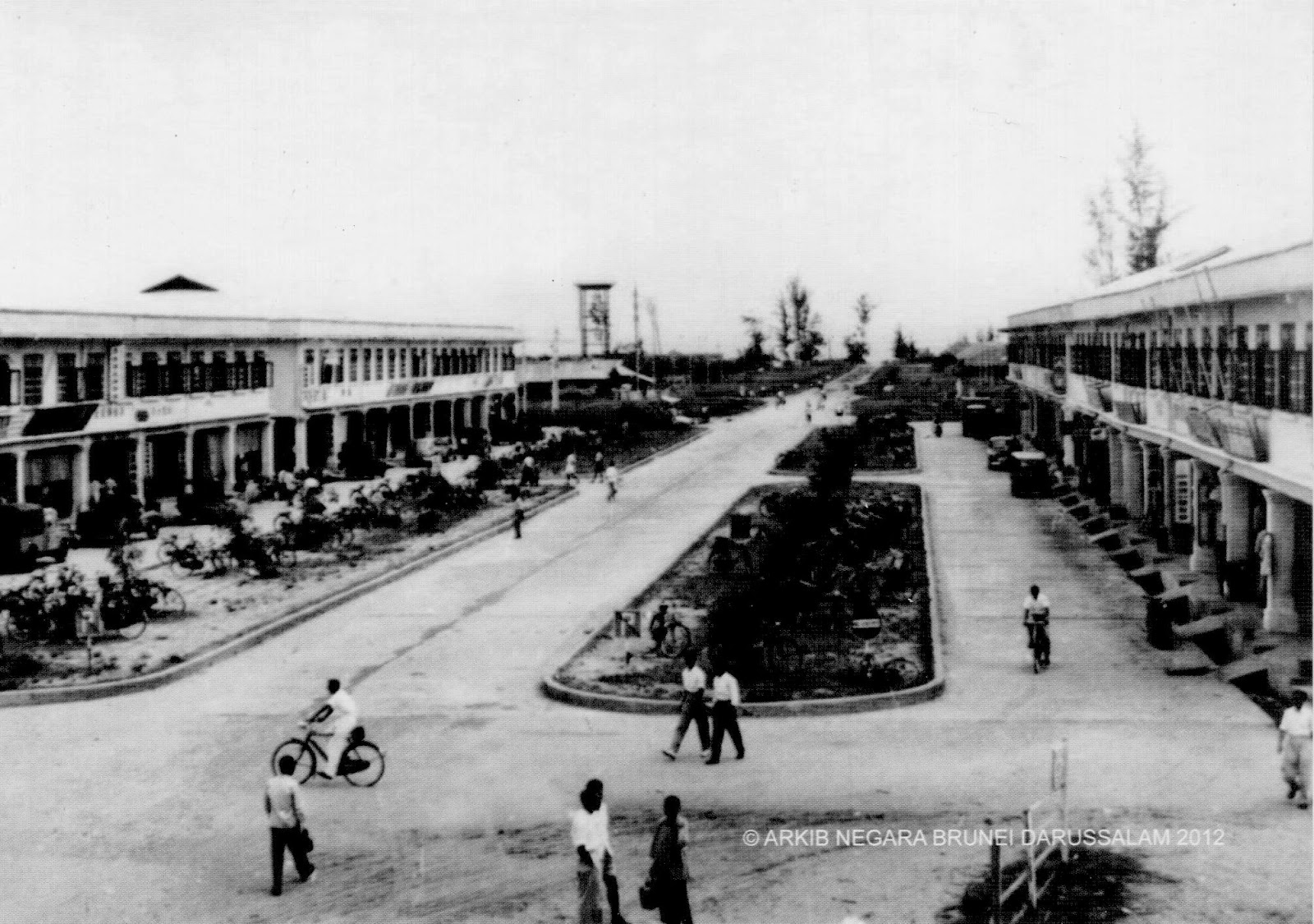 Scenic Aerial Photo of Bandar Seri Begawan in the 1970s 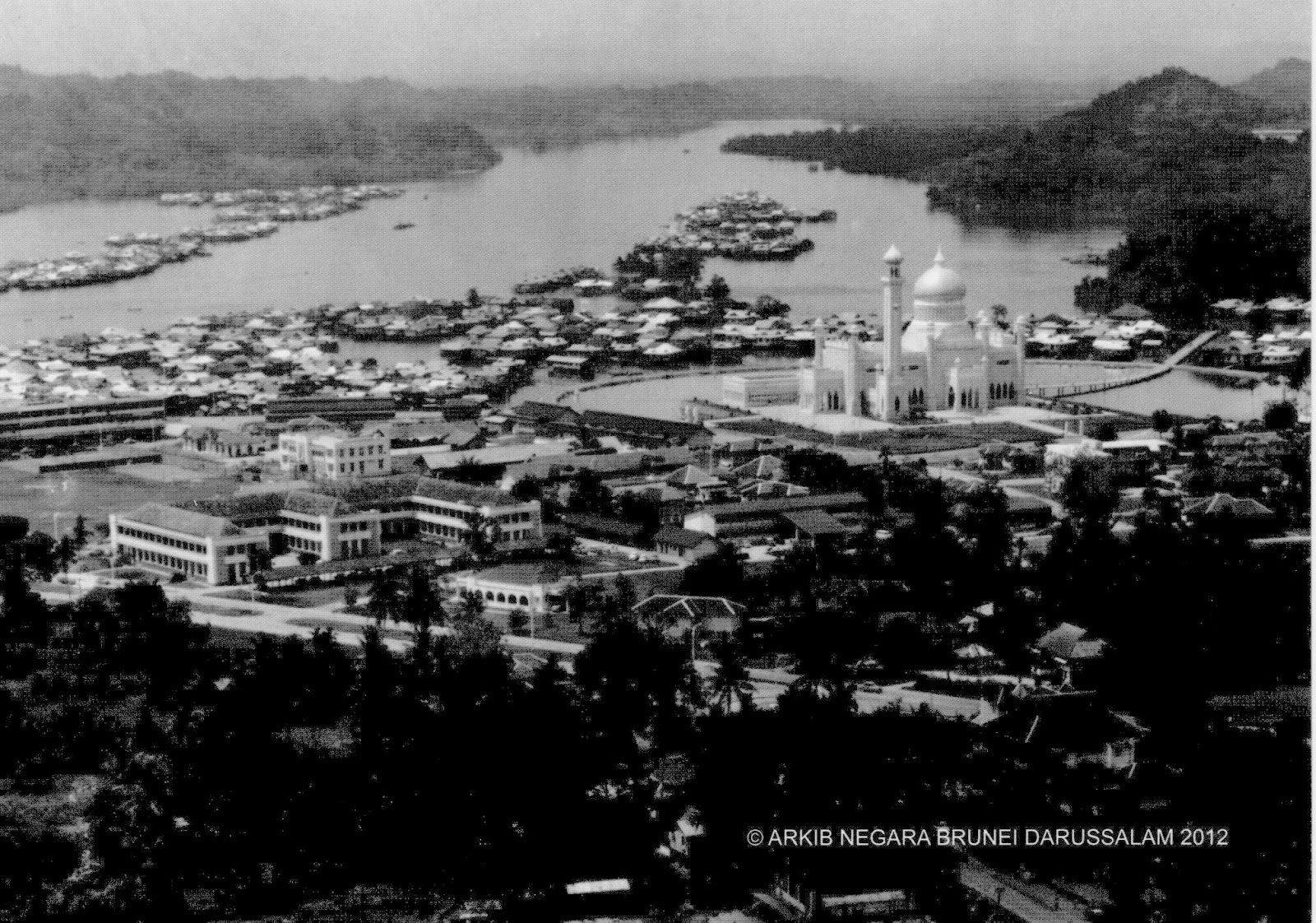 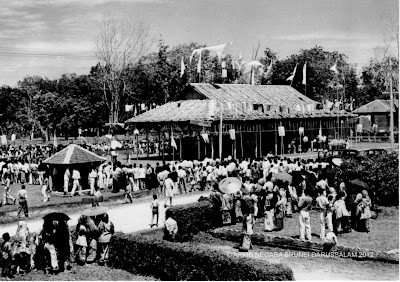 The Kajang-roofed Lapau building that was used on the occasion of the Silver Jubilee of Sultan Ahmad Tajuddin on 22 September 1949 (Photo: Postcard from National Archives Centre)
Post a Comment
Read more 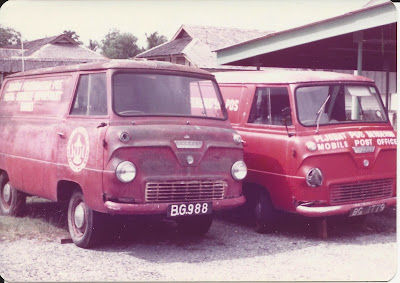 I am sometimes surprised to see old photos and what it shows. This one is taken from 1975 when the Brunei Postal Services Department was operating a Mobile Post Office. Does anybody remember?
Post a Comment
Read more 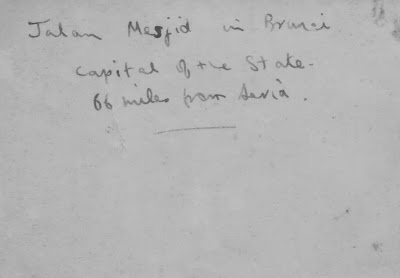 I bought the following photograph quite a while ago. What attracted me was that these four people took a photo in front of a road Jalan Masjid. This road does not exist anymore but if memory serves me correctly and my theory is correct, this road should be the current Jalan Elizabeth II in front of the General Post Office. The mosque known as Masjid Kajang was built somewhere at the carpark area of today's TAIB Headquarters in Bandar Seri Begawan.
Post a Comment
Read more 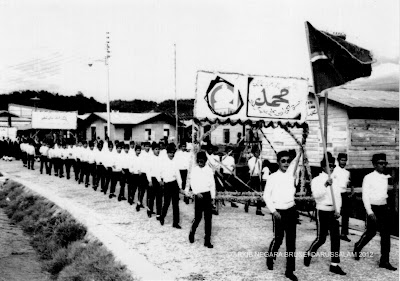 One of the troupes that followed the procession in conjunction with the observance of the Prophet's birthday around the 1960s. (Photo: Postcard from National Archives Centre)
Post a Comment
Read more 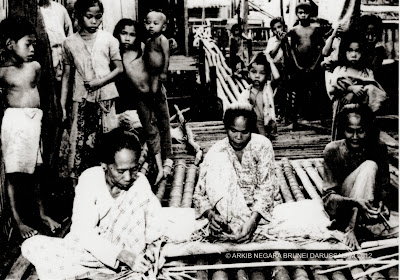 The hearth mat braiding artwork made from pandan or screw pine leaves became a part of the women's activity around Kampong Ayer in the 1940s. (Photo: Postcard from National Archives Centre)
Post a Comment
Read more
More posts