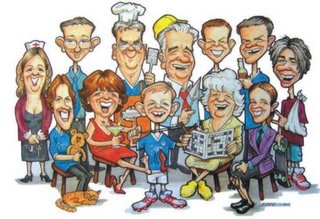 On my recent blog on Brunei's Time Line, one commentator got carried away and she started to talk about events in the past before moving on to nicknames. I enjoyed what she wrote and I offered for her to write a whole blog about it and I will put it up. But up to now, I have not received anything from her. So, Hajah Yati, if you are reading, my offer still stands. And for the rest of you readers out there, if you don't have your own blogsite, I am most ready to offer my site for the occassional blogs that you want to write - just make sure the blogs are Brunei related. You can set up your own blogsite once you feel comfortable. As someone later on commented, it will be nice to read someone else's blogs too on this website. At least on this one, you get an instant 300+ readers a day. So, please, my e-mail is admin@bruneiresources.com. Do write.

I don't have much on nicknames to write on as suggested by Hajah Yati. I remembered when I was at school (primary), I have friends called Tulang (bones), Muam and some other wierd names. They have perfectly beautiful real names but for some reasons which I can't fathom, they go by these nicknames. As I grow older one nickname which keeps cropping up is Fusoy which is Yusof spelled backwards. Why? I have no idea.

According to the Kamus Bahasa Brunei and verified by Kamus Nusantara, the titles that you (if you are a Brunei Malay) should called your uncles and aunties should be in the following order from the oldest to the youngest:-

Most families would get the oldest and the youngest correct. Most others would get some of the 'in betweens' mixed up. Some would make them up as they go along. Some would run out of titles simply because there are too many uncles and aunties. The official numbers here only go up to 7 but I know of a few families whose siblings number exceeded 16. Some families would repeat them, so the male uncle may be called tangah laki and a later female auntie called tangah bini. The only problem is when they get married - the wife of tangah laki should be called tangah bini and vice versa but the title is already used. In my wife's family, the Uda got split into Uda Hitam and Uda Puteh. So there are myriads of usage. To say whether the above order is correct is indeed debatable. But that's the official usage by the dictionary and I guess that makes them as official as can be.

The Malaysian Malays are slightly different using Long for the eldest instead of Tua, Ngah for Tangah, and I have never heard them use iring or amit. They also used the prefix Pak or Mak. So you would get Pak Long and Mak Long as opposed to the Brunei usage which would be Tua Laki and Tua Bini. My dad and mum got called Pak Teh and Mak Teh - I had trouble working out what number that title is - until mum told me that actually it refered to to their skin colour which is fair or white and hence the title 'puteh'. So they decided to use that.

I would really love to hear from you guys out there as to what titles you use for your uncles and aunties.

Anonymous said…
In my family, we do use the Brunei Malay titles, but with slightly different version, like Uwa(Tua), Umit(amit), Munchu(usu).But I have to say these titles are not enough to name everyone, so for aunts on father's side(tutongians)we use their names with title 'Babu' in the beginning, the uncles are called 'Angah' and their names.
Btw,my maternal grandmother was from Labuan and her husband from Kuching, and we used to call them Andung Laki and Andung Bini.
Another thing I noticed is that we described family members by the places they reside in or 'specialty' they have. For example, Nenek Batu Bersurat(a granduncle living in Batu Bersurat) or Nenek Gandang(becos he loves to play gandang). Of course we don't address them as such to their faces cos we do know their real names, but those nicknames simplify explanation.Plus it's always put a smile on their faces to hear those unique 'grand' titles.
Friday, June 30, 2006 9:29:00 AM

BRUNEI resources said…
same here, my son calls his grandparents (my side) as atuk and nini lambak and grandma (my wife's side) nini kapok. some of the aunts called themselves by derivates of their name, one called herself as Mak Ji. i called some of my aunts by their names too - mak iti (short for siti) and mak wa (short for hawa).
Friday, June 30, 2006 2:26:00 PM

p o t a t o said…
i have 21 aunts and uncles from both sides of the family.

On Father's side, I have 4 aunts and 5 uncles. Mostly usual names like Tua, Asai, Ngangah/Tangah, Uda, Uncu. But the ones in the middle are nicknamed Matboy (from Muhammad @ Boy), Umai (from Umar) and Akai (from Bakar).

Anonymous said…
It's funny when you read about naming relatives or nicknames, just seems like we 'baby talk'.

It is very interesting to see how different family have their own tua, uda, iring, usu/ucu etc.. I used to call my acai just acai.. but when the grandchildren came, it became acai girl and acai boy.. so we followed too. Westernisation has taken its toll! haha
What does acai mean? at least iring comes from 'Siring' (Side) and Amit from Damit(small). Acai??? I can't find the connection.

'Boy' is also a very popular nickname for boys. When you actually find out their real name it could be Mohammad something?? Sometimes I wonder how that nickname even come about...

'Alai' is the ebiquitous nickname for girls. Where does 'alai' originate and what does it really mean?

'Didi' is a popular tutong nickname for girls or wives?? I'm not sure. Why?

Calling people 'C' in front of names is inevitable. Where does 'C- something' originate from? Philippinos also use 'C' when referring to people. I often hear them say 'C-Datin' this and that.

Oh talk about philippine language and the brunei malay languange.. some words have similar meaning, even im surprised. I guess this would be another topic to talk about.

We call our father's youngest brother "Bapa damit" as opposed to the usual "Bungsu". I thought that was apt because he is a small man!

We just call our uncles and aunts in between my dad and his youngest brother as "tangah" because we couldn't were used to call them that.

Anonymous said…
well i have twins for bungsos from my dad's side and they're identical twins.. so i guessed it was hard to differentiate them so the older cousins nicknamed the two bungsos - bungso *inside name* and bungso *inside name* :)
I called my late grandmother Babu, pasal I was always at their house and all uncles and aunties, so did the older cousins called her Babu. Masa damit, we used to called Nini Kota Batu and grand dad, Nini Laki. Locations of family members plays a part in giving nicknames, as aunties and uncles are named after the place they reside in, Tua Lambak, Tua Sengkurong etc.
My cousins from KB calls their grandparents, Nini Boy and Nini Girl. Hehe.
We have no uchu, anjang, iring or uda. Just tua for the eldest, bongsu for the youngest and tengah for the in-betweens.
Friday, June 30, 2006 9:38:00 PM

Anonymous said…
Just to comment on about where the word 'Acai' came from. In my opinion the 'Acai' was meant for 'Basai'(brunei word for 'Besar'). In my family the word 'Basai' is meant for the aunties or uncles after the eldest Tua. So the chronological title is like this :
Tua / Basai / Babu(for aunties) or Angah (for uncles) / Uda / Amit / Uncu