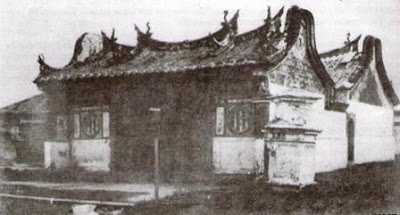 The Chinese Temple at Jalan Kianggeh attracted a lot of Brunei photobloggers during its annual Chinese New Year celebrations. It has been there for so long that not many remembered that there is an older one in the city centre.

I remembered looking at an old photograph of the wharf and seeing an old temple there. When I asked around, most elderly Kampong Ayer folks remember that until about 1960, there was a Chinese temple was there. It was demolished around then and not just the temple, a few of the government buildings around the area were also demolished to make way for the expanding port. The Brunei Port was the one in the city centre until Muara Port was operational in about 1972.

bunbungirl said…
Hi. Your blog, I found an article about Japan
Do you like Japanese foods and fashion?
If you are interested in Japan, there is a link to my site please.
Japanese culture (for example, Japanese healty food, animation, games) here.
http://japanesefood-cultuer-history-anime.blogspot.com/
Thursday, April 10, 2008 9:25:00 AM

Anonymous said…
thanks very much for your article. That's a real meaningful piece of history for my parents as my grandparents came from the place you mentioned in China/Taiwan. Hope you don't mind if I link up your blog with mine. Cheers
Friday, April 11, 2008 5:51:00 PM

View from NY said…
Let me share 2 anecdotes about that temple.
After the temple was built, a plaque was put up with the list of people who donated towards the construction. The plaque was made of wood, roughly 3 foot high and 8 foot wide and inscribed with the names of donors and the amount of their largesse in Chinese and cut into the wood with a blade. Years later, apparently there was a bitter dispute and someone took a saw an cut away a chunk of the plaque. The plaque is now tucked away in a quiet corner of the current temple.
The second story is that the temple was the only large building standing after the bombardments of Brunei Town in World War 2, first by the Japanese and Allies. My uncle remembers after the second bombing people were amused to find an unexploded bomb in the temple courtyard.
Monday, June 30, 2008 11:21:00 AM

kiwibloke said…
I am Dato Cheok Boon Siok's great grand son now residing overseas. Am very grateful for your posting of this article acknowledging the contribution that my great grand dad had made for the chinese community.
Friday, December 26, 2008 4:43:00 AM