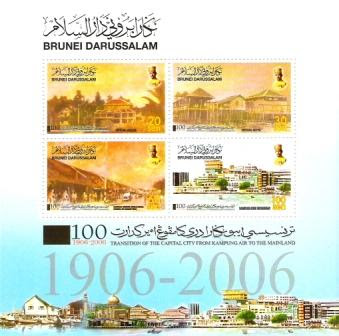 This post is slightly late (5 days) but so is the commemorative issue (2 years late). On Thursday, 24th April 2008, the Post Office issued the first of this year's commemorative stamps. This issue is to celebrate 100 years of moving Brunei's capital to dryland. Prior to 1906, Brunei's capital or administrative centre was always on the water. Though reading some of the older books, it may have been that the palace was not always on water, but tre rest of the administrative capital was always on the water.

Prior to that Bandar Seri Begawan or Pekan Brunei as it was then known was a city on water. Peter Blundell in his book ‘City of Many Waters’ published stated that the “town was unique, the only one in the world built almost entirely over the water, and the Bruneis were justly proud of it. They were folks who live a semi aquatic life, and their methods of living, household arrangements, family life, and town government, adapted as they had been to life over the water.”

When did the capital move to dry land? The official record was that of the first British Resident, McArthur, who wrote in his report the following words “I want a clean, dry village with suburbs of kampong houses. I also want to discourage building on the water village.”

A group of Chinese businessmen moved out from Kampung Pekan Lama (then known as Kampung Bakut China) which served as the business area in Kampong Ayer, and started to build their shops on dry land. In 1910, there were six shops, the year after, in 1911, there were 26 shops and just before the Second World War in 1941, that number has increased to more than 80 shops. The shops are built along the current Jalan Sultan.

As for the population, it was not only in Kianggeh and Sumbiling, but they have also moved to Sultan Lama, Barangan, Sungai Kedayan, Tasik, Tungkadeh and Pusar Ulak. Although there were a number of houses now built on those areas, there were still many more left on Kampong Ayer.

The Post Office was quite innovative this year compared with other previous issues. You can buy the First Day cover with stamps, the miniature sheet of the four stamps, a sheet of 20 stamps for each stamp in a mounted frame and also a booklet of stamps. The stamps commemorated the beginning of modern Brunei and I think it is worthwhile to keep them. The stamps are available at the Philatelic Unit at the General Post Office, go there, get the stamps and visit the stamps gallery at the same time. You can see the earliest stamps of Brunei including that of the 1895 stamps.