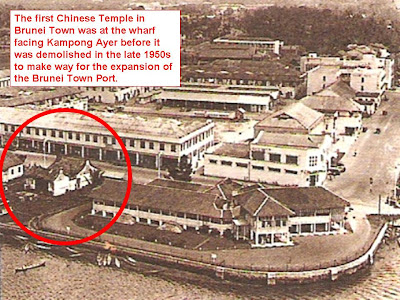 I was trawling through my photographs collection in my hard disk when I came across this photograph. This photograph was taken in the 1950s showing the two buildings on the wharf facing Kampong Ayer. The one with the red circle was the first Chinese temple, which I wrote about a few days ago. The building next to it was the Government Rest House. The temple was demolished and rebuilt a few blocks away facing Sungai Kianggeh. The Rest House lasted until the 1970s. It became for a time the office for the Information Department, and later for Pelita Brunei if I am not mistaken and then was demolished. Now the sites are vacant lots and used as a carpark.

In the centre of the photograph is an empty piece of land. That was the old bus station and of course nowadays there is a multistorey carpark with the bus station there.

Al-Qadr said…
I believe the block of shophouses fronting the old "Tapikong China" has now changed drastically where a six-storey building (half-occupied by Maybank) was built by the owners, Abdul Razak Properties, some years ago. Wonder who was the first owner of that property?

In contrast, the corner building (presently occupied by Jasra Harrisons) has not changed much since the 1950s save for additional floors added on to it.
Friday, April 18, 2008 8:43:00 AM