It would be quite impossible to find anybody in Brunei who don't know where Istana Nurul Iman is. The degree of knowledge obviously tapers off as you go down the list of Istanas or palaces in Brunei. Istana Nurul Izzah in Jerudong, Istana Darul Hana in Jalan Tutong, the guest palace Istana Edinburgh in Jalan Menteri Besar, Istana Darussalam in Kampung Sumbiling, Istana Manggalela in Belait and Istana Pantai in Tutong. I have written about the latter two. 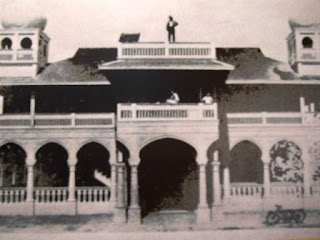 During the 100th year anniversary exhibition of Brunei's capital moving to dryland (still on at the Commercial Centre in Bandar Seri Begawan), there was a number of old photographs on other recent past Brunei's palaces. There were three in particular - Istana Mahkota, Istana Majalis and Istana Kaca. I was lucky that during the ceremony, there were enough people who happened to have gone through those eras and managed to see the buildings themselves. 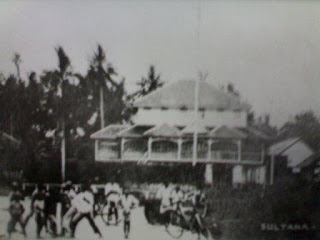 Another major Istana being used by the royals was Istana Majalis. This was used in the 1920s and 1930s. I am not sure when it was demolished but many records indicated that a number of princes and princesses of Sultan Muhammad Jamalul Alam died there - so the palace was used quite extensively by the royal family then. Istana Majalis used to be located where the General Postal Office is currently in Bandar Seri Begawan.

Another two palaces - more like guest houses - are very near the Istana Majalis. I suspected that these two are annexes to Istana Majalis originally. Unfortunately only one of the two had surviving photographs which is Istana Kaca. Though by the 1960s, this Istana was so dilapidated that one of my senior PS colleagues during the exhibition was telling me how when he was a kid, he and his friends used to break the window panes there to make 'belahan' for the kite. 'Belahan' are powdered glasses that one rubs on the strings of kites so that the string can cut other kites' strings. 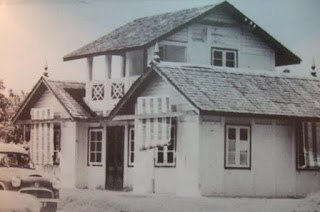 There were a number of other Istanas being used during the late 19th and early 20th century. So far I know the names of Istana Kampung Ayer, Istana Pekan, Istana Kota at Kampung Sultan Lama and lately I came across another Istana's name called Kafidunya. I have not seen any photograph and other than only one source citing them, I have not seen any additional sources. Future blog fodders should I be able to come across new materials regarding these.