Graveyard in the City Centre

April 06, 2008
Last year around this time, I was in Bandar trying to get a much better photograph of Raja Ayang's grave - you know the one in front of the General Post Office, next to TAIB's carpark. I was rewriting an earlier blog which I did in November entitled Grave in the Middle of the City which I rewrote as my second or third article to be published in my column Golden Legacy in Brunei Times. I rewrote the blog as a proper article entitled Mysterious Grave in the City Centre for my Brunei Times column.

I could not get a good shot as the whole grave was surrounded by blue canvas. I figured that the appropriate authorities must either be cleaning up or trying to make it less conspicuous. If you read my blog entry or article, the grave is not exactly something you find it easy to explain but it does make everything else around Bandar not as interesting. Like I said, among the words you have to explain would be incest, stoning, death sentence etc. 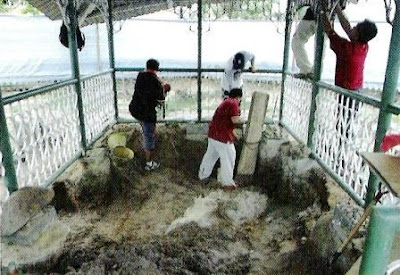 It was recently that during the LegCo that I heard the Minister of Culture explaining that part of the efforts that his Ministry is doing is improving the grave yard and its surrounding as well as doing a lot of research on the grave. I finally found a photo of the work in progress in Berita Muzium. So, expect something new to come out from the improvement work that they are doing soon.