April 15, 2008
Note: My article on the Royal Brunei Police Force was published on the Golden Legacy column, Brunei Times on 2nd March 2008. The accompanying photograph was that of my grandfather and his policemen friends. My grandfather retired in 1970s as a Sergeant Major. 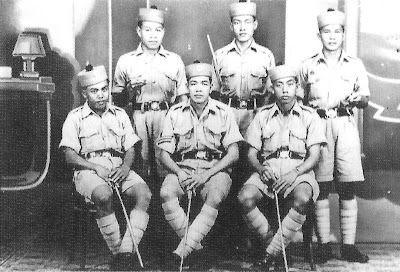 THE Royal Brunei Police Force counts among the oldest government agencies in this country. It certainly is the oldest paramilitary organisation in Brunei.

In 1904, a British officer, one MSH McArthur who eventually became the first British Resident was asked to look at Brunei and compile a report on the country for consideration of the British Government in London.

Part of his report was a very short statement on who did the policing in Brunei. He stated that "with no public expenditure ... there are no salaried officers ... no forces, no police, ... and most crying of all no gaol!"

The first group was made up of one Pathan and one Sikh before a detachment of Sikhs was seconded from the Straits Settlement government in Labuan. Surprisingly in 1916, it was one of these Sikhs who murdered the Resident, EB Maundrell. In fact, according to AVM Horton in his paper "The British Residency in Brunei 1906-1959" there was scarcely any crime in Brunei and the burden of court work was negligible.

These seconded officers from Labuan were eventually replaced by local Malays. The Brunei Police force was officially formed on January 1, 1921 immediately after the 1920 Police Enactment was passed. The local force took over all responsibilities from the Police Force of the Straits Settlement.

Even though there was hardly any crime in Brunei, maintaining an enforcement agency and jail took up a high proportion of the government's revenues which in the days prior to the discovery of oil was not much.

As such, since its formation, the Police Force has been tasked with a wide range of duties and responsibilities including those of executive roles. Their secondary functions include being a "fire brigade" and registrar of almost everything that required licensing in Brunei such as aliens, firearms, dogs, bicycles and motor vehicles.

In the 1930s, the police also manned the Brunei telephone exchange. It was not until the 1960s and 1970s that a number of these function were surrendered to the various agencies such as the formation of the Fire Services Department, Immigration Department (1958) and Land Transport Department (1960).

However, the Royal Brunei Police Force has always been a para-military organisation since its establishment to date. The continuation of such characteristics should be viewed from its early formation based on colonial policing introduced by the British.

In 1950 the Police Headquarters was moved to Kuala Belait and the CPO was answerable to the CP of Sarawak. It was in 1950 that the CID was established. The following year its own Training Centre was established in Seria. A Police Band led by RE House was also set up.

In 1959 with the introduction of Brunei's own Constitution, the Police had its own Commissioner of Police and no longer reports to the CP Sarawak. In 1960, with the establishment of the Reserve Unit, the Brunei Police Force no longer depended on the Sarawak Field Force Platoon.

Among the early successes in the history of the Royal Brunei Police Force was its success in defending the country from an armed rebellion led by the Tentera Nasional Kalimantan Utara and Partai Rakyat Brunei on 8th December, 1962.

The title "Royal" was bestowed upon the Force on 23rd September, 1965 by the late Sultan Haji Omar 'Ali Saifuddien Sa'adul Khairi Waddien. From then onwards the Brunei Police Force has been known as the Royal Brunei Police Force.

In 1971, the Royal Brunei Police Force celebrated its Golden Jubilee. On 14th August of that year it was once again honoured with the "Royal Standard" bestowed by His Majesty Paduka Seri Baginda Sultan Haji Hassanal Bolkiah Mu'izzaddin Waddaulah Ibni Al-Marhum Sultan Omar 'Ali Saifuddien Sa'adul Khairi Waddien when His Majesty himself consented to become the "Inspector General" of the Royal Brunei Police Force.

It was in 1975 too that the first local Brunei Malay officer was appointed as Commissioner of Police. He later became Yang Amat Mulia Pengiran Setia Raja Pengiran Haji Jaya.

Its professional competence and credibility are on par with other police forces in other countries after successfully participating in the United Nations mission in Cambodia (Untac) in 1992 and after having been an observer at South Africa (Comsa) in 1993.

In 1993 the Special Branch was disbanded and absorbed as the Internal Security Department.

With the advancing technology and globalisation posing a new challenge to the Force, it became imperative for the police to adopt and formulate plans to face these challenges. The changes were made in 1995 with the Royal Brunei Force reorganising its administrative structure by introducing five Directorates at Headquarters level and creating three more Police Districts to make a total of six Police Districts altogether.

Despite having a small population, Brunei Darussalam has a credible police force to be reckoned with. The roles and the credibility of the force have earned Brunei a high esteem in the region and internationally.

Anonymous said…
I was interested in reading your article here
My husbands great grandfather was chief police constable of Labuan in the 1880's to 1890's. His name was Isaac james or Henry James Holker.
D oyou know if anyone has any records on the police force in Labuan at this time?
Thank you
Charlotte Holker
Tuesday, July 27, 2010 10:04:00 PM