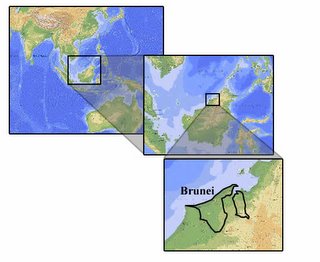 I did not realise that there would be a big debate on what an 'empire' is when I stated that Brunei lost its huge empire. Of course in comparison to the Roman Empire or any of the other 'Empire', the Brunei Empire was relatively small. But at its height, it is said to have covered the whole of Borneo Island and all the islands in the Southern Philippines and some have said the empire also included parts of the Indonesian Java Island as well. How the empire was ruled in those days would also be subject to question. At its height even the Roman Empire was not in total control of some of those areas supposedly within their empire. Short of being a time traveller, there is no way we would really know. However amazingly enough, most of the historical data that we used to derive all these information are not ours. It's always written by other people, other historians. And other people will not write your history well.

All the arguments heighten my interest to delve into further readings of Brunei History. I found an article written by one of our historians at the History Centre who wrote about the origin of the name of our country, Brunei. Most of us were brought up (those who were lucky enough to be brought up with Brunei History - I was using the Malaysian History Book when I was at school in Brunei) knew of the story of a group of 'sakai' led by Pateh Berbai to search for the new capital. When they found the present location to be very strategic, it was said that they said 'baru nah' - finally we found it. Eventually 'baru nah' became Brunei. I thought when I first read this years ago, it was plausible but there was a sense of doubt there. It does stretch your imagination how 'baru nah' can in the long run become 'Brunei'. What kind of conversation were they having in those days?

I quite like the second explanation from another school of thought - more scholarly - and hence less fun, which stated that the word Brunei comes from the Sanskrit word 'Bhurni Karpuradvipa' - 'bhurni' means 'land' dan 'karpuradvipa' which means 'camphor land' as in those days, Brunei produces a lot of camphor (kapur barus) said to be among the best in the world. Some have also speculated that another Sanskrit word 'Varunai' which means 'seaborn' as Bruneians in those days are said to be great and brave sailors. Again this relates well to Bruneians who lived in Kampung Ayer.

In the Chinese Annals from the years of 518 to 1370 CE, Brunei was known as either Poli, Polo or Poni. It changed to Brunei in about 1397 CE during the reign of Chien-Wen when Brunei sent its emissary to China. The Europeans called Brunei as Borneo as one historian writes '... the islands of Borneo which is given its European name to all the rest, is correctly pronounced by the inhabitants of the country itself 'Brunei'...' The Arabs know Brunei in those days as 'Dzabaj' or 'Randj' and surprisingly it is the present South China Sea which was then called the Brunei Sea. In fact there has been many spellings of Brunei in various historial literatures such as Buruneng, Bornei, Burneu, Borney, Borneo, Bruneo, Burne, Bornui and Burni.

The word 'Darussalam' was said to be used from the third Sultan, Sultan Sharif Ali. This was the days when Brunei was very famous and visitors from the Islamic Middle East would come to Brunei to trade and they found the country so prosperous and peaceful that they called it Darussalam which is the Arabic word for peace and prosperous.

Anonymous said…
You should check the new history book for secondary school. It will tell you where the origin of "Darussalam" is from.

By the way, it is also quite a contraversial issue about where Brunei's exact location is during ancient time.

Brunei now and BRunei identified as POLI, PUNI and others, if you have the time to check old history books - will show you that these places are actually located in the Sarawak, Kuching side.

Anonymous said…
by the way, dun believe too much on what BRunei History Centre is saying.... hehhe...

Anonymous said…
the beauty about history is that nobody knows who is right - the more theories the better - in the long run, we can think for ourselves - it does make an interesting reading to know our origins
Thursday, June 01, 2006 7:36:00 AM

Anonymous said…
I thought that Sarawak etc.. (ie the whole of Borneo) WAS part of Brunei (or Poli or Puni et al).

In fact a very knowledgable antiques dealer that I know (not Bruneian) said that foreigners used to refer to Brunei and Borneo interchangably in old maps, pictures or articles etc..

I'm not saying we should accept our history books without question (e.g. myths like Puteri Leila Menchanai etc) but when it's corroborated by other nations maybe it's okay to believe in it.. Plus it does make for great reading hehe..
Thursday, June 01, 2006 12:05:00 PM

Anonymous said…
Anthropologists like to say, cities do move from one place to another place - eg. Burma's recent capital shift. Hence, if this argument is accepted, then yes, Brunei and Poni which was technically located somewhere near Kucing, can be said to be old Brunei.

BUT... What if Sarawak then claim to have thousand years old history, and that in the past, it was known as Poni? Camana tah tu?

What annoys me the most is when people kept on saying Brunei was a part of Malaysia (Sabah & Sarawak)& that now because of the departure, Brunei is just small rich country.

I kept on arguing its the other way round.

Anonymous said…
I read an article about how does Po'ni or Po'li eventually become Brunei. Chinese traders came from different part of China and came to Brunei during different Era so, logically, they have different slang of talking. They would refer Po'ni or Po'li as (WenLai) and (Bhunlai) and eventually with diff slang, it become Brunei. And even now, when I went to China, they still refer Brunei as Wenlai.