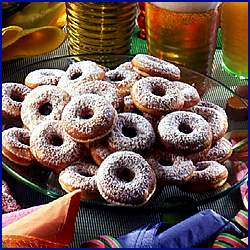 My 6-year old son loves Supasave donuts. Supasave supermarkets sell their donuts ball-style and not the traditional ring-donut style - you know, the ones with holes in the middle. For some reason, my son likes to eat his donuts whole rather than biting into a ring-type donut. As for me, I got bitten by the donut bugs when I was studying in the States. I have to go pass this Dunkin' Donut place everyday and every so often I would drop in there. At that time it has this offer of a free donut for every 5 that you buy or at some other time of the day, it would have this buy one get one free offer. The donuts are not just round but filled with many fillings such as custard, chocolate etc. Man, those were the days.

Incidentally, a plain donut contains around 300 calories. On average, it takes about a mile walk to burn off about 100 calories. So 300 calories is about a 3-mile walk and half a dozen of them donuts, are ...

Anonymous said…
Is there still a Dunkin' Donuts in Brunei? I thought they all closed down.

Anonymous said…
I remember there was a Dunkin' Donut at Yayasan. It closed down already. But much prefer to get down to Hua Ho and have their round mini donuts.
Friday, May 12, 2006 12:33:00 PM

Anonymous said…
dunkin donuts doesn't even compare to krispy kreme! i think krispy kreme uses crack cocaine in their icing. that's why i keep wanting to eat them everyday. hehehehe or some kind of drug anyway! because the staff are way too nice.
Friday, May 12, 2006 2:46:00 PM

Anonymous said…
I kinda like them both...DD if you are looking for something light and don't want a sugar rush (and eventually the headache)...and KK for the serious high.
Friday, May 12, 2006 4:44:00 PM

Anonymous said…
The 'Donuts' in Medina is a taste to remember. I dont remember the name of the shop but I think it was called Donuts Palace. The local donuts is also nice. Different from the western incarnation.
Saturday, May 13, 2006 8:51:00 AM

Anonymous said…
Low Fat Donuts discovered
Holey Donuts!(tm) Ultra Low Fat Gourmet Donuts
New York, NY -- September 26, 2006 – The low-fat donut has been the Holy Grail of the food industry. Food companies have been able to take most of the fat out of everything from cheese to Twinkies, but no one has succeeded in designing a marketable donut that dips below 4 grams of fat per serving before now.
Holey Donuts!™ announces a major innovation in the donut industry with the introduction of Ultra Low Fat Gourmet Donuts. Holey Donuts! has a unique patent pending process that avoids deep frying and produces a great tasting donut with only 3 to 4 grams of fat, unlike the 15 to 20 grams of fat in other donuts.
Holey Donuts! has created an extended line of ultra low fat gourmet donuts and cinnamon buns. These products are guaranteed to please the palate of even the most discerning donut lover while dramatically lowering fat content with zero trans-fats yet nothing about these donuts tastes low fat, its just amazing. Significantly, Holey Donuts! Ultra Low Fat Gourmet Donuts and Cinnamon Buns contain zero trans- fats,zero cholesterol and no artificial sweeteners or fat substitutes, and they just taste great.
The secret lies in a unique cooking process which avoids deep-frying. Deep frying produces a fat laden greasy donut and now Holey Donuts has changed everything. In addition to the dramatic reduction in fat content, these donuts have as much as 75% less calories than other donuts"
Over 18 varieties of donuts and mouth watering cinnamon buns are currently available for ordering on-line across the country at holeydonuts.net.
Holey Donuts! has gained tremendous popularity and much critical acclaim whenever tasted by consumers, "there is nothing ‘low fat’ about the taste of these donuts" says one taster. Holey Donuts! is such a smart concept now we can eat more donuts and not look like one!
Contact:
Phone: 212 252 3365
www.holeydonuts.net
Saturday, September 30, 2006 11:00:00 AM