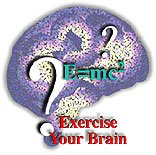 Below is a very private way to gauge your loss or non-loss of intelligence. So take the following test presented here and determine if you are losing it or are still a MENSA candidate. OK, relax, clear your mind and . . . begin.


Question 1. What do you put in a toaster?

The answer is bread. If you said "toast", then give up now and go do something else. Try not to hurt yourself. If you said, "bread", go to question 2.

Answer: Cows drink water. If you said "milk", please do not attempt the next question. Your brain is obviously overstressed and may even overheat. It may be that you need to contend yourself with reading something more appropriate such as "Children's World". If you said, "water" then proceed to question three.

Answer: Greenhouses are made from glass. If you said "green bricks", what the heck are you still doing here reading these questions? If you said "glass", then go on to question four.

Answer: You don't, of course, bury survivors. If you said ANYTHING else, you are a real dunce and you must NEVER try to rescue anyone from a plane crash. Your efforts would not be appreciated. If you said, "Don't bury the survivors" then proceed to the next question.

Answer: One degree. If you said "360 degrees" or anything other than "one degree", you are to be congratulated on getting this far, but you are obviously out of your league. Turn your pencil in and exit the room. Everyone else proceed to the final question.

Answer: Oh, for heaven sake! It was YOU, Read the first line!!!