The Mystery of the Brunei Missing River 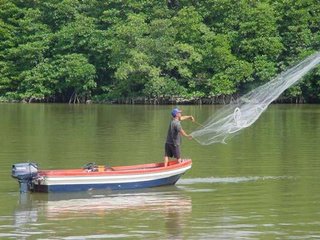 Ever since I read the "Wanderer in Brunei Darussalam" which I blogged sometime last month, I was piqued with curiousity with regard to one of the stories in the book - the Sungai Katam Project. I have been asking a few people what happened to Sungai Katam? The Sungai Katam Project in the book referred to the Apartment Block at Taman Puri - that's the huge residential park along Jalan Tutong just off the Jalan Tutong/Telanai traffic light, owned by the Association of Malay Teachers (PGGMB). Anyway, I am curious as to where Sungai Katam is and what happened to it. I know Bruneians despite of our country's dimunitive size are capable of many things but to make a whole river disappear does take a bit of skill.

A few days ago, I happened to meet the Penghulu of Mukim Kianggeh (to the non-Bruneians, a Penghulu is probably the equivalent of the Head of a County, so county means Mukim). Mukim Kianggeh covers an interesting area - all the way from the Kianggeh river in Bandar Seri Begawan including the Old Airport and Government Complex area on the northern side to Jalan Telanai on the western side which included the Damuan Recreation Park. He told me that the present Sungai Damuan was previously named Sungai Katam. According to him, before the Damuan Recreation Park was built, it was just a riverside full of mangrove trees. So when the park was named Damuan, the river was officially changed as well because Damuan sounded better than Katam. I thought that was the answer.

Yesterday when I was at my dad's, I asked him whether that was true. My dad, a retired Ambassador, used to be in the District Office before he was appointed as a diplomat, said that was wrong. He said there used to be a small river or a riverlet that used to run off to the Damuan River and that was called Sungai Katam. You see, in Brunei, the word Sungai (River) is used for both big rivers and tiny little streams. In the English context, small rivers are known as streams. But in Brunei, even tiny little streams are called sungai thus leading to confusion. A number of these so called 'sungai' have actually been turned into huge monsoon drain. The nearest I can find in the Bandar area is the concrete drain along the Jalan Kubah Makam Diraja which is actually officially labelled as Sungai Telaga Tiga. It just looks like a huge drain to me and to about 99% of the people who passed along that 'river'.

I still cannot find that small river but what I was able to find that if you walk along the Damuan Park, there is actually a runoff running under the park. When the Park was built, the runoff was diverted under the park so that the run off has more or less disappear from public view.

How did I know my dad was right? He said not because he was a former Assistant District Officer, but because there used to be a relative of ours who lived next to the runoff, so that's why he knew that used to be called Sungai Katam. So, that's the answer to the mystery of the disappearing river.