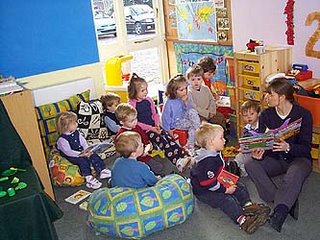 When I was doing my teaching practise in England (no, no, unfortunately I am not a member of that honourable profession of teaching - I took education as a subsidiary subject - my university had this policy that you must take additional subjects completely unrelated to your principal degree so that you have this more rounded education - and yes, there's only one university in England that does that) - anyway, back to my teaching practise, I got to teach at a few primary schools in England.

The first one was at a little coal mining village and that was the first time I have ever seen British working class children in their surroundings. The British has this social classes - not visible - but clearly identifiable if you go deeper enough and in education this is clearly visible. I was really moved by the 3 week experience I spent in that school. I enjoyed the school and the 100 odd children. The children I met have never met an Asian before, the only Asian they probably have seen in their short life was the Chinese counter girl and the Chinese cook at the Chinese Take-Away nearby. I had great novelty value.

The second one was at a much larger primary school near the university. The catchment area for the school is the middle and upper middle classes and the contrast to the first school I taught was really breathtaking. From the dresses and the uniforms to the way they studied and learned and talked, you can tell that these are two different worlds. Yet the schools were only about three miles apart at most. It really set the setting for one of the interesting things that you learn in Education psychology - that is the debate between 'nature' versus 'nurture' - in short, is intelligence inherited?

I presumed a lot of people reading this blog are fairly well educated and fairly well to do - Well, you do have access to internet facilities, otherwise you won't be surfing. The question is were you born clever or did you have to work at it? Therein lies the answer to our education policy. If intelligence is inherited, then we won't have to pour in that much resources into education but to do it more efficiently and effectively - however, if intelligence is nurtured, then we have to pump into so much resources to make sure that everyone is up to scratch. Whatever it is, we know, there is no way we can help everyone. Some will still struggle by the wayside. But we can't do that, there is just too little Bruneians to do all the things we want to do.

The government spends roughly $470 million for the entire school system comprising of about 250 schools of all levels and types and more than 100,000+ students from primary up to pre university level and yet for the 1 single university catering to about 4,000 students, the government spends about $50 million. I am not an education specialist to decide whether the distribution of that amount is equitable. I leave that to you to judge.

Unknown said…
Actually, yes. The amount is actually roughly equitable. A bit on the LOW side of equitable nonetheless. The real question you need to ask really is.. the distribution between secondary schools and primary schools.
Tuesday, May 23, 2006 12:20:00 AM