Nothing to do in Brunei?

May 01, 2006
Many people who do not know Brunei say there is nothing to do in Brunei which I thought was a bit shortsighted. Let me describe my Sunday yesterday which was a very hectic day. In the morning was a round of golf at the Executive Course at JPPC in Jerudong. Some derisorily called it the kindergarten course. It's not as easy as some people say though this is the first time in about 6 weeks of playing golf that I did not lose any ball or visit parts of the courses seldom visited by the other golfers. What a lot of people don't realise, it's a bargain at only $10 a game. More people should try it. 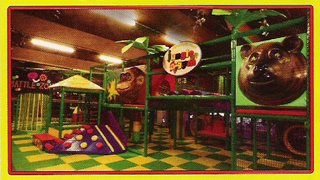 In the afternoon, I took my 6 year old to the Jungle Gym. I discovered the Jungle Gym by accident when I was hosting lunch for a technical assistance team from the Islamic Development Bank Jeddah at Le Taj over at Kiulap Complex. The Jungle Gym is on the first floor and Le Taj is on the second - both owned by the same person. The Jungle Gym is a new concept where there is this huge giant playground with a cafe inside it. The kids get charged $6.50 for a 2 hour session at the playground and the adults accompanying are free. The kids run around doing their things including teasing 'Nellie the Elephant' and shooting foam balls with tree top cannons at the Battle Zone. The small cafe served meals which are carbon copies of McDonalds including a small toy. The place was crowded but with the two hour limit, they came and leave. There were lots of bored parents obviously watching over the kids (another potential business there). What I found amazing was that even though these kids not know one another but they were playing with each other. Since these are multinational kids, that's even amazing. No prejudice, no nothing, kids are kids. Why can't we have this peaceful existence like this throughout the world?

Later in the afternoon, we dropped in at the Local Handicraft and Food centre at the Rimba Agriculture and Horticulture Complex. This place has ethnic dances performances on weekends other than just selling local food products and local handicrafts. The beauty about this place is that the entertainment is free and you can enjoy your food as well as learn about the local products. There is no cost, parking is free, entertainment is free and the only money you need to use if you buy anything. Other than that, it's free entertainment. Tell all your friends, your colleagues. Please. Who says there is nothing to do in Brunei?
PS. Thank you to ranoadidas.com for the plug on this blog and the website. The number of blog readers already high have jumped to higher level over the last two days. So, let me also welcome the new blog readers and hope that you enjoy yourself. Leave me your comments and email me your thoughts. I will respond whenever possible. And many thanks to ranoadidas.com for noting that I am a 'young man', it has been quite a while since I was called that. Incidentally, did you have your glasses on when we met?

BRUNEI resources said…
thanks - hope the site is useful. don't forget to visit my proper website on www.bruneiresources.com
Tuesday, May 02, 2006 11:07:00 PM

Anonymous said…
Well, it IS usually the young people who say there's nothing to do in Brunei, ie. nothing 'hot' to flock to. Personally what I miss about the UK are the massive bookstores (well, S'pore too, I suppose), museums, buskers and public theatres, and most of all the quiet parks full of flowers (I used to frequent pesiaran Damuan but despite the recent repairs it is still pretty run-down now).
Monday, May 29, 2006 11:15:00 AM

suhana said…
your information is very usefull to us.I've been here for 3 weeks and felt bored.At least now, i know where to go.Do you have any idea where we can find bday party organizer here in Tutong?use to have big party in KL.wish to have it here as well.Anyway, Good job Dear!
Tuesday, April 12, 2011 12:18:00 PM