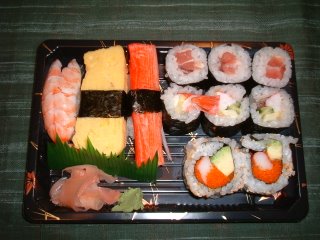 I remember in the late 1990s, the now Head Honcho of the IT at our agency was sent to Tokyo to attend a seminar, he wasn't the head honcho then. It was his first ever trip to the country of the rising sun and he told me he wanted to taste the tiramisu in Tokyo as apparently that was his favourite food at one of the Japanese restaurants in Brunei then. A lot of Bruneians associated tiramisu as being a Japanese dish because of that restaurant. He came back after the trip and told me that the Japanese didn't even have it. Tiramisu which is a sponge-based desert that contains chocolate and amaretto (an almond liqueur) is actually an Italian dish which means "pick me up" in Italian.

Another food served at Japanese restaurants other than sushi and sashimi, which people consider as Japanese is the tempura. But amazingly enough, tempura is not even an original Japanese dish. For those unenlightened ones, tempura is a dish of batter-dipped, deep-fried pieces of fish, seafood or vegetables. But what you don't know is that tempura is a Portuguese dish and the word 'tempura' comes from the Portuguese 'temporras', which means Friday, the day when deep-fried fish was eaten. It was introduced to Japan by Jesuit missionaries in the 16th century.

Even some food we consider as pure Japanese may not be so. For instance, Udon (wheat based noodle) is Chinese and was said to have been imported from China to Japan in the 6th century. Sashimi (raw fish) is not uniquely Japanese. The Finnish has something called 'Joulupoyta' made from raw salmon, whitefish or pikeperch, the Peruvian has 'Ceviche' (made from chunks of faw fish) and the Swedish has 'Gravlax', also raw salmon. Even the Brunei's food budu can be considered as raw and uncooked.

The ultimate error in the usage of Japanese is here in Brunei. I was invited by an Audit firm for dinner at the newly established 'Kaizen Restaurant' in Kiarong a couple of weeks ago. It was my first time there and its main feature is this toy train which brings sushi dishes around the bar. You just take whichever plate you want and you will be charged accordingly at the end. I guess the owner couldn't find a conveyor belt in Brunei and substituted it with the train. The error is in the restaurant's name. In Japan, 'Kaiten-Zushi' is the Japanese term for Conveyor belt sushi and not Kaizen. The restaurant should be called Kaiten. 'Kaizen' means 'improvement' and hence the QCC (Quality Control Circle) and the JIT (Just-In-Time) concepts are based on Kaizen - continuous improvements. I guess the owners do not want to call the restaurant Kaiten thinking that it might not sound Japanese enough and hence called it Kaizen which means continuous improvement. Hmm, I am not sure I want to go there now as I got this impression that I am being practised upon everytime I go there.

Anonymous said…
Odd that people make that mistake with tiramisu - most probably because real tiramisu is not halal, and only adaptations are available. I had my first tiramisu only a few years back in the UK.

I disagree with you on the uniqueness of Japanese food. Japan was close to foreign influences between the 17th and 19th century, so they've had plenty of time to work their culture into their cuisine. As you said, tempura was introduced by the Portuguese in the 6th century. There are two possibilities for the origin of the word 'tempura' - the Portuguese words 'tempero', and 'tempora'. The first simply means seasoning, so it isn't a favoured explanation. The second means Ember Days, or Quattro Tempora, relating to when Roman Catholics were forbidden to eat meat and ate fish instead.

You must allow for Chinese influences in Japanese food - they were after all originally Chinese a long time ago, eg. sushi actually originated in China, but vanished from Chinese cuisine by the 17th century. Some of their dishes may also have Russian influences, as they import most of their fish from Russia, eg. 'ikura' or salmon roe in Japan is known as 'ikrra' in Russia.

What's REALLY a new trend is the consumption of meat, especially pork and beef - Japan was completely vegetarian by decree from 675AD, and this was reinforced by the spread of Zen Buddhism between the 9th and 2th centuries.
Monday, May 29, 2006 10:56:00 AM

Anonymous said…
i agree with obi-chan. Japan is essentially Chinese, not only in its cuisine, but even in written script. For example, Kanji lettering which really are Chinese, is still used in Japan. Katakana scripture is derived from Western influence, a hybrid of both Roman letters and Hiragana. im not well-informed of the Finnish and Portuguese food though, so i think i'll pass on that =)
Wednesday, July 26, 2006 12:30:00 AM

Anonymous said…
Japanese are not in anyway Chinese..The Chinese influences in their culture were adopted by the Japanese(most distinctly the Kanji as as well as the Chinese were seen to be literally and culturally more advanced than the Japanese at one time). the Japanese had themselves developed hiragana and katakana. .

and btw, its all too common that Bruneians has a lot of misconceptions about other cultures due to what we are exposed to here locally, made my fair share of them till i actually take the time to look them up, can be embarrasing esp when you are overseas..haha.
Wednesday, August 11, 2010 4:26:00 PM