My wife and I were guests at the Japanese Ambassador last night for dinner. I won't describe the dinner but the usual Japanese food - sushi, sashimi, tempura, noodles were all there. My favourite Japanese food is always tempura and early this year I discovered Udon. So, there were all there for the dinner. During the dinner conversation, we discovered just how extensively the Ambassador had been throughout the country. I was very embarrased that he can describe more about Brunei than I can. And I thought I was a wide read Bruneian compared to most. 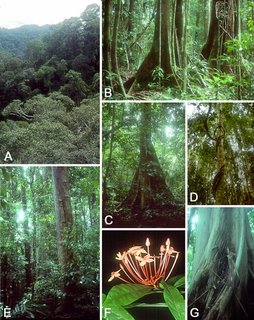 The Ambassador was describing about his hobby hiking through woodlands. One of his favourite was a trip he took to Sukang. He was searching for this hot water spring in the interior and his guide took him to Sukang from where he took another boatride for around 2 hours before reaching his destination. From there he had to hike about a couple of hours and swim across a river before getting to where the hot spring was. Unfortunately he could not make it as it was getting dark and adventurous though he was, he was unprepared to spend the night in the jungle. However one of his Japanese friends went and discovered that the river even though not as wide happened to have a baby crocodile. The guide stopped him swimming across as baby crocodile will have mother crocodile somewhere.

The Ambassador described a number of other places in Brunei that I did not even know exist including a butterfly collection taken from the Mount Pagon area. He described Brunei as full of interesting places to visit. This is what gets me. It takes an outsider to appreciate our country - the country we live in. Most of us can talk about Singapore or Kuala Lumpur or Bangkok or even some, Beijing etc and we can recall the various shopping centres and good places to visit. However when outsiders come and talk to us and ask where they should go and what they should do. We will describe the Istana, the Royal Regalia, the two mosques, the Handicraft Centre and a couple of other places and when ask to describe more than that official standard list, most of us have difficulties. We don't even know about the hotwater spring, let alone how to get there.

Maybe this is a good time for me to remind you as well as remind me about the need to be more widely read about Brunei and to be our own country's tourists before we start going out of Brunei.

Unknown said…
The jungle is not for me although I am sure interesting treasures await. :)

However, we have the most amazing beaches! I love the water. After all Brunei is surrounded with water. It really should be exploited!
Wednesday, May 03, 2006 1:37:00 AM

BRUNEI resources said…
really shows how much there is to discover about Brunei! i will blog on dat one of these days.
Wednesday, May 03, 2006 5:44:00 AM

Anonymous said…
I know the Japanese ambasador and his wife as well and yes they are avid nature lovers; the ambassador's passion is in fact collecting butterflies =)

But regarding discovering Brunei, I think the problem is information, or the lack of it. The public (inc the locals) need to know not only that such places exist, but where these places are. The ambassador had a guide, but most of us locals wouldn't know where to find a guide, let alone have one, so we tend to stick to the obvious places. Shahbandar anyone? ;)
Wednesday, May 03, 2006 9:43:00 AM

FlyBoy said…
There is a massive waterfall along the Jalan Tutong road next to the traffic light going to Bengkurong.It takes approximately 15 seconds to walk to it and is a well-kept secret.A few hundred yards away from the waterfall is a sloping tunnel that leads to the hills along Jalan Tutong and one an walk all the way on the ridges up to Telanai.
Wednesday, May 03, 2006 10:55:00 AM

Anonymous said…
errmm... we the see the forest everywhere, so we dont bother about it?... We dont have big modern buildings/shopping complexes in Brunei hence we tend to mengayau at other peoples' cities, i.e. Singapore, Manila (and Beijing you say?)... afterall those who can afford to go overseas are mostly are those who can afford to shop there...

Anonymous said…
I just got into photography recently and has been thinking up of places to take photos.

The jungle is appealing but there is but one problem.

I guess for people like me who has been living in the 'city', it is difficult to venture out alone (unless you have a guide which of course I don't know one. >.>)

Basically after reading your posts it kept me thinking. One of the main obstacle is perhaps that most of us haven't got an inkling on survival skills in such situations. What to pack, how to NOT get lost, what to do in case of 'emergencies', and the likes. I might be just speaking for myself.

Also something just creep into my head while typing this. Now I wonder how many Bruneians will actually buy a book about Brunei (as posted by Anonymous above haha.). I know I would (because I'm looking for one) but just wondering bout the general public. Hmm....
Saturday, May 06, 2006 12:04:00 AM

Anonymous said…
What happened to everyone not only Bruneians are they tend to ignore the 'beautifulness' of their own country..They prefer to explore other countries than their own country just because that place e.g forests, lakes, historical places etc will always be there at any time you want..Just like what the Malays like to quote "di mata-mata."..That's why we take those place for granted..

One more thing,it probably due to the society as well..For example people like to ask which country have you been to and Oh..have you been to KLCC, Takashimaya etc..Hmmm..Why don't we twist that question to "Have you been to Pulau Cermin or Belalong?" for instance..

Need to develop a more adventurous Bruneian in the future..Not only to gain more information of your own conutry but to increase health awareness among us.. :D
Saturday, May 06, 2006 5:44:00 AM

Anonymous said…
U r so right, we really haven't a clue about all the amazing spots we have in Brunei. And I agree with hiking lover, the problem is our lack of information. Somebody really needs to promote all these places on a bigger scale to Bruneians, not just visitors.

Hey, can you write about other places of interest and how to get there etc, if you happen to know?

Oh and another blog topic i want to suggest is re our traditional weddings. Kawin sudah, but I didn't have a clue what the significance of certain ceremonies were! (yes, how clueless can you get huh!). Like bebadak atu...I had trouble trying to explain that to my overseas friends!