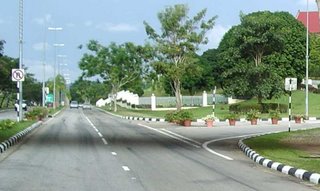 Jalan Pehin Dato Perdana Menteri Sheikh Abd Halim and Jalan Pehin Dato Perdana Menteri Sheikh Hj Abd Rahman - how many blogreaders would have any idea where these roads are? How about Jalan Dato Abas Al-Sufri? How about Jalan Maharaja Lela? Maybe you know Jalan Lintang? Jalan Simpang? How about Jalan McArthur? Jalan Cator? Still no? Jalan Sultan? Finally, a name you know. These are all roads within a 2 mile radius of Bandar Seri Begawan. It's amazing sometimes most of us drive around the Bandar area without realising the names of the roads. Honestly speaking, I have not been paying that much attention either if not for the fact that for the last 10 months I have been sitting at the back of my official car and watching road signs everyday.

From sitting too long at the back of the car, I have worked it out - roughly the naming of official roads in Brunei Darussalam stopped somewhere in the 1970s and roads are named sparingly over the last 20 years or so. I divide the naming of roads into about four time zones. The first part is when Bandar Seri Begawan, Kuala Belait and Seria were developing. Every little nook and cranny was named. You even get backalleys with names - if you don't believe me, drive around these three places and go to the back of the shop houses etc - you will find names for everything. Some of the names really require deep knowledge of Brunei history. I know most of the English names are from the then British Residents and British High Commissioners. Most others come from historical figures though I am still tyring to figure out who Pehin Dato Perdana Menteri Sheikh Abdul Halim or Pehin Dato Perdana Menteri Sheikh Haji Abd Rahman is.

The second is when roads are being developed further inland. The naming authorities used whatever names that were used for that particular place. Hence you get names like Jalan Madewa, Jalan Telanai, Jalan Bengkurong, Jalan Tanjung Bunut etc. Nothing significant there. Some original names are used like Jalan Haji Halus in Bunut - which I presume is named after someone. Some names are used for convenience. I remember there used to be a road called Jalan Kustin somewhere in Berakas because that was when a construction company called Coastin or something similar was based there. That is probably one of the few roads which was renamed. I think it's called Jalan Terunjing Baru or something. Another recent naming convention was to used the new linking road. Hence you get the Berakas link road, connecting Jalan Pasir Berakas to the highway. Technically speaking this should be renamed and not to be left as a link road. Some roads started as two separate roads and meet somewhere - Jalan Subok is such a road, it started from one end and Jalan Sungai Akar started from the other end. Half way they met and the names remained. Jalan Haji Basir meets Jalan Kumbang Pasang meets Jalan Berakas and meets Jalan Pasir Berakas. Tell me where each end and each started.

The third is the new housing resettlement schemes. The latter ones are less imaginative. The earlier housing resettlement areas such as Kampung Anggerek Desa has got nice names like Jalan Delima Satu or Jalan Anggerek Desa or those in the Perpindahan Berakas area called Jalan Durian, Jalan Rambutan, Jalan Belunu and the likes. The newer housing areas such as Lambak Kanan and Rimba are very Spock-like (cold and logical) and are numbered - Jalan 1, Jalan 10, Jalan 60, Jalan 77 etc and those in Mentiri has Jalan A, Jalan B, Jalan C etc. Though the confusing bits are some road numbers disappeared and are replaced by simpangs. So you would get Jalan 1 and Jalan 10. Search as you might, Jalan 2 to Jalan 9 have disappeared as they became converted to a simpang numbering. The more enterprising residents kept the old names like Jalan 98 and put up their own label even if the official label is no longer there.

The fourth is the usage of simpangs. The simpang numbering is probably one of the more innovative scheme the Brunei government has ever come up with. I think we should export this idea to other countries around the world. I have to say that despite my extensive experience in other countries, I have not seen anything as ingenious as this. The only problem is that this scheme became too successful and used all over despite the fact that some simpangs have grown so large that they became whole new roads by themselves. Some of these ought to have names otherwise you get more confusing addresses like Simpang 89-98-8-9-18.

To me, someone should relook back into all this and start to name some of the bigger numbered roads. If you go to Jalan 77 at the Lambak Kanan area, that road deserved a proper name when it has more than 200 houses in the few miles length of that road. In fact, I would even argue that Jalan 77 which is probably about 50 times longer than Jalan Pehin Dato Perdana Menteri Sheikh Abd Halim (200 meters long) ought to be renamed. I guess if you have nothing to do on a Sunday and you really want to fulfill your time. Drive around and just look at road names. It's fun.

naz said…
I've been thinking about Brunei roads for a while too. In fact, I'm trying to find out the stories behind the road names, as many Kampung names do.

I'm not sure on the validity of this, but here's an interesting thing I've noticed: a Jalan name is only given to stretches of road which connects a Jalan to another. Using that logic, Simpangs are roads which only connect to one Jalan. I hope someone can verify this for me.
Sunday, May 21, 2006 1:18:00 PM

Anonymous said…
My grandmother has an excellent memory when it comes to remembering names of the Jalans. It's amazing that she lived long enough to see what Brunei had developed from. Sometimes she gives mini history lessons about the persons behind the names. Facinating really =)
Sunday, May 21, 2006 9:34:00 PM