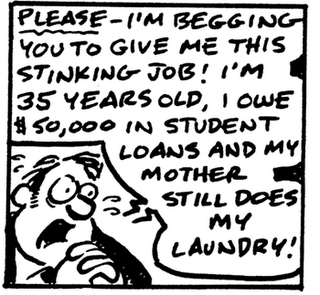 Our people selection system is not the best. It is not even close to anything you would have learned in Human Resources classes. This is where you should take advantage of it. By the time you get to the interview stage, you have roughly a 1 in 20 chance of landing the job on average. The three member panel at SPA has roughly 20 minutes to assess whether you are suited both in terms of capability and character. It's not that hard to fool us. I have had my share of people whom I have interviewed and recommended and a few years down the road, very much regreted my decision.

The panel is made up of 3 members, the one at the end is the secretary who looks after the paperwork, so you can ignore him basically. The one in the middle is a representative of SPA and can be an SPA board member. His role is to see whether you are suitable and whether your appointment should be defended in the SPA meeting. The third panel member is the most important. He decides whether you have the technical capability. He is the representative of the ministry or department that has the job vacancy. The higher the post, the more senior that representative.

Out of the three, the representative will be the one who will ask you the detailed questions. Focus on answering this person's questions. Because you could be the most polite person in the whole world and with the best of behaviour but if you are ignorant and incapable of carrying out the job, then no way will you be chosen. So do be careful. Impress on him or her that you are capable, you get your foot in the door. The chairman normally ask the more mundane question - the questions are more like tie breakers. At the end of the whole interviews, the panel would have narrowed the field to about a few people, so the panel sometimes need tie breakers and this is where this comes in handy.

The SPA member questions can be a little bit unpredictable and depends on the characters. I remembered one who used to ask what MIB stands for. All he wanted was the three words. But a lot of people was so confused by the question that they rattled on about the whole philosopy of it. The next question he ask would be since the country has an Islamic philosophy, what then is the islamic date on that day. I remembered a few sessions with him, I think there was only 1 guy who managed to get the right answer. He did not get the job. Do we care if you know the Minister's title? Not really at that point in time. Knowing would be a bonus if the question was ever asked. I never did. I don't see the point.

There are many things to talk about the interviews - from the argument on which system is better to all sorts of other things such as what to wear, when to knock etc. This blog space is just too short for it. But at the end of the day, as I always say, give it your best - you have 20 minutes to convince us you should be given the job. Good Luck!
Very Late PS: My colleagues have been pointing out that I am out of date (to which I replied I never hide that fact - in fact I stated at the beginning of the blog that the last time I did an interview was 10 years ago!) - and that changes have been made. Yes, I agree. But to me the point at the blog was - at the end of the day, you still have to convince me (if I am on the panel) why we should hire you.

Your vast experience never fails to astound me and most probably many others.

I am already working but I am considering a change in environment and am mulling over a career change. I love my current job but I have ambitions.

My current job offers little chances of going up the ladder. Your post today will be of great help if I do decide to apply for the position and get an interview.

A couple of questions Mr BR Sir - The interview is conducted in Malay only or both in Malay and English?
And since u do not see the point of asking Minister's title wot about others on th interview panel?
Sunday, July 23, 2006 12:01:00 PM

SPA have changed now. The mundane questions have been replaced with a structured questionaire meant to fish out the character and the intelligence of the applicants. Though they still asked whether the applicants know the ministers name etc.. this they do cause it just shows whether applicants are observant enough to bother about their beloved country or not. Anyhow the guy in the middle somewhat compliments the ministry or department representative..
Sunday, July 23, 2006 2:44:00 PM

BRUNEI resources said…
annonymous: yes, it has been years since i have been on one. my colleagues have been protesting that i am writing about something that was 10 years ago and a number of improvements have been made. so, i m a bit out of date. in fact today i met three new members of SPA who are 'more modern' in approach so i dare say that there will be more changes in spa to come.

sirtambak: knowing the minister is a plus but not a necessity. it test whether you are aware at least of the current development. i never ask and even if i do, i don't expect you to remember the full title. the important issue is to focus on the technical side of the job - your capability not your capability to remember some stuff which you can always check. from my experience on the panel, not remembering or not knowing who he is is not a minus point but remembering is a plus point - so don't get me wrong by me saying it's not that important - on the panel, you need all the plus points you can get.
Sunday, July 23, 2006 5:53:00 PM

Inspired said…
Hi my dear friends, just happened to come across this blog sites and actually have been reading them these few days. Seriously very interesting and great reading them! It really opens my eyes knowing more about our nice and peaceful neighbour, Brunei and the friendly Bruneians! :)
Monday, July 24, 2006 12:38:00 AM

Would you please write more on points to score a job interview for Brunei government posts?

Frankly, I am extremely scared because I have absolutely no job experience whatsoever, saved for the occasional training schemes.

Anonymous said…
Ohh great, i mean with the tips and all. I just got interviewed at SPA last month, and just badly enough though, Ive got the answer yesterday with sad ending story. Perhaps, I didnt get it done properly, or perhaps I just have my bad luck heaving me behind my back without me noticing it. Considering I do have all the knowledge for the interview session, I guessed it was what I've said was taken differently. Bummer to say the least :/
Monday, July 24, 2006 9:55:00 AM

Anonymous said…
The interviews that I have been to have gone differently, the biggest difference being that none of them were conducted in or by SPA and yet they were all for government posts. Most notably is that one particular Ministries has their permanent secretaries conduct interviews for Division 2 and above posts.

The whole 'you must know the names of the Ministers' etc thing is a widely held belief, for whatever interview conducted by the government (scholarship, job etc). I have personally never seen the need to learn their names or titles by heart and can't say that my ignorance has ever caused me any harm. I think the government should clarify that this isn't needed for interviews, as trying to memorise all these names is a waste of time.
Monday, July 24, 2006 11:39:00 AM

I hope its not late for me to express my opinion regarding this issue..

I think SPA should improve their way of selection process for new appointment.

With a lot of graduates in the market (more supply) the government should make this competitive!

Furthermore, once we employ these people we will stuck with them for many many years... thus selection process / appointment process is very important. [Our government are so kind that I never come across of people get demoted or fired unless for disciplinary action and in some case just transferred but still receiving the same amount of salary].

I knew of one private sector which took one whole day for the interview and selection process. Infact invited applicants for an informal dinner day before that. I knew the hidden aims were to see skills like leadership, communication, decision making,etc and at the same time accessing individual personality.

I am not saying that all position in government need to undergo a thorough interview/ selection process. Just for Division II and above as these people are our leaders of tomorrow.

With so many people wants to work with the Government but not so much post, I think it would be appropriate for me to suggest that the appointment / selection be audited by an independent committe to ensure 'ketelusan' of the new appointment.

Anonymous said…
How are bureaucratic elites recruited in Brunei? From where do they start? In France the selection comes from the elitist schools (probably parallel to Maktab Science) then they get trained at the Ecoles (ENA). In Britain, most of them are graduates from Oxford, Cambridge and the London School of Economics. I wonder what the whole process of recruitment involves...and if they all have to start from the post of administrative officer? Are women allowed to become AOs?
Saturday, August 19, 2006 2:36:00 AM

I think SPA is now conducting exams and interviews for job application. Do you happen to know what sort of questions do they ask in the exam?
Monday, March 19, 2012 9:42:00 PM

Anonymous said…
People with the best behaviour and the most polite is the answer..its called adab..YOUR PROPHET SAW TAUGHT THAT 1400+ years ago..not alot even care about him nowadays..Islam is adab..courtesy..it is a religion but it also teaches everything..it even tells you the best way to pick your nose..so to put behaviour and being polite on the same level as incapable of carrying out a job is ignorant..