March 02, 2007
I find it ironic that for Brunei Malays or Brunei Chinese that we are proud of whatever race we belong to, we speak the languages but surprisingly if I was to ask the Malays - do you read Malay books and the Chinese - do you read Chinese books - the answer I get is often the negative. Not many of us read books in our native languages yet we all race to the next best selling English novels. Some have argued that the standard of either the Malay or Chinese novels have not yet reached those of the Western English ones. Is that right? Have we read our own languages' novels to determine the quality? Are we too snobbish?

I too am ashamed to say that I don't read Malay books as often as I should. Over the last few years, I have read a number of Malay reference books but I don't remember reading more than 1 or 2 Malay novels in the same period. Surprisingly for elder folks like me, we went through 4 years of primary Malay school before being taught English in the 3 years of English preparatory school before Form 1. I didn't read my first English book written by Enid Blyton until I was about 10 or 11. But since then, I have hardly ever read Malay books. The few books that I remember reading was Hikayat Abdullah, Ranjau Sepanjang Jalan and a few other classic Malaysian novels. Other than that, zilch. 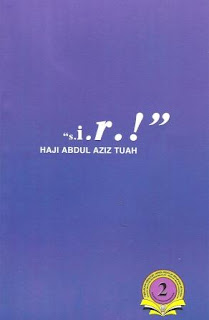 Dewan Bahasa over the last few years have fought valiantly to bring up local Brunei writers. I have to applaud a few of them who despite having to overcome massive indifference have continued to write, all in the love of writing. Despite poor sales, they continue to churn out novels after novels. So today I thought I will focus on one novel which happened to be written by a junior colleague in my agency. I chose him because he has won a prize (2nd prize in last year's book Writing competition) but more importanly this is not his first book. Despite having to buy his own books and giving it away as presents, he has persisted in writing and for that I admire him.

The book strangely entitled 's.i.R!' is written by Haji Abdul Aziz Tuah (his first book was enigmatically entitled G.P.). The book is about a character who sought to control his anger as he goes through life fraught with challenges, situations and characters which seriously tested him to show his 'true' colours. The youthful character named Jebat was a fluent English speaker and likes to showoff while at the same time he faced turmoil in his life facing a physical assault charge and finding himself living away from home turned out by his Police Inspector father who remarried after the death of his mother. Throughout the novel, you would find yourself seeing the local Brunei world and society from the eyes of Jebat and seeing how others treat you as you go through life.

The book is written in standard Malay but the spoken languages were mostly Bruneian Malay with smatterings of English and some other local languages. It has an interesting ending which you have to read if you want to know. According to the author, the title is the first in Brunei and probably in the world too. Though honestly I am trying to figure out how the title is related to the book. But the title is an eyecatcher at least. Get the book from Dewan Bahasa booth at the Indoor Stadium for $4.75. Come next Monday, the book will be available for $5 from Dewan Bahasa in the capital. Do support our local Brunei writers.
books culture current affairs

I have great admiration for his determination in achieving his life-long dream to become an author. I can throw an idea for him to write about the contrasting story of a 'High-Flier' Bruneian bureaucrat like your goodself from an educated family and a 'junior staff' like himself (an orphan) also from a good family breed but who grew up in Kampong Ayer.

Did you know that you both started schooling in Darjah 1 the same year but you made it as one of the top 10 Bruneian students to be sent to Singapore for Secondary 1 and he studied in SOASC then...
Tuesday, March 06, 2007 8:24:00 AM