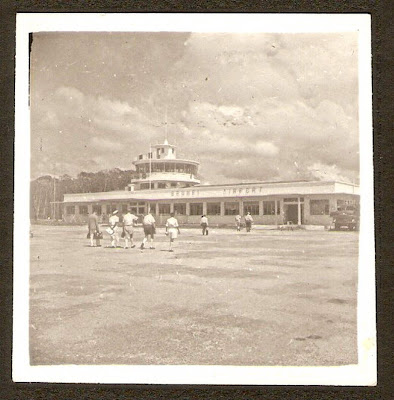 I was furious the other day for not being able to win this photograph on ebay. I was wondering who else is out there trying to win old photographs of Brunei. I hope that collector is a Brunei and would one day be able to share with us his collection of photographs.

This particular photograph is of the old Brunei Airport. If you don't know where that is, I suggest you walk over to the Government Printing Department at Old Airport Road (where else?). The Government Printing Department now used this old terminal building as its headquarters. It's kinda cool. I remembered in the 1960s when my father was the Director there, his office was at that round old control tower. It was interesting to have a circular office with glasses all the way around.

If you can find your bearing and you can see where that building is now, you would know that the road passing through Ministry of Education, PWD and SPA Buildings on one side and Bomba building and the Government Printing Department buildings, you would be standing on the former runaway. 40 years ago, planes would be zooming up and down the runaway instead of cars.

That is why, my dear very young readers, the government complex at Berakas is called the Old Airport. It was literally the old airport.

Brunei Foodies said…
i remember watching a motorcar racing event there, i think it's the one and only ever held on it's runway. i believe my late dad took lots of pics, problem is somehow the pics have gone missing.
Monday, August 31, 2009 10:59:00 AM

Anonymous said…
I think i still have photo graphs of the opening of the airport by the then Sultan OAS cutting the ribbon. Two person i personally knew on the photo were late Dato Talip n late Pehin Taha
Tuesday, September 08, 2009 9:06:00 PM