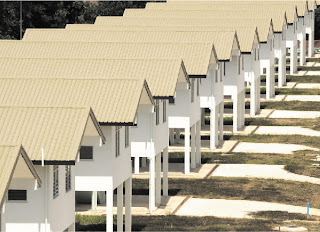 It was a late night again last night. The night before was MOD 5 MCYS 0. Last night was making sure the seating arrangements and all other arrangements are okay for today's ceremony. Just in case there is any last minute thing.

This morning, His Majesty will be handing 70 lucky land owners with their own land titles and 38 people the plaque to their own houses at the Parit Community hall. The 70 land title recipients are those whose land holding original held under the temporary occupation of land, had build houses on it, had lived on it for at least 5 years and has no other land. The 38 people are the remained of Phase 1 of the housing for indigenous scheme at Lumapas.

Usually His Majesty will also visit other places while on the way to visit the houses. Today will be the Ideal Multifeed Farm, the Bayu Ilham Company both at Jalan Bengkurong as well as the Sengkurong Post Office and new Sengkurong library.

For those wondering when the houses are going to be ready, some statistics of the very near future - 303 houses at Rimba will be balloted by the fasting month so that recipients can move in before Hari Raya, 127 houses at Lumapas around October and 177 houses at Sungai Liang around the beginning of the new year. After that there will be around 400 houses at Meragang sometime next year. The target for the current RKN is still 10,000 houses to be built by the Housing Development Department and the Public Works Department.

Under the poor and the needy program financed by the Brunei Islamic Council, 38 houses in all the four districts are currently under varying stages of completion. Together with my colleague from PMO, we will be visiting those houses on Wednesday to make sure there will be available for the recipients very soon. For this year, there will be another 20+ such houses that will be built. The Islamic Council has made more than $30 million available for the project. About 500 applications have been received for Phase II of the project.