August 10, 2009
I have a confession to make. I did not go to a single wedding invitation yesterday. My apologies to the 5 families who invited us. My son wanted to go visit the museum and I thought why not. We have not gone out for a while and when my son expressed interest in museums, I am not one to disappoint. I try to visit Brunei's museums every so often even if there is nothing new to see. I always managed to find something interesting. But that's me.

We went to the Royal Regalia Museum. I haven't been to this one for a good two or three years. When we got there, it has not changed at all. The same no camera, no shoes etc. Sorry, one thing has changed, it has lockers for keeping your bags (and cameras) in. I have often been irked by this no camera rule in museums. I know the reasons behind it. First, the possibility of the photographs being exploited commercially and second, flashes (very bright light) can destroy what the museums are trying to preserve. But anyway, the Royal Regalia museum staffs do not seem to mind the many tourists flashing away. 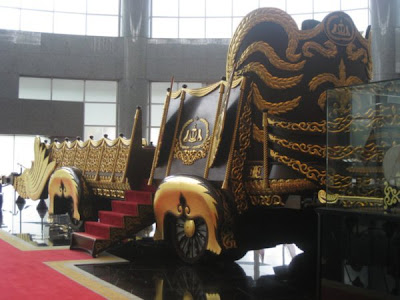 If you have been to the Royal Regalia museum, there is nothing new to tell you. I still find both usungan, used by His Majesty the Sultan very grand and wonder how the soldiers managed to push them through the city centre. I remembered the 1992 Silver Jubilee celebrations as my wife and I were somewhere near Jalan Roberts being spectators.

There are many more photographs now being hung along the walls which I noticed. I especially wanted to visit the Constitutional History section but when I got, that section was closed. I remembered the two staff who had walked past us when we got there. Now, I don't remember any sign that says that certain parts of the museum was closed. That's the one section I really wanted to see. It has all the documents about our recent constitutional development etc. That was a major disappointment.

I thought we were done but my son said we should also visit the old museum at Kota Batu to visit the whale. I mentioned about the whale skeletons in the car and now he wanted to vist the whales. The whales are part of the new natural history exhibits at the museum in Kota Batu.

So we went there. I realised that the total number of visitors were outnumbered by the museum staffs and gurkha guards. Anyway, the new natural history section had been revamped and the new exhibits including skeletons from whales, dolphins and porpoises - all animals which had died on our shores. This section is a worthwhile visit.

The other sections in the museums had remained unchanged since it was opened, I think. The Brunei history section and the cultural history section (complete with its ancient Brunei food) definitely were there from day one. The shipwreck section was relatively new but by now it had looked as if it was there from day one too. The oil and gas section was fortunately closed and undergoing renovation. So that's something new. The Islamic exhibits as usual is a worthwhile visit.

I found something new as usual but I wished there were updates. Many things had been found since the Museum opened but the exhibits have remained unchanged.

We had lunch at Tarindak d'Seni which is the new restaurant at the Brunei Arts and Handicrafts Centre. We couldn't get a seat at the restaurant. So full. We sat in the cafe instead and had ala carte menu instead of a buffet. The food was good and I recommend everyone to go there. The buffet cost $15 per person for lunch which I was told is good value. I can't comment. I couldn't get in. Anyway, my family enjoyed the museums and the restaurant and I am happy.