Showing posts from January, 2011
Show all

For Brunei Darussalam 2010 was a year of consolidation and building for the future. The economy has emerged from two years of negative growth amidst the fallout from the global financial crisis, and there are projections of better things to come in 2011.

While final year-end figures have yet to be released, it seems the Asian Development Bank’s forecast for GDP expansion of 1.1% will likely be met.

With the hydrocarbons sector contributing around 90% of Brunei Darussalam’s GDP, a steep rise in prices – with oil ending the year just under the $90 mark and expectations that it could top $100 in early 2011 – could have a major impact on the economy.

Additionally, oil production is set to increase in coming years to 200,000 barrels per day (bpd) or more, as a result of new fields coming on stream and of long-term efforts to raise output from existing fields to above the average of 190,000 bpd…
1 comment
Read more 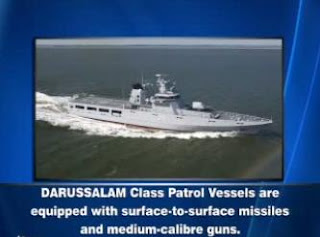 [Note: I wrote the following article on Sunday morning 16th January 2011 for it to be published on Brunei Times on 17th January 2011. It was the conversation with Pehin Jalil which gave me the impetus to write this article.]

This writer was in Islamabad recently. Regular column readers would now be asking what have Islamabad got to do with Brunei history. The answer to that would be none.

It just so happened that this writer met with the Brunei High Commissioner to Islamabad. The High Commissioner was His Excellency Pehin Datu Penglima Col (R) Abdul Jalil Haji Ahmad. He was formerly the Commander of the Royal Brunei Navy before he retired and became a diplomat.

During the visit, this writer and His Excellency Pehin Jalil discussed issues of developments in Brunei Darussalam including the recent news that the Royal Brunei Navy had accepted two brand new Darussalam Class Patrol Vessels named "KDB Darussalam" and "KDB Darulehs…
Post a Comment
Read more

Memoirs of a Warrior 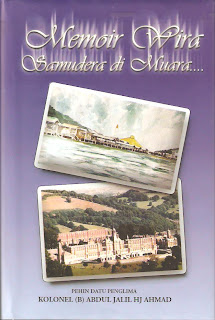 I don't think I have ever met Pehin Datu Penglima Colonel (R) Abdul Jalil before. Yet when I met him at the hotel greeting and welcoming us, the Brunei delegation to the OIC COMSTECH meeting, I was at ease. He certainly made us feel very welcome and the Embassy staff looked after us very well. I was with him when we attended the official dinner hosted by the Prime Minister on the first night. And he hosted the dinner for us on the next night.

During the conversation, we discovered that he had actually penned his memoir. According to him, he wrote the book much earlier - during the leave period just prior to his retirement. However he published and printed the book when he was in Pakistan. He sold some and he gave away some. I was lucky enough to have gotten a copy personally signed by him which he gave during the dinner.

The book is indeed interesting. Pehin Datu Penglima was Commander of the Royal Brunei Navy when he retired. He was trained at Royal Naval Staff College at Dartmouth…
Post a Comment
Read more 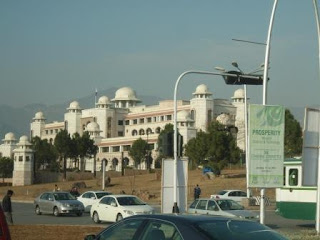 I am now on the way home via Dubai and Insya'Allah will be home by Friday morning. The flying home began by leaving the Serena Hotel on Thursday at 1 am, the Emirates flight to Dubai at 3 am and reach Dubai at 6 am. Stay in Dubai until 10.30 pm before taking the BI flight back to Brunei. Enjoy some of the photographs I took along the way in Islamabad. Remember Islamabad is like Old Airport Government Complex - full of government buildings! 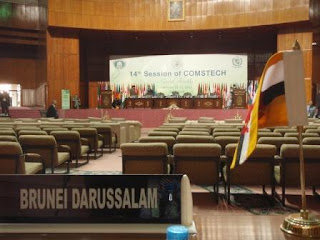 The number of meetings overseas I attended last year was in the double digits. It is ironic as I don't like to travel. I don't mind the occassional overseas meeting now and then just to keep in touch with what's going on in the international world but last year was exceptional.

A few of them were for my other hat being a member of the CSPS and some additional ones were because the meetings took place only every few years and last year happen to be the one year, most of them were held.

In most of the meetings last year, even the ones organised by the United Nations, the security was minimal. There were screenings, metal detector bars etc but none that I can not tolerate.

I especially hate it when going in and out of hotels that you have to subject yourself to all these checks. It's not just the x-ray machines but the metal detectors, the pat downs. Practically everything you have on you makes a ping. The only way not to be suspicious was to walk totally naked! Some argue…
1 comment
Read more 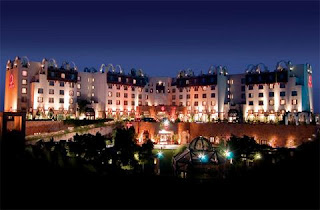 Greetings from Serena Hotel in Islamabad. I have only seen the main entrance of the hotel. According to ckarachi.blogspot.com, the hotel is located on the foothills of Margallas on fourteen acre area with beautiful gardens near the Rawal Lake. The architecture and interiors of this fabulous hotel building are a mere reflection typical Pakistani cultural heritage depicting the skills and craftsmanship of talented artisans. Being state-of-the art building, the hotel beautifully combines traditional systems equipped with latest technologies.

It's 2:48 am Brunei time but only 11:48 pm here. I have only just checked in after a long almost nine hour flight from Brunei to Dubai, stayed there for a few hours and another three hour flight from Dubai to here. The ride from the airport was uneventful, we had the security personnel with machine guns leading the way. So it was really fast. The Brunei High Commissioner has warmly greeted us with his staff at the hotel and did all the checking in…
1 comment
Read more

A Historic Journey Through Sabah 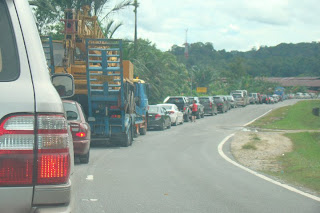 [Note: Together with about half of Brunei, my family and I were in Sabah over the December holidays. We flew there but my brother in law and his family drove there. When we met up, he drove us around including taking us to Papar. On the way back to KK, I was reminded by the road signs of the historical significance of Sabah. So I wrote this article and this was published in THE GOLDEN LEGACY column on BRUNEI TIMES on 3rd January 2010]

A Historic Journey through Sabah
by Rozan Yunos

During the last holidays, there were so many 4-wheel drive Brunei registered SUVs in Kota Kinabalu that the driver of the hotel’s car that the writer was staying in, thought that in Brunei, no one drove small cars. There were indeed many Brunei holiday makers in Kota Kinabalu and all parts of Sabah, some ending up going up to the peak of Mount Kinabalu. Virtually all of those Brunei cars drove for about 6 to as long as 10 hours to get from Bandar Seri Begawan to Kota Kinabalu.

The quest for Year 6 text book continues. The other day, I happened to be at Bismi Gadong when a van drove in and dropped boxes of books - all new textbooks. It was interesting to watch the scene. There were quite a number of parents, students there and everyone started to hang around and wait for which books will now magically appear out of these boxes. After about half an hour or so, most of us realised that the Year 6 books which are not yet available will still continue to be unavailable.

Last night, interestingly enough, I opened my email and pop out this email:-

My name is Taj from NollyBook.com. I have been informed via my wife of your article of search of SPN Year 6 TextBook/Activi…
Post a Comment
Read more

The Origins of the Calendar Months

[Note: I wrote this article over the last weekend of 2010 and emailed it to my BT editor whether they would like to run it. I did not receive any reply but apparently Brunei Times did run it. It was published yesterday.]

The Origins of the Calendar Months
By Rozan Yunos

Human beings have always been curious and have realized that the need to know and to keep time was useful to their lives especially in knowing when was the best time to sow and reap their crops. They look to the sun and the moon for their guidance. From these observations began all calendars with people recording time using the natural cycles of the moon and the sun.

The difficulty was that the Earth year does not quite round up nicely. The earth year is 365 days 5 hours 48 minutes 46 seconds long or 365.242199 days and the time between full moons is 29.53 days. At first the calendars need constant adjustment but the Romans eventually had the best calendar and that was used and had influenced us till today including t…
Post a Comment
Read more

Where are the SPN books? 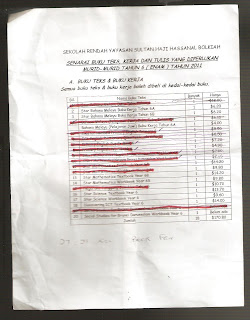 I have been carrying this piece of paper for about 6 weeks now. Ever since, school closed and my son said that his teacher told him that these books must be purchased for the start of the school year in 2011 which is tomorrow, these books had to be acquired.

I thought it was simple. Bring the list to any bookshops in Brunei and buy the entire set. After the first bookshop, I realised it would it not be as simple as that. The books were not there. The bookshops could not tell me when they would be ready. There is no point leaving telephone numbers at any of the bookshops as they will not call you back, so the only way is to drop in almost everyday to these bookshops to check which ones are available. Up to yesterday, I am about 9 books short. But of these 9 books, two of them are textbooks for Science and ICT which means if these books do not arrive by today, my son and the entire Year 6 in Brunei will not be able to start their Science or ICT classes. If there is anyone reading this fr…
6 comments
Read more

So, you want to celebrate new year? Which new year?

January 01, 2011
[Note: I published this article on today's Brunei Times. It is a rehash of an earlier blog entry in 2007 if I am not mistaken and I wrote the full article for that and publish it in the New Year of 2008 for Brunei Times. I used that article as the basis for this one. Happy New Year 2011 to everyone.]

SO, WHAT IS IT ABOUT 'NEW YEARS'?
by Rozan Yunos

TODAY is the first day of 2011 AD. For those who did not know, AD stands for the Latin words "Anno Domini" or "the year of Our Lord" and as the Oxford Dictionary has pointed out AD refers to "the Christian Era". For those who prefer to use a non-religious connotation, they can use 2011 CE where CE referred to "Common Era".

Nowadays, the beginnings of the new years of the Common Era are celebrated generally. Many places have become unofficial centres. In London, it will be at Trafalgar Square where everyone will be counting down the last few seconds to the New Year; in New York, it will be…
Post a Comment
Read more
More posts