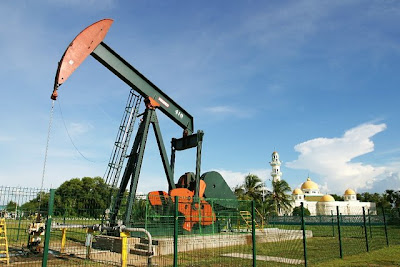 This is normally how many international journalists wanted to depict Brunei. Oil and Islam. And the easiest way to get it is to use a photograph of the oil donkey with the Seria Mosque in the background. Watch videos or productions about Brunei, inevitably this scene will come out, taken from many different angles. I have watched so many that the show will surprise me if it does not have this scene.

Oneo of the unknown fact about Brunei is that the oldest mosque still currently being used in Brunei is this mosque, the Masjid Seria. It beat the SOAS Mosque by about 4 years. The first Seria Mosque was built in 1938 by the Muslim residents and the Muslim Workers of the then British Malayan Petroleum Company.

That was replaced by the current mosque when it was built in 1953 at a cost of a quarter million dollars. It was completed on 19th September 1954 and His Majesty Sultan Haji Omar Ali came to officially opene the mosque. This mosque was enlarged in 1984. This is what the mosque looked like when it was first built in 1954.