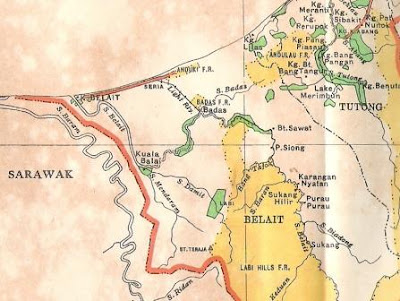 Yesterday I mentioned the 1952 Brunei Darussalam Annual Report. Last night I had a closer look meaning that I actually read the book.

What intrigued me was the map of Brunei at the end of the book. Two things stand out. One, the road linked from Kuala Belait ended up somewhere in Anduki. And the other end of the road was at Sungai Abang or if I had scanned a bigger section, the other end would be at Kampung Kuala Tutong. In 1953, there was no road linking Brunei Town to Kuala Belait. One has to drive all the way to Kampung Kuala Tutong and then take a ferry across to Danau. From Danau, one has to drive carefully along the beach until about Anduki before finding a road to Kuala Belait. According to my father, the driver has to drive on the wetter part of the beach as that is more firm than on the drier part which as loose sands. But driving on the wet part is also fraught with danger and then a wave might be able to shut down the vehicle's engine.

The other thing that stands out is the light railway joining Seria to Badas. Shell in those days run a small railway. I have shown photos of that railway before in this blogspot. You can no longer find this on any Brunei map anymore. 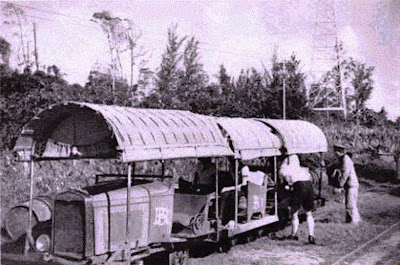 The only other railway line was connecting Brooketon coalmine in what is around the Kampung Kapok/Mengsalut area to the present Muara. That was at the turn of the 20th century.

canon25 said…
hy..I'm wondering where do you get those information about railway in brunei..I'm really interested to know more about it as it's my thesis topic. could u help me to email me all the information u have a.s.a.p? I really appreciate it if you could help me..
Tuesday, March 24, 2009 11:20:00 AM

Unknown said…
At least once, and certainly in 1980, the Hash House Harriers in Seria hired the railcar to take them into the jungle - and of course they ran back.
I recall the local press covered the event.
I will have to search to find a photograph.

Regarding the Brooketon line - it was stated locally that the Japanese relaid a section and used PoW labour to hand work it. I believe no useful coal was found at that time.
-------------------

There was also a railway line of sorts to assemble lengths of pipeline.
The old main road crossed it by a bridge a few miles east of Seria.
I never negotiated a visit but was told the only rail traction was a 'speeder' used for taking track maintenance gangs around.
Everything to do with handling the pipes was done by winches and wire rope.