Memories of Brunei Hostel in Singapore 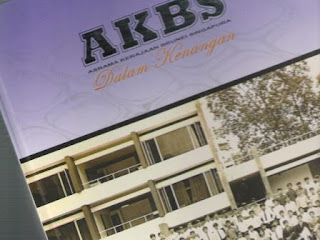 The month before we were all called to the old Education Department Building (behind the Secretariat Building, now demolished) from various schools throughout the country. At that time, Science School was still in the planning stage. We were supposedly the best 10 boys who passed the PCE (Primary Certificate of Education) that is excluding all the girls and the non-Bruneians. This was part of the government's efforts to provide better education, a policy that was laid down in the early 1950s. 'A' Level students went to UK until the late 1970s when PTE (today's Maktab Duli) was formed whereas us, pre 'O' level students went to Singapore also until the Science School was established. 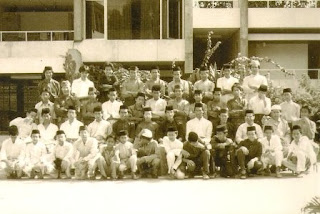 [Illustration - photo during a Hari Raya celebration if I am not mistaken around 1977 or 1978. Mr. BR is in third row second from left].

It was a different era unlike today. Going abroad was a scary experience. Living in a hostel. Home sickness and tears can only be shed in the privacy of night. Our allowance was $30 a month then. Remember too there was no mobile phone. Telephone calls were costly. Any communication would have to be by letters. Thankfully a few months before that RBA started its operation. Otherwise we would have to rely on foreign airlines. When we arrived in Singapore, we were taken to Tanglin Hill which is off Tanglin Road and a few bus stops away from Orchard Road. The hostel I remember had no name but over time AKBS (Asrama Kerajaan Brunei di Singapura) became its name. But that hostel was not the first, it was probably the third hostel that Brunei Government had used for sending students to Singapore since 1950.

Many students went to Singapore from 1950 to 1982. In those 30 odd years, many senior officials formerly studied in Singapore. Ministers and even in the ranks of today's PSs, we have our alumni at PMO, MOF, MFA, MRA, MIPR and MOD. Were we different? In some sense, yes. We went to Singapore during its formative years. We went to government schools and obviously we studied what Singaporeans studied and went through what the Singaporeans went through. I have trudged along many streets in Singapore selling flags collecting donations for charities. I have painted old homes. Some of the Brunei students were so good that sometimes whole school teams were made up of Bruneians. One was at Teluk Kurau Secondary when the goalkeeper was the only non-Bruneian. MIPR PS was so good at soccer that he was chosen to represent Singapore boys. He played for the Brunei national team for a while. (On that note, another PS have also played in the national football team - guess who?]

Anyway, memories.... Those memories are now captured in a book written by another alumni, Dr Muhammad Hadi, the deputy director at the history centre. The book full of the history of the AKBS (or rather various AKBSs), the Brunei students who studied there and what happened to those places. The book cost $50 and will probably be bought by all the ex-students. If your parents or elderly ones were formerly students in Singapore, the book would come as a a very timely Hari Raya present for them.

Al-Qadr said…
But PMO PS (my favorite Bruneian Eighties' national team's 'thinking' midfielder) didn't make it to 'good ole Singapore schoolboys network', did he, BRo? Some of your batchmates didn't really make the cut in the Civil Service but they are doing alright doing business, etc. The late AA (if you still remember) passed away in a car accident shortly after returning from the Island City schooling: Al-Fatihah.
Thursday, September 25, 2008 3:30:00 PM

thrumyeyes said…
Mr. BR, glad to be part of that history and invited to the book launching and first few to get hold of the book at a discounted price.
Sunday, September 28, 2008 1:05:00 PM

Anonymous said…
(Kaki Bukit Sec School. Graduate: 1969. Principal: J T Christie (deceased).I bet u guys didn't know that The Honourable Dato Seri Paduka Haji Kifrawi bin Dato Paduka Haji Kifli - the Attorney General was in his teen a superb HOCKEY player, I think he's the Captain of the Kaki Bukit Secondary School's hockey team, a prefect, a super genius - scorng near perfect marks for all the subjects taken, way beyond his teen age years .. with such a charming shiny smile to match his perfect personality..and he was so super adorably cute then, with a pinch quiet sense of humour!!!
In fact all the Brunei scholars were super genius (besides the abovementioned), you have, Jaffar Besar, Syed Mutalib, Satu Timbang, AK Morni, AK Abdul Rahman, AK Morni, Duraman Tuah, Zainal, Ariffin..& the list just goes on *:* .. I am actually so proud to have known & be associated with them in my lifetime. Yours humbly, their ex-classmate, Karti M Amin
Friday, November 13, 2009 9:24:00 AM

Unknown said…
Thanks for sharing this. I recently visited this site (now abandoned). It is great hearing about the history of this place. I posted an image here: http://www.iambidong.com/2011/02/urbex-sultan.html
Monday, June 06, 2011 6:03:00 PM

Anonymous said…
Sorry to ask but just curious to know,why was this place abandoned and yet to be demolished?
Thursday, September 22, 2011 2:39:00 PM

Anonymous said…
///
(Kaki Bukit Secondary School 1966-1969) I was triggered to write with a short and brief comment of our former classmates by Ms Karty and some other guy which anonymously did not mentioned his or her names. I'm sure they still remember me too I was with them for four consecutive years from Sec 1 to Sec 4. Hello to all, especially my former classmates of KBSS, actually I,m really very happy to hear and would like to share the joys of our classmates achievements in life. Hopefully, all our former classmates have achieved a wonderful life too.
I think we have a lot to talk about especially during our school days but, anyway I have left my Email address, if any of you wish to contact me please write to the below email address. Thanks.

Anonymous said…
My name is Nanda Karthigasu, the son of the late Mr. Suppiah Karthigasu. My father taught Mathematics at Kaki Bukit secondary school just about the time that many of you were there. He was a close friend of Mr. Christie as well. He mentioned that the best time of his life was when he taught at KBSS. Some of you from the class of 1966 to 1969 might be familiar with my dad and his time there as a hockey coach too. Please let me know if anybody remembers him, or has any pictures with him or of him. He just passed away on the 21st of december 2011.
My email is nanda.karthi@yahoo.com.sg