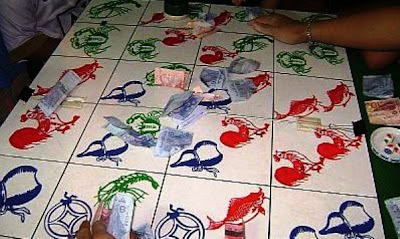 In the 1950s, Bruneians woke up to a new game of chance. This new game was different. It required a certain amount of skill and knowledge. It also appealed to the Malay sense of puzzle solving – solving a ‘teka-teki’ or word puzzle. But it was still a gambling game and it went by the name of ‘Hua Hui’.

Not many young Bruneians remember the name but those who grew up around the capital city of then Brunei Town would remember it very well. ‘Hua Hui’ was an easy game. For each draw which lasted around a week or more, a short word puzzle (known as the Ar-Chai) would be announced. The puzzle would read something like ‘… this (animal) goes out at night, and can be seen in the morning…’ A punter would have to place a bet in one of the 36 animals given and if he chose correctly he could win as much as thirty times what he had put up.

People were attracted to Hua Hui. Somehow the thinking was, this was not pure gambling. You have to think about it and therefore if you have to think about it, this game required skills and not chance alone to determine whether or not you would win it. Punters would agonise over the answer. Some would go in search of a seer who would burn papers and the remaining charred paper would be studied. What shape does it have? Does it resemble one of the 36 animals?

Those who dreamed about animals were in demand. Many punters would come and visit or ask. Dreamers have been known to sell their dreams to the highest bidders.

After the time is up, the animal would be revealed and everybody who put up the right bid would be in search of their runners to get the winnings.

‘Hua Hui’ was particularly popular in Brunei in the 1950s and 1960s. Even during ‘festive seasons’ or ‘Hari Besar’ as the Bruneians used to call them such as His Majesty’s Brithday Celebrations, ‘Hua Hui’ would make an appearance. The 36 animals would be displayed on a banner and by the end of the day, the right answer would be unfurled. Throughout the day, punters would continue to put up their bets on which animals would be right, thinking that they have solved the puzzle.

However, ‘Hua Hui’ was less a game of skill and more a game of chance. There are 36 choices and the maximum winnings are only a multiple of 30. Even if one was to put a $1 on all 36 choices, one would only get back maximum $30. At the same time, the ‘Ar-Chai’ or the puzzle is so vague that the description can match more than 1 animal and sometimes match many animals. It is highly possible that the organizers would choose the ‘right’ answer based on the winnings that they have to pay out.

However in those more ‘liberal’ days, games of chances abound. Today these games are illegal and if found guilty can be prosecuted under the ‘Common Gaming Houses Act’ (Chapter 28 of the Brunei Laws), and many punters have been known to be prosecuted.

‘Katam-katam’ board game is so easy to play and does not require expensive hardware to enjoy it. You just need a plain square table to put it on. On the board there would be 6 pictures of a red fish, a red chicken, a green prawn, a green crab, a big jar that look like the pumpkin and a moon represented by the round chinese coin look-alike. Next are of course the dices. You need three dices. If the three dies thrown during the game showed a certain configuration, it can indicate a special winning.

However just like any other game of chances, this game is no longer allowed in the open and if discovered, would lead to very heavy fines and imprisonment.

Other games of chances abound in Brunei during those days. This included the dart throwing competition. Punters would put up their bets on the appropriate numbers hoping that the dart would land on that number. Then the dealer would throw a dart at a revolving board and if he hits a number then the punter who bet on that number would get a prize.

Another similar game is the throwing a small hoop around a can which holds or place on top of it, prizes such as a watch etc. Even though there is a certain amount of dexterity skills required to throw the hoop accurately, the stall owners normally would try to make sure that getting the hoops in not an easy task.

Another variation would be to throw balls at cans and if all the cans fall down, one would get a prize. In many cases, the cans have been weighed down by sand stuffed into them. They don’t topple over easily.

Even during weddings in Brunei during those days, card games were very popular. Many a wedding guest have been known to come out of a wedding cleaned out of his hard earned cash by other punters. The popular ones are the Pakau or better known as the Black Jack and Bandar or the three card game.

This practice of having card games during weddings surprisingly is not country wide. This mostly occurred in the Brunei-Muara District. Guests from the other districts have been known to be wide eyed when they saw the card games played at weddings.

Though it is very surprising how gaming catch on very quickly in those days. It must have started at school. In school tuck shops, there was always a small board where on the box would be placed small pieces of paper. A pupil would pay 5 cents to get at one of those pieces of paper.

If open, the pieces of paper would show various prizes or no prizes at all. One would be happy to win a 50 cent coin which is not a bad investment for 5 cents. In those days too, a pupil would carry at most 5 or 10 cent coins. This would be tied to the end of a handkerchief so that the small coin will not be lost.

Another game sold by school tuck shop owners is one where a student would dream of winning. The shop will sell small cigarette size boxes, if shaken, feels as if there is a coin in it. The boxes normally contain small plastic toys such as tops and probably one or two would actually contain the coins.

Gambling whether small or big continues to be haram. Gambling is considered a crime in Islam, and any financial gain obtained from it is haram and cannot be used. This is especially so in terms of purchasing food or drinks for one’s family. Items that are purchased using haram money or gains are also considered haram, and those who consume it will be punished. This was highlighted during a Friday sermon sometime last year.

Fortunately for us in Brunei, the Hua Hui and the other variations are no longer with us. Most of us have realized that these games are haram and for us, these games remain a curiosity of our history.

I am doing researches about hua hui, and I wondered if you had any data about the list of names, or the pictures used in Brunei for playing hua hui...
You can see what I have already found on my website (http://perso.numericable.fr/cheefah).
It is still under construction...
thanks...
Tuesday, September 28, 2010 8:57:00 PM