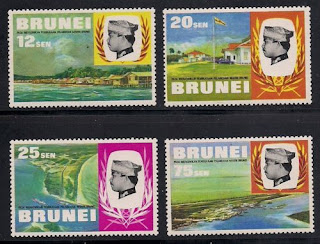 I was really surprised to see this set of stamps. This set of stamps was supposed to be released in 1970 but it was never released. The stamps were supposed to have been destroyed but I guess with these sets in the market, someone somewhere decided not to destroy every single one.

I came across this set sometime early this year when my dealer in Singapore showed the whole set and I paid around S$800 for the entire four stamps. When I told one of my friends in Brunei who specialised in antiques, he said I overpaid for it. It's difficult to estimate what the value is as these stamps do not come up for auctions that often.

When I saw it on ebay, I was surprised and put up a bid for it. I was the highest at one stage but towards the end, there were just too many bidders, serious ones too. When the dust cleared, the stamps were sold for US$935 which is even way way what I paid for. Whoever bought it, congratulations, I do hope no more of these stamps will appear suddenly any more.