Which is correct? Brunei or Berunai?

Nazri brought up an interesting point. When did 'Brunei' became Brunei?

I will ignore the old Chinese reports which used various names such as Poli and Poni and concentrates on the word closer in sound to Brunei. Though the final word that the Chinese used was 'Boni' which in fact until today is still being used as the signage at Sultan Majid Hassan's tomb in China. This is the cover of my second book currently on sale which shows the sign of King of Boni:- 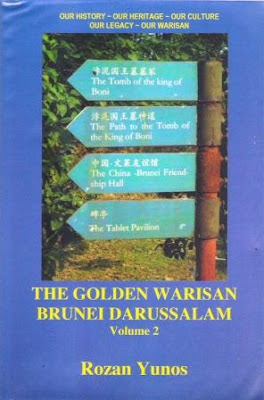 Going back further in time, most of the Dutch and Spanish documents spelt Brunei as 'Borney' or 'Borneo'. One letter from the Sultan of Brunei to Governor Tello in Manila reported the use of 'Burney'.

Most European old maps dating to the 17th and 18th century would refer to Brunei as Borneo Proper while the island is also called Borneo. One Portuguese report in 1610 used the word 'Borneu' and another in 1524 wrote of 'Burneo'. In another book written by Masimilian of Transyvania wrote of the the 'island of Porne'. Pigafetta, travelling with Magelan used 'Burney' but also Burne. A book published in Venetia in 1550 spelt Bornei.

However the use of Brunei became more apparent in the later 19th and early 20th centyury, In practically all the agreements that we signed in the 19th century, Brunei was written in Jawi and only when we anglicised it, it became Brunei.

I have an old book written by someone called Treacher. It was printed in 1891 and the title of the book was Sketches of Brunai, Labuan, Sarawak and North Borneo. He was a former governor of Labuan and obviously knew Brunei very well. His spelling of Brunai was probably 'accurate' compared to Brunei which we used today.

Another book which I owned is written by Frank Maryatt who in his book entitled Borneo and the Indian Archipelago published in 1848 spelt Brunei as Bruni.

By 1904 when McArthur came to Brunei, he used Brunei throughout his report. It is most likely that it was the British that finalised the word Brunei as Brunei of today.

Peter Blundell writing in his book 'A City of Many Waters' published in 1923 but writing about Brunei at the end of the 19th century wrote about 'Brunei'.

Though interestingly enough, there were books published in the 1950s and 1960s which tried to spell Brunei as it is sounded. One in particular was written by Yura Halim and Jamil Umar published in 1958 entitled 'Sejarah Berunai' which spelt Brunei as Berunai. In fact, in the book there is a foreword by Sultan Haji Omar Ali who used the word Berunai throughout the foreword and signed it with Sultan of Berunai.

Again interestingly enough Yura Halim in an earlier book written in 1951 spelt Brunei as Brunei and Sultan Omar Ali who also wrote the foreword wrote as Sultan Brunei. But by the 1960s, Brunei was well on its way to being established as 'Brunei'.

PS. I have decided to do a proper research and expand this entry into a proper article. I have submitted it to my editors and this will be published hopefully tomorrow in the Brunei Times Sunday edition.

I am an avid reader of all your articles. I've seen you mention your books a few time and I was wondering where I could get a hold of your books.
Wednesday, September 05, 2012 4:31:00 AM