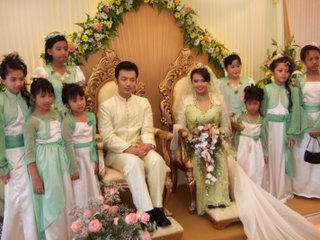 Someone asked what is the origin of the bunga telur - the token gift that is given to guests who come to wedding ceremonies. The giving of bunga telur was actually originally a throwback to the Hindu culture which influenced the cultures in Southeast Asia. The egg represent or symbolise a fertile union between the couple as the egg is the symbol of fertility. In some sense, by giving away eggs, it was hoped that the newly wed couple will also be blessed with fertility and thus have their own children in the future.

In the beginning, the boiled eggs would be given out as gifts without any other gifts. Slowly it evolved for the practise of giving the eggs wrapped in paper and then that evolved to placing the eggs in small egg baskets or holders - and hence became known as bunga telur. The eggs were even given wrapped in handkerchiefs and the handkerchiefs became the bunga telur. Over time, the baskets or the holders for the eggs became more elaborate. I remembered in the late 1970s and early 1980s receiving the eggs in tiny porcelain swans, glasses and even in crystal holders.

As time passes, the gifts got more elaborate still. At the same time people over time do not give out the eggs anymore. This is probably due to a number of factors. I can only speculate that one of them could be that the guest numbers for Brunei weddings had increased. It was quite cumbersome boiling some 1,000+ eggs for wedding ceremonies. I remembered because we did it for my brother's wedding - a number of eggs got broken and we had to boil more to compensate for the broken ones.

However, nowadays even though eggs are no longer given out but the practise of giving bunga telur remained but there is no egg or eggholder anymore just the gifts. Today's bunga telur has moved away from anything that resemble holders for eggs - they can be anything from prayer mats to yassins and from luxury soaps to expensive biscuits to silver trays. The more common ones are mugs, cups, glass or plastic bowls and candle holders. Some unusual ones I have come across are wall clocks and ringkat (the tiffin carrier). The costs of these varies from a dollar each to lots of dollars each depending on the financial capability of the hosts. But even a dollar each bunga telur with 500 guests mean that it still cost $500.

Surprisingly at Indian weddings, it is not eggs that are given out but those guests at an Indian wedding will receive sweets reflecting and reaffirming the sweetness of the occasion. However there are many similarities that still remained between the Malay and Indian ceremonies. Among these included mandi lulur or mandi belulut as Bruneians call it - where a special bath scrub was applied to the bodies of the brides and grooms.

Majlis berinai or berpacar is another similarity which is called the Mehndi Ceremony in an Indian wedding. Originally the application of the colourful henna or pachar as we Bruneians called them was supposed to ward off evil spirits as the colours are supposed to scare off those spirits. But in Brunei Malay weddings, it is just a tradition to be followed suit as all wedding couples have pachars to indicate that they have undergone a wedding ceremony. In fact the pachar design can be more elaborate nowadays than the traditional moon crescent, star shaped of the old days.

Another similarity is the Majlis Berbedak where guests and family members blessed the couple by mencalit or putting coloured and scented powder and sprinkling pandan potpurri on the bride and groom's hands. This is also reminiscent of the Mandapa at Indian weddings.

However Brunei Malay weddings now have other additional ceremonies which include cake cutting, sarung cincin (giving jewelleries) etc are also adopted from other cultures. Some wedding custom adoptions depend on the districts and the origin of the couples such as the basuh kaki ceremony or the makan tamuan. Most of us do not realise the origins of some of these traditions which we followed from time immemorial.

Anonymous said…
Mr BR can you research pasal adat bebasuh kaki for org tutong. I heard old folks told there was an event occured years ago at kg. panchur papan where a bride was kidnap by harimau jelmaan. Since then ada bebasuh kaki was adapted in marriage ceramonies.
Tuesday, December 26, 2006 8:57:00 AM

Anonymous said…
The tradition of giving bunga telor has indeed evolved over the past decade. Gone were the days of actual eggs been given away. I'd think that nowadays host families are giving away souvenirs as a token of appreciation and gratitute. From my experience of having weddings within the family, we would try to give something that people would use, rather than something that would end up in display cabinets or worse still thrown away or put into storage.

Many of the things that we do for weddings are originated from the Indian culture. Therefore it is important that we do not closely follow the cultures as they may be seen as 'deviant'. For examples, grooms are not to be 'henna'-ed (or berpacar). Also, bersanding is actually frown up. These things were 'adat', but now 'adat sudah menjadi ibadat' (translate it if you can!). We have be to aware too as not to cause unnecessary wastage.

Weddings are encouraged in Islam, but wastage and deviations from Islamic teachings are not.
Tuesday, December 26, 2006 9:17:00 AM

Anonymous said…
Quoting anonymous's statement: "Weddings are encouraged in Islam, but wastage and deviations from Islamic teachings are not."

Would like to add on a bit on the topic of Tutong's "adat bebasuh kaki". My late grandparents used to tell us that it is a symbolic ritual of "cleansing" the bride & groom's feet prior to "entering" the marital house.

In the old days, newlyweds were always asked to remain at home for a few days or more after their wedding day ("darah manis", as the elders would say) and hence the need to "cleanse" their feet before staying put at home. I thought the logic behind the "basuh kaki" was acceptable bearing in mind that in the old days, people were probably bare-footed. And I believe there is also a symbolic meaning to the "parang & pengasah" placed underneath the couple's feet during the "basuh kaki" to represent "husband & wife".

Usually, families of both bride & groom would take turns to "wash" the couple's feet and present material or monetary gifts to the newlyweds. In the not-so-distant past, this would merit as a fun event & families of the couple look forward to "tease" the newlyweds with ice-cold water & such. I remember classic household items like "lesung batu" & "paspan" presented as wedding gifts.

Whatever "real" story it is behind this wonderful tradition, it is a tradition that is quite unique and something that I am proud of because it is part of what defines us as a culture-rich community.
Tuesday, December 26, 2006 10:08:00 PM