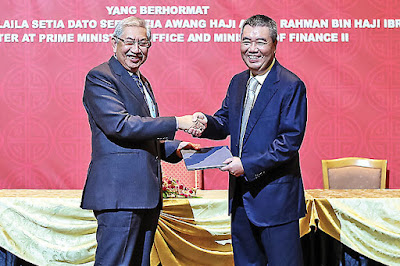 During the signing ceremony Hengyi also announced its Final Investment Decision (FID) of US$3.445 billion for the development of the refinery and petrochemical complex.

The project is expected to be completed in 2019.

The signing took place at the Empire Hotel & Country Club between EIDPMO as regulator, BEDB as facilitator and Hengyi as project proponent.

The Implementation Agreement outlines, among others, the execution requirements of the project including Hengyi’s obligations in terms of employment and business opportunities to the country and its people. It also highlights Hengyi’s obligation on health, safety and environment (HSE) requirements for the protection of its employees, contractors and the community.

Signing the agreement on behalf of the EIDPMO was Dato Paduka Awang Haji Jamain bin Haji Julaihi, Permanent Secretary (Energy) at the Prime Minister’s Office, while signing on behalf of BEDB was its Chairman Dato Paduka Dr Awang Haji Mohd Amin Liew bin Abdullah, the Deputy Minister of Finance and signing for Hengyi Industries was its CEO Chen Lian Cai. The guest of honour and the Chairman of Hengyi Industries Qiu Jian Lin witnessed the signing.

Announcing the Final Investment Decision, the Chairman of Hengyi Industries said, “In addition to the signing of the Implementation Agreement, on behalf of Hengyi Group and our shareholders Damai Holdings Limited, I would like to officially announce our Final Investment Decision of US$3.445 billion for the development of Hengyi’s refinery and petrochemical complex at Pulau Muara Besar.”

He said that this significant milestone demonstrates Hengyi’s commitment to contribute to Brunei Darussalam’s economic development in line with Vision 2035 by developing the downstream segment of the oil and gas industry.

“Hengyi aims to create value and opportunities by complying with the local business development element. We are grateful to the government of Brunei and our stakeholders for their relentless support and we look forward to continue working closely with the government to ensure the project’s smooth implementation.”

Meanwhile, in his welcoming remarks, Chen Lian Cai said, “Hengyi’s Oil Refinery and Aromatics Complex is currently one of the most significant development projects in the area of economics and trade between China and Brunei.”

“Hengyi’s Oil Refinery and Aromatics Complex will ensure self-sufficiency of refined products as well as help highlight Brunei’s growing potential as a destination for value-added processing,” said the CEO.

The Implementation Agreement is “a binding agreement that further symbolises Hengyi’s unequivocal commitment to participate in the economic and social development of Brunei,” he added.

He highlighted that the agreement, among others, outlines Hengyi’s obligation to provide employment and business opportunities to Bruneians as well as a transparent tender and procurement process.

“It outlines our uncompromising pledge to the health and safety of our people and facilities, our assurance to preserving the environment and establishing a corporate social responsibility policy that will benefit local communities in the country.

“Hengyi’s project will not only generate economic spin-offs, employment opportunities and ensure local skill set development, but will also place Brunei on the map as one of the key players in the petrochemical landscape in our region.

“Hengyi will pledge to comply with regulatory as well as technical requirements to ensure that our plant and facilities are constructed, operated and managed according to local and international standards,” he added.

In a video presentation at the event, it was stated that the target for the project’s completion is 2019.