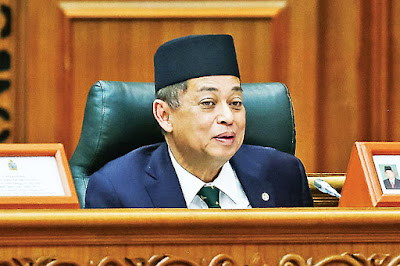 The decline is partly due to the natural dwindling of resources, suspension and deferment of production and the country’s commitment to the Organization of the Petroleum Exporting Countries (OPEC), he said in his preamble speech before discussing the budget under his ministry, on the third day of the 13th Legislative Council (LegCo) session.

In 2016, the oil and gas sector managed to increase the total resources and reserves by 94 million barrel of oil equivalent (BOE), expanding the lifespan of oil and gas reserves to 53 years, the minister said.

“The main role of the energy sector is to ensure that the hydrocarbon treasures of the nation are developed sustainably.”

Regarding the renewable energy sources, the minister revealed that a large-scale solar project will be launched in the Temburong District to replace power generators that operate on diesel at the Belingus Power Station in Temburong. The project will be completed in the first quarter of 2018 and will see an energy saving of 23 per cent in the first phase.

Touching on electricity, the minister said several initiatives have been undertaken to improve its reliability, reducing electricity interruptions by 67 per cent since 2010.

Since the introduction of the housing tariff reforms in 2011, energy consumption has decreased by 12 per cent. Electricity saving practices also continued where government buildings have achieved savings of B$16 million a year. Electricity dues have also decreased by 13 per cent since November 2015.

The minister also said that the Department of Electrical Services (DES) is planning to privatise the generation and transmission sector through the transfer of assets to Darussalam Assets. minister said that governing of the cooperatives has become less effective, adding that only 69 out of the 161 cooperatives under the ministry are still active, while the rest remains inactive but still has members who hold share capital.

In 2017, the government will focus on improving the governance of cooperatives and developing them to become competitive at the international level. It plans to do so by introducing a Code of Practice, holding financial health clinics and training programmes on basic skills beginning March 2017 as well as encouraging cooperatives to engage in export-oriented industries such as stingless bee keeping and aquaculture.

To address the development of micro SMEs, DARe (Darussalam Enterprise) has conducted several capacity building programmes for entre-preneurs through the Industry Business Academy (IBA), the Start-up Bootcamp and the Microcredit Financing Scheme since October 2016.

According to the minister, in 2017, the focus will be to strengthen the ecosystem of micro SMEs as detailed by YB Pehin Orang Kaya Laila Setia Dato Seri Setia Awang Haji Abdul Rahman bin Haji Ibrahim, Minister at the Prime Minister’s Office and Minister of Finance II, in his budget speech on Tuesday.

Speaking on the e-Government National Centre (eGNC), the minister said it also has improved services and common government infrastructure whereby the use of the One Government Network (OGN) has cut spending by 33.6 per cent and the One Government Private Cloud service has cut costs by up to 42.38 per cent.

At the same time, efforts are being made for capacity building of the local Information and Communications Technology (ICT) industry. The Local Business Development (LBD) policy which came into force on March 1 is expected to generate at least 25 IT projects each year. The LBD has seen an improvement in the oil and gas sector where local content expenditure has increased by 40 per cent from 2010 to 2016 since the issuance of directives on Local Business I and II.

On employment opportunities, the minister said that so far, 12,966 jobseekers are registered with the JobCentre Brunei system. Of this, 1,562 job-seeking graduates will be assisted through the I-RDY Apprenticeship Programme, while the rest will be absorbed through the Start-up Bootcamp to venture into entrepreneurship.