November 09, 2010
Greetings from Bangkok. I am here to lead the Brunei's delegation to the 22nd Meeting of the Parties to the Montreal Protocol on Substances that Deplete the Ozone Layer. The meeting is held at the United Nations Building in Bangkok from 8th to 12th November 2010. 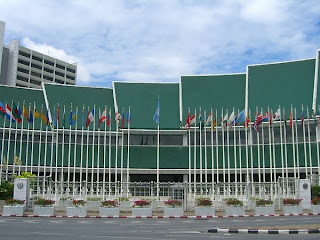 Yesterday was the first day of the meeting. The first three days are the preparatory meeting at senior officials level and the last two days will be the high level or ministerial level meeting.

What is the Montreal Protocol and what does it do to us in Brunei?

The Montreal Protocol is an international treaty designed to protect the ozone layer by phasing out the production of numerous substances believed to be responsible for ozone depletion. It is believed that if the international agreement is adhered to, the ozone layer is expected to recover by 2050. This is probably one of the best example of international cooperation. More than 196 countries have ratified it. It helps everyone in the world including all of us in Brunei and our future generation by saving the ozone layer.

What is the 22nd Meeting all about?

Since the Montreal Protocol came into effect, the atmospheric concentrations of the most important chlorofluorocarbons and related chlorinated hydrocarbons have either leveled off or decreased.

Unfortunately, HCFCs, and hydrofluorocarbons (HFCs), are now thought to contribute to anthropogenic global warming. On a molecule-for-molecule basis, these compounds are up to 10,000 times more potent greenhouse gases than carbon dioxide. The Montreal Protocol currently calls for a complete phase-out of HCFCs by 2030, but does not place any restriction on HFCs.

Since the CFCs themselves are equally powerful as greenhouse gases, the mere substitution of HFCs for CFCs does not significantly increase the rate of anthropogenic global warming, but over time a steady increase in their use could increase the danger that human activity will change the climate.

If you are able to go through those technical CFCs, HCFCs and the HFCs, well done. So the argument in the meeting now is should the Montreal Protocol now control HFCs as well? The meeting was divided yesterday, some arguing that HFCs are not ODS, we should not discuss it in this forum but to discuss it in the Climate Change forum. Some argued that since the Climate Change froum since Copenhagen last year did not get anywhere, we should discuss it in the Montreal forum. The argument over the next four days will be along this line.

The fact we are discussing it, already shows we are now at the crossroads. I do hope the world finds which lane to go for. One delegation cannot change this but the whole world can.

Faiq said…
I pray and hope Brunei will be able to play a big role in preventing further detriment of our ozone layer!!
Monday, November 15, 2010 5:19:00 AM