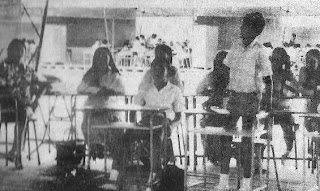 Students of today had no idea what kind of classrooms we had to endure in the 1970s. Today almost every school had fantastic looking sports facilities and brand new school blocks.

In the 1970s, we had to endure open classroom out in the SOAS fields. The Brunei Preparatory School in Bandar Seri Begawan only had walls separating the classes but no walls on either side. When anyone walks past, you can see the students. Even the staff room had no walls either. When it rains heavily and especially with the winds, one side always had to move in to avoid the rain.

I did not go to BPS in Bandar but I managed to use the classrooms for my ugama classes. At that time only the Madrasah had ugama sessions in the morning but Madrasah was so full that a number of us were transferred to Ugama school at BPS HQ as we used to call it. It was an interesting mix.