Echoes from the Minaret

April 12, 2010
Sometime in October 1968, if you have been a regular reader of Borneo Bullein, you would have come aross this page 19. An interesting page as it listed all the movies playing in the cinemas in Brunei Town then:-


Interesting movies. There are even auctions and lucky draw numbers etc. But look closely to the movie on the top right hand of the page... It's an advertisement for the first and one and only movie ever produced by our own local production.

The movie is called Gema Dari Menara and the making of it is sponsored by the Religious Affairs Department (now the Ministry of Religious Affairs). From the various sms text notes I received yesterday regarding this movie and from whatever I could get from the Internet, this is what I was able to piece out, and one caveat, I am unable to substantiate the correctness of all the information and so subject to corrections:- 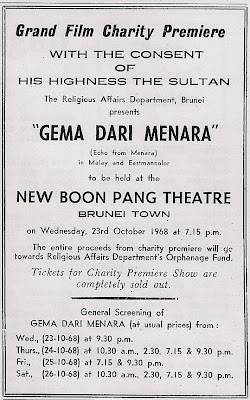 The movie was filmed on location at the house of YAM Pengiran Indera Mahkota, now the Speaker of the Legislative Council. Outside scenes include filming at Jembatan Rangas, Jerudong and Batu Satu. The actor was Pengiran Abbas. The actress was a Malaysian by the name of Zeera Agus (apparently on that Borneo Bulletin page, her name appeared in one of the other movies shown at Capitol). Another actor was Pengiran Rosman. A local band by the name of Dendang Teruna appeared in the movie. Dendang Teruna was a regular on Radio Brunei but apparently never recorded an album. (updated 13 April 2010 - YAM Pengiran Indera Mahkota also directed the movie. The movie was funded by the Government by several hundred thousand dollars. The actress was a local by the name of Aisah Haji Md Noor.) 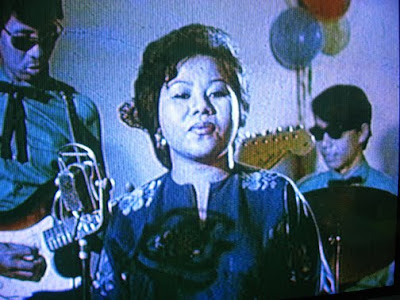 Dendang Teruna in one of the scenes.

The script was written by Haji Md Zain (now Pehin Minister of Religious Affairs). The storyline was that of a young man who did all the bad things like partying, drinking etc and he repented after a car crash.

The movie was shown at Boon Pang Cinema and after it ended there, the movie was shown from time to time at one of Information Department's nightly showings in their visits to villages. Not many people remember what happened to this movie. (updated 13 April 2010 - the movie was said to be controversial as too many people either enjoyed or disliked the 'sinful' sins especially scenes which only had the actor and actress; and because of that it was withdrawn. Despite the fact that the acting was not as good, tickets were said to be sold out and some of the collection was donated to the Orphans Fund.)

Note 1: Despite a few sms text notes which mentioned one of Brunei's businessman - let me clarify that to the contrary, Mr. Bawai did not appear in this movie. He was in another movie where he was seen walking down the stairs of a plane wearing a white coat. That was his one and only scene in that movie by the way. Though the media coverage was unusually widespread making everyone think that he was a major player in the movie.

Note 2: One Philippine blogger by the name of Mervin Espina has been very active and has taken an interest in the movie. All the internet notes are taken from his site. Another one is Radiofussion International which has written much about Brunei records in the 1960s.

Unknown said…
Salam sir, I am a UBD student and we learned about Brunei film. I just found out that this is our very first Brunei film and I am interested to find out more about it. do you perhaps know, why it was called as Gema dari Menara? Thank you in advanced :)
Friday, September 08, 2017 2:38:00 PM