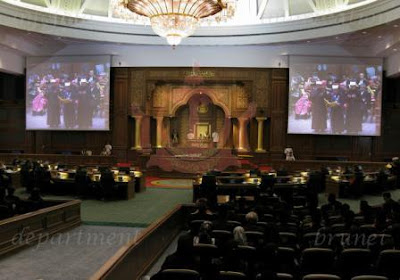 The budget for financial year 2009/2010 was finally approved yesterday. That means the Supply Act is finally law and the government can go on ahead for another year. Budgets are usualy approved in most countries in the same way, debates and then approved. But there has been a few ocassions when budgets are not approved and chaos reigned.

I remembered reading last month when California's lawmakers were still quarelling about the their state's budgets. This is what happened if the budget has not been approved on time: "Refunds to taxpayers were delayed, payments to state vendors stopped, state workers were ordered to take unpaid days off and the Schwarzenegger administration began sending layoff notices that would have affected some 10,000 state workers. Thousands of public works projects ground to a halt, putting tens of thousands of construction workers out of a job. Hours after the budget package was approved, the state Department of Finance announced that work on 276 road, school and other projects would continue. It was scheduled to stop if a budget was not in place by Thursday." Not approving a budget is a big problem.

In Brunei, we probably can go on not like that in California. But then technically the budget would have been 'illegal' if it had not received the State Legislative Council's blessings. The Leg Co approved a budget of $4,985,785,600 for fiscal year 2009/2010 which is made up of all the government needs to run the government including spending on development expenditure.

But the total budget is much higher than this. What was not discussed is what is termed as the charged expenditure. Charged expenditures are expenditures which are needed to run the government and other necessary expenditures. By tradition, these are not discussed. These included the civil list, payment for pensions including old age, government pensions, gratutities (baksis) etc, the public service commission, the auditor general, the judges and the state council itself. I was looking at an old budget of 1960s, then even the payment for the British High Commissioner is included and prior to 1959, it was payment for the British Resident. If we have an election commission then this amount would also be included under charged expenditure.

What happens once the budget has been approved and the money allocated is not sufficient? In this case, the government has to come back to the Legislative Council and asked to pass additional supply bills. Generally the Finance Ministry would try not to do that. If additional money is needed by a government ministry for a particular project, normally the process is to vire (transfer) surplus allocation from another project or another expenditure within that ministry to that project. If this is insufficient, the Finance Ministry would try to cover the shortfall from its own funds as it has funds for emergency need or other needs. Or the project gets completed as much as it can within the budget and wait for the next year for it to be completed with additional funding.

Many said this is causing a lot of red tapes and unnecessary delays. Yes, it is. However it is a necessary evil. At the same time had the department or ministry allocated its budget properly or work out a more accurate costing, then this would not have happened. Of course in most courses, the amount allocated was insufficient anyway. When I was at MOF, we could not allocate everyone what they wanted, otherwise the whole budget would go flying outside the window. For instance this year, other than Defence and my own Development Ministry, everyone's requests were way above the allocations. We know the government gets a certain amount of revenues, then the expenditure would have to follow that. Controls unfortunately are necessary.

In most cases, the Ministries concerned are all able to find additional money within their budgets. Every year roughly only around 70% of salaries are used up (vacancies, retiring reduces the total salary expenditure), all the annual recurrent (administrative costs) would be used up, about 90% of the special expenditures (small projects) would be used up and for development expenditures, it can be as low as below 50% usage.