January 14, 2009
[Note: This was published last Sunday in Brunei Times. I wrote this as a two part, the first part published the week earlier was about Sultan Tengah. This article is about his descendants establishing the Sambas Sultanate which lasted till today. But the Japanese massacre of Malay people in Kalimantan during the Second World War decimated many family members. I have not been paying much attention to Indonesian history but when researching for this article, there is much to learn.] 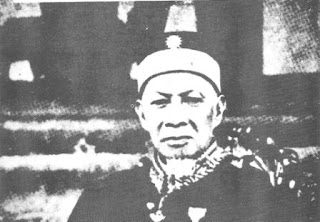 After the marriage, Sultan Tengah requested from his father in law that he be allowed to leave for the Sambas River so that he can continue his mission to spread Islam in the area. Sultan Tengah arrived in Kota Lama and met Ratu Sepudak. Ratu Sepudak was from the line of the Majapahit Governors of Sambas.

Sultan Tengah was allowed to carry out his propagation work without any resistance from Ratu Sepudak. He stayed there for a while and married his eldest son Radin Sulaiman to Ratu Sepudak's princess Puteri Mas Ayu Bongsu. Sultan Tengah left later on for Matan and eventually died in Sarawak.

Meanwhile, his son, Radin Sulaiman carried out his father's work and converted many of Kota Lama's residents to Islam. However there were a number of people who were against Radin Sulaiman’s mission including the successor to Ratu Sepudak, Ratu Anum Mangkurat.

In Sambas, Radin Sulaiman was crowned as the first Sultan of Sambas, Sultan Muhammad Safiuddin I in 1584. Before he was coronated, he sent a message to his uncle, Sultan Abdul Jalilul Akbar in Brunei that he wanted to use the title Sultan. His uncle granted him to use the title on the condition that every time before the coronation of his descendants, they must come to Brunei. Sultan Muhammad Safiuddin I started the Sambas Sultanate lineage.

When he died in 1669, his son, Radin Bima became Sultan Muhammad Tajuddin. Like his father, he also went to Brunei to receive his blessings from the Sultan. The Sultan reigning in Brunei was Sultan Muhyiddin. Sultan Muhammd Tajuddin died in 1708.

His son, Radin Maliau, became the third Sultan and took the name Sultan Omar Aqamaddin I. He too continued with his predecessors’ work to spread Islam. He was known as Sultan Adil (the Just Sultan). He died in 1732.

One of his sons, Radin Bongsu became the next Sultan, Sultan Abu Bakar Kamaluddin. He died in 1762. He was then succeeded by his son, Radin Jama who became Sultan Omar Aqamaddin II.

It was during the reign of Sultan Omar Aqamaddin that Sambas prospered. A goldmine was opened and brought a lot of revenues to the government. Sultan Omar Aqamaddin II stepped down from the throne voluntarily in 1786 and his eldest son, Radin Gayong became Sultan taking the name Sultan Muda Ahmad Tajuddin. He died in 1793 without an heir.

Pengiran Anum under the orders of his brother, Sultan Abu Bakar Tajuddin I attacked Banjarmasin to avenge the death of an Islamic scholar. On his return, he also met a British Warship entering Sambas and he battled that ship too. In 1799, Siak-Inderapura came to attack Sambas because their application to open a gold mine was refused by Sultan Sambas. Pengiran Anum led the Sambas Army to defeat the Siak-Inderapura army.

While visiting Brunei around 1812, a British navy attacked Sambas. He returned back but the British negotiated for a truce. Until then, Sambas remained independent.

With the coming of the East India Company, the capital went through that bombardment in 1812. The Dutch remained interested in the state and often interfered with succession and was implicated in the deposition and exiling to Java of Sultan Abu Bakar Tajuddin II.

Pengiran Anum became Sultan Muhammad Ali Safiuddin I when his brother Sultan Abu Bakar Tajuddin I died in 1814. He made peace with the Dutch in 1819.

The next in line was his brother, Radin Osman who became Sultan Osman Kamaludin in 1828 but he too did not rule for long. He was succeeded by his brother when he died in 1832. His brother, Radin Samar was known as Sultan Omar Aqamaddin III.

In Sambas History, Sultan Muhammad Safiuddin II was the longest reigning Sultan. During his reign, he improved the infrastructure of the state while at the same time carrying out his mission to continue to spread Islam. He stepped down from the throne in 1922 and he was succeeded by his prince, Radin Muhammad Aria Diningrat who became known as Sultan Muhammad Ali Safiuddin II. He died in 1924 and two years later his father also died.

During his rule, the Japanese invaded West Kalimantan. Sultan Muhammad Ibrahim Safiuddin was executed at Mandor in 1944. The Sultanate was thereafter suspended and replaced by a Japanese ruling council, only being restored with the return of the Dutch after the War.

Today, Sambas is a regency in the Province of West Kalimantan, Republic of Indonesia.
golden legacy history