February 17, 2007
In the 1960s and 1970s I remembered going to the padang in Muara watching movies being played there. There will be lots and lots of people there – all watching black and white movies. I don’t think the movies were in colour then. I remembered my dad used to own one of those home movie projectors and every time we stayed at my auntie’s place in Seria, he would play one of those silent movies and there would be lots of people watching it. It was unbelievable. Dad used to be one of the first to own a home movie equipment and we would get to see ourselves on screen after he has sent off the film for processing somewhere in the world. Today, in the days of 50 inch plasma television with multi media multi surround home movie equipment, those days were almost unthinkable. Though ironically, despite our new found wealth – we still buy $5 pirated DVD. But today’s topic is not about $5 pirated DVDs but rather on the growth of cinemas in Brunei. 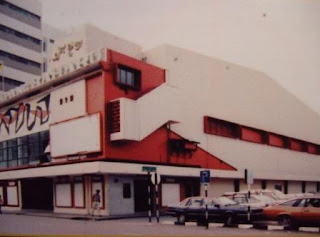 For some reason, cinemas never found a strong foothold in Brunei. Before the first world war, there was one cinema but it was destroyed during the war. It was rebuilt as the Boon Pang and later on in Bandar, we had three - the Boon Pang, the Bolkiah and the Borneo, the latter two built in the 1950s. The Boon Pang is now gone replaced by the BIBD building. The Boon Pang had an interesting history. It was once used as a detention centre for a few months. After the 1962 rebellion, the army rounded up all the detainees and placed them in the open tennis court areas at the padang. The Police Station in front of the mosque was still there then. The detainees were eventually removed to the Boon Pang to keep them from being out in the open and while preparing the teacher training institute in Berakas as a detention centre for long term placements. 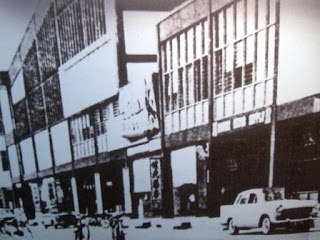 Other than the Boon Pang, the Borneo and Bolkiah are still there though I have never been inside either one. So I don’t know what the places look like. I don’t even know what movies are currently being shown there. The Bolkiah I have been told has been upgraded and one should go there at least to find out the better experience of watching a movie in a full size cinema unlike the miniscule ones in the Empire or the Mall. The Empire’s and the Mall’s multiplexes are today’s in-thing. We no longer have huge cinemas but small ones catering to smaller crowds. Though on a good day, these multiplexes would play the same movie spanning across three or four cinemas. 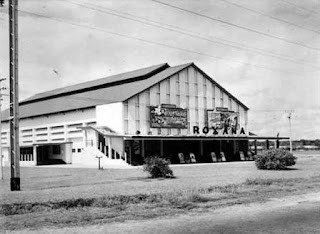 I thought there was an old cinema in Tutong but I could be wrong. I know in KB, there is the Marina and the Roxana. The Roxana has been razed down. If I am not mistaken the Marina is still standing but whether it is still functioning that’s another matter. Maybe someone from Belait can elighten me. The OGDC is now being used as a cinema which is good as at least people from Belait has someplace to watch.

Back to Brunei, I have been told that the Q-Lap Mall would have its own Cineplex. That would be good. More competition.
cinemas history

Anonymous said…
Popcorns are now the craze for movie goers to munch while watching the silver screenings. I remember in the good old days, the 'boiled peanuts' and "kacang putit" were the rage, particularly behind the Boon Pang cinema where peddlars on tricycles used to sell them.
Saturday, February 17, 2007 1:00:00 PM

Anonymous said…
My dad wanted to 're-live' the cinema in Seria town that is now used by druggies but the government does not approve of it. Such a pity.
Saturday, February 17, 2007 1:40:00 PM

Anonymous said…
There were 3 cinemas in Seria and one in KB. Seria ones were Marina, Roxana and Puspa. Can't remeber the KB's name. Marina is now a run down building in the centre of the town. Just waiting for a minister to drive by and comment before anything get done. A simple solution needing such a high level intervention is ...
Saturday, February 17, 2007 9:28:00 PM

Anonymous said…
There was a cinema in Tutong back then....it was located near the present Chung Hwa Tutong school, opposite the Pekan Tutong Police Station......
Saturday, February 17, 2007 10:16:00 PM

Brunei Foodies said…
You missed one more in cinema in Bandar, the one in Batu Satu. It is now an empty spot next to the post office. I guess I'm lucky(?) that I have actually been to all of the old & gone cinemas mentioned here, even those in KB & Seria ;)
Sunday, February 18, 2007 3:06:00 AM

Anonymous said…
Roxana had been closed eversince i could remember and Marina is still standing but had not been used for quite long time. The last movie played was one of those sembilu, if im not mistaken. Not much of a hygienic place to go as there are alots of complaints with the unfriendly rats. I missed going to Marina. Those were my younger days =) im a movie goer, but guess age had led me to play less n work more.
Monday, February 19, 2007 9:55:00 AM

Anonymous said…
There's another one in BSB. The Seri Theatre in Batu 1, in front of where 1st Metro still stands.

Anonymous said…
this is an interesting post!! i didn't know brunei had so many cinemas b4.. all i know is Marina, borneo, and Bolkiah. Boon Pang at BIBD area? boon pang is such a chinese name... i think BIBD is at jalan Ong Sum Ping. was that area a chinese area b4?
Friday, February 29, 2008 6:07:00 PM

Unknown said…
Hello,
My father used to be a manager at the old Roxana movie theatre. I remebered growing up in Seria how much fun it was to go to the Roxana with my family. We got in for free and sat in our special row. My dad loved old western and we watched alot of it. I moved away to Canada in 1971 when I was 8. Someday I wish to go back to Seria and visit St Margaret school too.
Thursday, March 24, 2011 12:01:00 PM

dsds said…
Great post. I think it is good for visitors. I like this kind of website where has a lot of real information, It proved to be very helpful. Thanks for admin, His creativity, Presentation, Information and all is good.
home movie theater