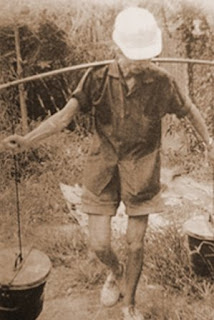 Do you know what this guy does for a living?

He does not know do it anymore. His trade died out in the 1960s. But when he was doing his trade, he did not have much competition or any competition. Nobody else wanted his job. But if he did not do his job, the whole Brunei Town would suffer. That's how important his job was.

I was quite surprised to see this photograph sometime last year during an exhibition on World Water Day organised by our Public Works Department. When I was compiling volume 2 of my book, there was an article about the subject matter and I remembered this particular photograph and asked the Water Department whether I could have a copy of this photo to go with my book. Yesterday I received this photograph and a few others.

So, what did he do for a living?

He collected human wastes from toilets. Prior to the 1960s, toilets in the town were mostly bucket toilets. Toilets would be built on raised platform with a bucket underneath it. Someone unfortunately has to go round emptying these buckets. This is the guy who has to do it.

One of my good friends who read this, sent his comments via sms which I reproduced here, "... people called him Si Tok Seng. May be that was his name or mean something else. He used to pick up the thing from houses around SOAS at 5 pm at the time we finished sekolah ugama. He had a tanker. We had to pass the tanker on the way home, the smell was terrible. We used to tease and make fun of him. When he got angry he dipped a brush in his bucket and splashed it at us. We would run like hell to avoid droplets of the bucket content falling on us dirtying our pakaian. Sometimes we got caught had hell to explain at home ..."

According to my minister, the wastes were thrown into the river. At the Rangas Bridge (that's the small old bridge which you can still see on the left hand side by the Edinburgh Bridge when you are heading into BSB) there used to be a copper tube. The copper tube leads directly into the river. So kids who don't know the purpose of the tube used to shout into it.

By 1968, the PWD has installed a sewer line and all the toilets in town were finally connected to the sewer line. And his job finally disappeared.

There are many modern conveniences which the government has built over the years which we take for granted. Sometimes we forget that not long ago, life was not as easy as today.