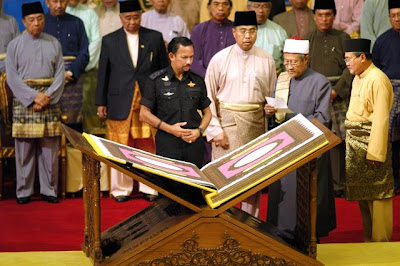 How many people remember this scene?

I was trawling through my hard disk and found this photograph. This was taken about three years ago when His Majesty received the Giant Quran as a birthday gift. I wrote about the whole event and also the history behind it. I am hoping that it will be on display one of these days, if it has not already been done so.

It is not the world's largest Quran, even though it is big. It is not even the most unique, being the 5th Quran to be handwritten by the group that was commissioned to do it. But it is certainly big. The other big one which people can see is the one placed at the Jame' Asr in a glass cabinet.