Bangar Jetty and the 1962 Memorial 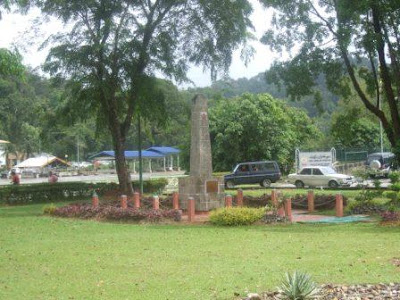 Exactly one year ago, I wrote about the above 1962 monument. Yesterday, I read in the papers about the Minister of Communications laying the foundation stone for the new Bangar Jetty and Terminal Building in Temburong. What is the connection?

At present, if you arrive or depart from Bangar, you would arrive in an open air small roofed structure. There is no other facility there. This $1.4 million structure is at last bringing better comfort to the travellers between Bandar and Bangar. Work started in June last year and expected to be completed by end of this year. For those who knows Bangar but have not been there recently, the terminal has moved to the other side of the bridge. The current terminal is before the bridge but the new terminal is after the bridge. So from next year onwards, everyone would have to go under the bridge before they alight.

According to the press, the new building site is located adjacent to the Memorial Monument. That to me is slightly wrong. The building is site is ON the Memorial Monument. In fact, one of the things which worried me every time I go to Bangar was the precarious condition of the memorial. Prior to construction, the memorial was in a park by itself. But with the new jetty and terminal, the memorial is smack centre in the building works. And that is where it will end up.

According to the architect, that memorial will be left intact and will be in the building when the building is constructed. It will form an interesting monument as that will be the one structure that people arriving and leaving Bangar will see.

So in a way it is good to have the monument in the building. That way, people will be more aware of its existence and the memory of the 1962 event.