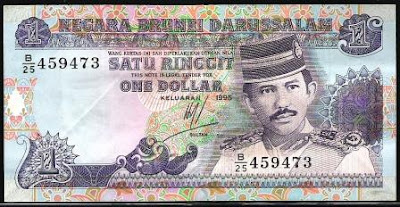 Yesterday I was talking about the Begawan money. Today I am talking about more money but more recent ones. My sister-in-law's husband (my biras) called me up the other day and said that he had discovered an old piggy box where he has been stashing his coins and dollar notes and he found about 15 pieces of the above and 1 piece of a $5 note. He asked me whether I wanted them. Of course, I told him. I asked him whether he got other tabungs that he could look through.

The notes were all used and the valuation would not be very high. About the best one is the one above. The worst has even its corner missing. But give or take another 20 years, even that missing corner note would be worth a fortune. A brand new uncirculated note is currently worth around US$5 but I noticed the prices have been rising. About two years ago, I could still get this for around US$3 but I don't see this price anymore.

The interesting bit is that this paper note first introduced in 1989 and was even reprinted until 1995. These notes are still in circulation albeit in very small numbers. It was in 1996 before the polymer notes were printed to replace this paper note. I bought the $10 note of this series in Singapore for $20 last January. I was given an almost brand new $5 note change by a video store in Yayasan sometime last year.