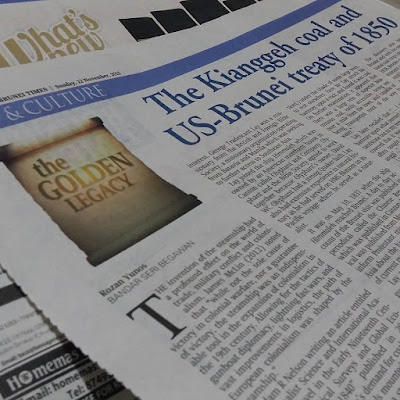 My article was published on my column The Golden Legacy in The Brunei Times on Sunday 22 November 2015:-

THE invention of the steamship had a profound effect on the world of trade, military conflict and colonialism. James McLin (2012) noted that “while not the sole cause of victory in colonial warfare, nor a guarantee of victory, the steamship was an indispensable tool in the expansion of colonialism in the 19th century. Allowing for the tactics of gunboat diplomacy, lightning fast wars, and vast improvements in logistics, the path of European colonialism was shaped by the steamship.”

Adam R Nelson writing an article entitled “Nationalist Science and International Academic Travel in the Early Nineteenth Century: Geological Surveys and Global Economics, 1800-1840” published in 2006 noted that “Britain’s demand for coal to run steam-powered vessels mounted steadily in the 1830s and became a strategic preoccupation of its geological surveys around the world. In this context, the British and the Americans frequently clashed over mineral deposits in far-flung places.”

It was in 1837 that an American vessel, the Himmaleh, sailed along the South China Sea and noted the extensive coal deposits along the northern coast of Borneo.

In 1840, three years after a naturalist on board the Himmaleh had first reported the existence of coal in Brunei, the Royal Geographical Society published a memoir on Borneo which mentioned a deposit of coal on the nearby island of Labuan.

William Buckland, a renowned geologist then noted that if there is indeed coal in Labuan, then Labuan would become a very important station used by steamships travelling between China, India, Australia and the great islands of the Malay Archipelago.

In fact, this is the main reason why the British wanted to acquire Labuan from Brunei and went to great extent in forcing the Sultan to sign a treaty surrendering Labuan with its gunboat diplomacy.

According to Shulman in his book “Coal and Empire” (2015), the American interest in coal found in Brunei had “come about entirely by accident”. It was George Tradescant Lay’s report that brought about the interest. George Tradescant Lay was a missionary from the British and Foreign Bible Society, a missionary organisation operating from Batavia and Manila which was seeking to further access to Southeast Asia.

Lay joined the ship Himmaleh which was owned by an American merchant house in Canton called Olyphant and Company. Olyphant and the Bible Society agreed to work together because Olyphant’s owner, David WC Olyphant had a strong Quaker faith. Lay also had extensive experience in natural history as he had served on HMS Blossom on its Pacific voyage where he served as a naturalist.

It was on May 10, 1837 when the ship Himmaleh reached Brunei. A day to day account of the Brunei visit was published in a periodical called the Chinese Repository which was published in Canton. The periodical was published from May 1832 to 1851 to inform Protestant missionaries working in Asia about the history and culture of China, of current events, and documents.

Lay and a member of the crew became guests of His Royal Highness Sultan Omar Ali Saifuddin II and stayed at the palace. It was while staying at the palace, Lay received a sample of local coal which was brought to the palace for his perusal. He was told that the coal came from a place called the ‘Kianggi’ but no one could tell him exactly where that coal was found. It was not until 29 May 1837, about two days before he left Brunei, that Lay accidentally found the coal seam while returning from a trek outside the Brunei town.

His companion described the find, “… on our return we stopped by the side of a pleasant stream, (the Kianggi, before noticed,) under the shade of some large trees, to rest ourselves. Here Mr Lay struck his hammer upon a rock, and found it was coal. On further examination, it appeared that there was a large vein of superior bituminous coal, easily accessible, being not over a mile from the town, and capable of being transported most of the way by water.”

Lay later recalled that “… I struck my hammer upon what seemed to be a vein of sandstone but to my very great delight, I discovered that it was the very thing I had so often sought for in vain, the coal of ‘Kianggi’…”

Lay published his memoirs of the voyage in New York two years later, and knowledge of his discovery spread very quickly in both Great Britain and the United States.

The British Governor in Bengal tested the Brunei’s coal through local appointed agents and found that the coal appeared to be outstanding steamship fuel. This excited the shipping world as British steamers can now go further and this would also serve to facilitate trade with China by using coal from Brunei and Borneo.

The discovery also interested James Brooke and with his own discovery of additional coal crops identified around Brunei in 1838, Brooke concluded that the British Government need to secure the monopoly and establish a coal station nearby. Brooke eventually managed to carve out an extremely large area from Brunei to eventually build up what is today’s Sarawak.

The acting American Secretary of the Navy, David Henshaw also assigned Captain John Percival and the USS Constitution the task of gaining access for the US to support American steamers in Southeast Asia. In his secret instruction to Percival, he instructed Percival to find coal and purchase such rights if necessary for the United States.

It was in March 1845 when the Constitution arrived in Brunei. His Royal Highness Sultan Omar Ali Saifuddin II warmly welcomed the ship’s expedition with a nine-gun salute. However Lieutenant Chaplin, deputising for the ill Percival, failed to negotiate an agreement with the Sultan and returned empty-handed.

The need for coal continued and in August 1849, the American Secretary of State John Clayton instructed Joseph Balestier, the US Consul in Singapore to undertake a series of diplomatic mission in Southeast Asia including Brunei. It was on June 23, 1850 when Joseph Balestier signing on behalf of the United States and His Royal Highness Sultan Omar Ali Saifuddin II signed a treaty between the United States of America and Brunei called “The Treaty of Peace, Friendship, Commerce and Navigation”.

This treaty outlined the relationship of the United States and Brunei and is still in place today. It was ratified by President Millard Fillmore on January31, 1853, two months before he left office on March 4, 1853 and the treaty was subsequently proclaimed by his successor, President Franklin Pierce on July 12, 1854.

Lastly, an interesting question would be, ‘What would have happen to the history of Brunei if George Tradescant Lay did not discover that coal in Kianggeh?’

The writer of The Golden Legacy column – the longest running column in The Brunei Times – also runs a website about Brunei at bruneiresources.com.